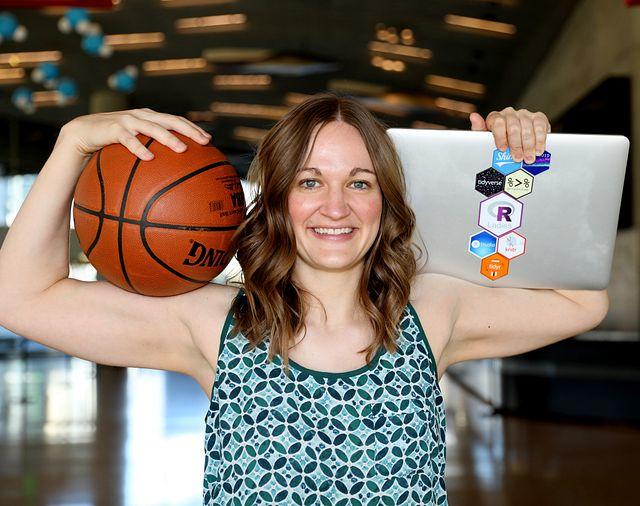 In 2019, Lindsey Dietz hopped on a plane to Dallas. She went to attend a workshop through the American Association for the Advancement of Science (AAAS) IF/THEN, an ambassadorship program that empowers and inspires women in science, technology, engineering, and math (STEM) fields.

In addition to training and networking opportunities, Dietz and the other ambassadors were met with a surprise. One by one, they were sent into a room filled with cameras. They were told they were being 3D scanned, but they didn’t know why. “Something sciency,” Dietz assumed.

Nearly two years later, the scan’s purpose was realized: each ambassador had been recreated in statue form to highlight their work. The 120 neon-orange figures were first displayed in Dallas, and later at the Smithsonian in Washington, DC. 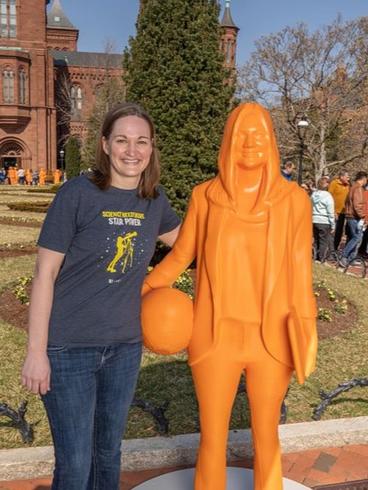 The road to the Smithsonian was a long one. Dietz’s passion for both math and basketball would take her from her hometown of Elk River, Minnesota, to undergraduate and graduate programs at UMD.

Dietz had an accomplished career as a college athlete and earned a spot in the UMD Athletic Hall of Fame. While playing for the women's basketball team, she was the top scorer for four straight years. She was a three-time women's basketball All-American, and she set six school records that she holds to this day, while earning a bachelor's and a master’s degree in mathematics at UMD.

In 2008, Dietz became a Credit Risk Validation Analyst for US Bank. Her job was to review models that helped determine whether or not someone would qualify for a credit card. She did so through data.

After three years at U.S. Bank, Dietz went back to school. She graduated from the U of M Twin Cities in 2016 with a Ph.D. in statistics.

Dietz put her doctorate into action right away. She was hired by the Federal Reserve Bank of Minneapolis and has been there ever since. She helps guide the creation of code and analytics used to provide regular health assessments for the largest banks. Understanding the strength of banks can help prevent failure and subsequent bailouts.

"With a math degree, you can do anything that requires a logical approach to a problem. Those skills can be used in almost every field."

A Leader in STEM

“I always try to volunteer where I can make an impact,” Dietz said. Through her job in the financial sector, she realized there weren't a lot of women entering STEM fields. “That was a place where I could make a difference.”

She began as a speaker with R Ladies, a worldwide organization that promotes gender diversity in the ‘R’ community. ‘R’ is a programming language used for statistical computing.

Dietz and a colleague were inspired. In 2018, they founded a regional R user conference called noRth. Additionally, Dietz became a co-organizer of the R Ladies-Twin Cities chapter.

Her volunteer work with R Ladies and noRth led Dietz to apply for the AAAS IF/THEN ambassador opportunity. The ambassadorship program’s goal is to empower current STEM innovators, like Dietz, while also inspiring the next generation of pioneers.

In a world that can discourage young women from pursuing careers in STEM, Dietz wants to make a difference. “It really takes just one good experience for girls to continue in these spaces,” she said. “I hope that I can be the difference, at least for a few girls.”