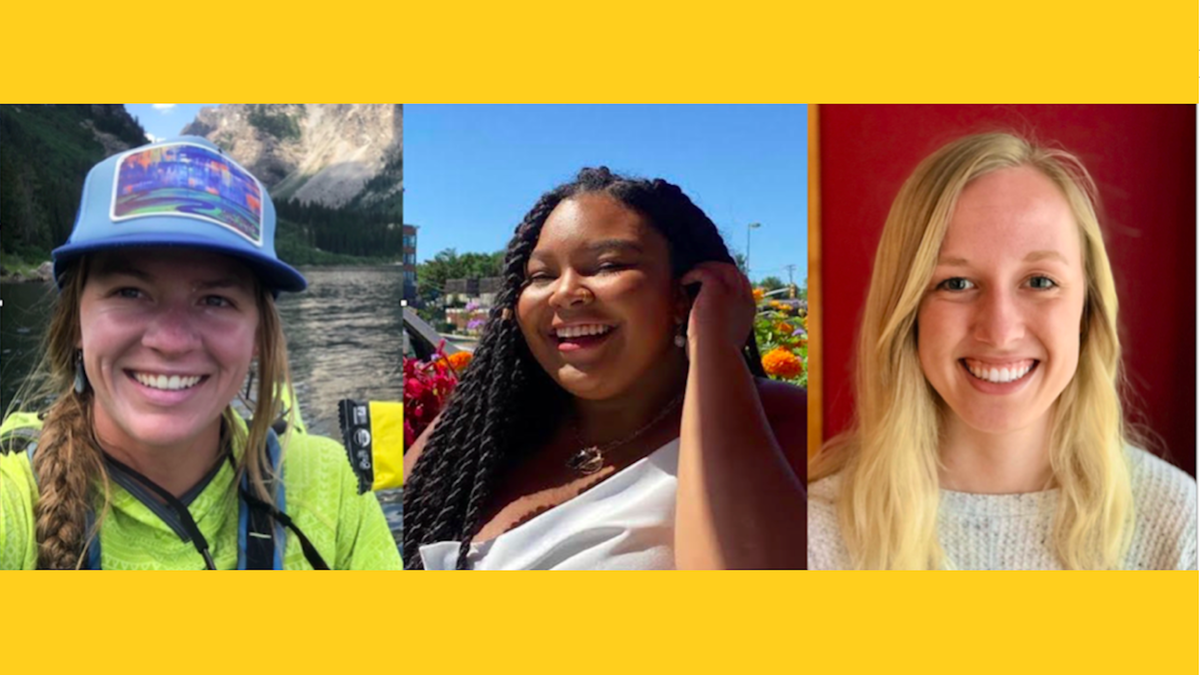 Recent graduates and their careers

Priya Sulzer. It’s the last day of a four-day kayaking trip. Priya Sulzer makes her way through the Snake River in the Grand Tetons. She faces ruthless winds as she leads her group downstream.

Myka Dixon. Seated in her vanity, Myka Dixon taps the record button on TikTok. Many of her 75,000 TikTok followers watch her video minutes after she applies her makeup. This is how she starts her day as an influencer relations specialist and content creator at Sigma Beauty.

Izabel Johnson repeatedly clicks refresh until the front page of Pine Journal appears. She sees her news report on the cover-up of factory asbestos use. Her story about finding 6,000 people who were potentially exposed after working in the Conwed Factory is finally released.

Growing up in De Pere, Wisconsin, Sulzer always had an interest in outdoor activities. When the time came to select a college, Sulzer toured one school, UMD.

While there with her parents, a professor mentioned classes available. “Hearing that UMD had winter camping definitely drew my eye,” Sulzer says. Her interest in camping and the outdoors made her decision to choose UMD an easy one.

She utilized nearly every outdoor activity and opportunity that UMD had to offer. Starting with weekend trips to the Boundary Waters, Porcupine Mountains, and the Apostle Islands through the Outdoor Program. After participating in these trips, Priya worked through UMD's Recreational Sport Outdoor Program as paddle, surf, and kite staff.

Sulzer graduated in December of 2017 with an Environmental and Outdoor Education degree, then packed her bags and moved to Wyoming where her three brothers reside.

She received an opportunity to work at Rendezvous River Sports, where she still is today. Her job is to take people out on overnight sea kayaking trips on Jackson Lake in Grand Teton National Park. When she returns from trips, she also teaches kayaking and stand-up paddle boarding while guiding people down the Snake River.

Everyday is an adventure for Sulzer. She recalls one dramatic moment where she and her friends were split-boarding and had a miscommunication with the map. “We jumped off the wrong side of the mountain.” They were miles from their original route and finally arrived at a remote cabin, “when it was dark,” Sulzer says. She and her friends had to improvise to start a fire and boil snow for water. “It was definitely scary,” she says.

When Dixon was young, she remembers begging her mom to buy her a camera so she could create YouTube videos. Fast forward to today, her full time job is content creation.

Dixon graduated from UMD in December of 2020 with a journalism major and communications minor. She was then hired to work as a social media and content assistant strategist at SomeGreatPeople in Minneapolis.

Through building professional relationships and connecting with co-workers, she landed her full-time and current job at Sigma Beauty.

Recently, while strolling through the Rosedale shopping center, Dixon glanced up and gasped as she saw a massive mural. It was a photograph of herself modeling for a fall campaign.

Dixon says seeing herself as a model is surprising. “It’s all insane to me.” But still, she continues. Dixon is a full-time content creator at Sigma Beauty and an off-the-clock body positivity influencer.

It was just another day on the job for Johnson when she found there was a window of opportunity for a story in her hometown of Cloquet. Johnson says, “We were brainstorming and one of my editors wrote ‘funeral homes in cloquet’ in our shared google document.”

Johnson graduated from UMD in December of 2020 with a major in journalism and a minor in communications. Her first job after college was as a reporter for Forum Communications. She wrote for the Pine Journal and other publications.

The funeral home question piqued her interest so much, she teamed up with another UMD alum, Duluth News Tribune reporter, Brady Slater, to find out why so many funeral homes opened in the 1980s.

Johnson says, “People were dying of asbestos poisoning from a factory.” A factory in Cloquet. A factory called Conwed that used asbestos in the production of ceiling tile and other products. After digging through numerous court records and recording dozens of interviews, the story unraveled. Johnson says, “It all felt extremely important because the whole story had never been told from start to finish.”

These days, she’s added a new outlet to her writing career. She also founded a blog called  “Unscripted”.

In just a few short months, these women have made their mark. Like so many graduates from UMD they have taken traditional, and not so traditional paths, to create positive change.

This story was written by Maija Johnson, who is majoring in journalism. Maija works with Cheryl Reitan in University Marketing and Public Relations.