Mother’s Love and a Volunteer Career 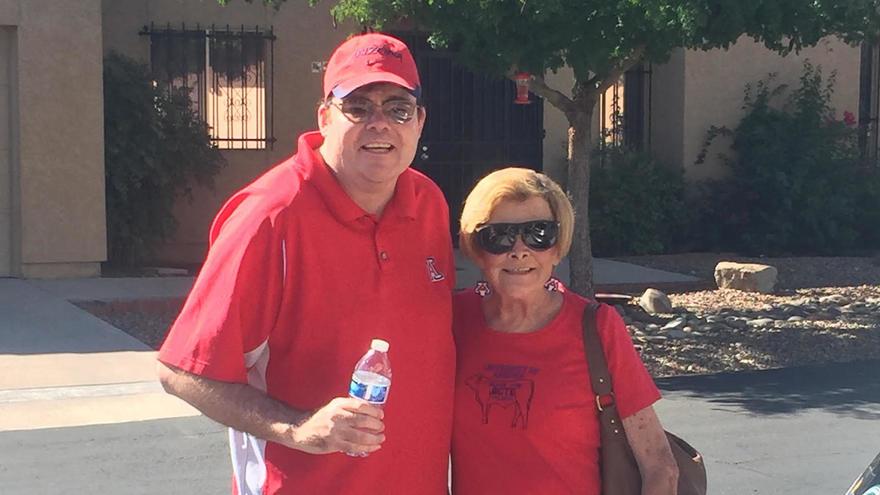 by Cheryl Reitan and Maija Johnson

It was 2010, and a hot day in Tucson, Arizona when Margaret “Peg” Haley Kepner ’68 had an opportunity of a lifetime. She boarded a plane headed to Washington D.C. Kepner had been serving on the Arizona Governor’s Council on Developmental Disabilities before she was appointed to the National Association of Councils on Developmental Disabilities (NACDD). On this first NACDD trip, she had been invited to meet legislators on Capitol Hill, along with the others on the national council. It was far colder in Washington when she arrived.  She hadn't packed enough warm clothes.  “I flew alone and got to the hotel by myself,” she says. That’s where she met the council members from other states.

During the course of that stay, she and the rest of the committee met with senators and congressmen. One of their goals was to encourage the U.S. government to ban the use of derogatory terms that refer to people with disabilities. Kepner says, “I had appointments with everyone.”

As the lone committee member from Arizona, Kepner met with her representatives. She was ushered into Senator John McCain's office in the Hart Senate Building by one of his staff and spoke to the senator for a long time. “I also met congresswoman Gabby Giffords,” she recounts.

That trip and the others that followed were ultimately successful. The committee members convinced their representatives to replace the term “mental retardation” with “intellectual disability” and "cognitive and/or intellectually disabled" in a myriad of federal documents. Kepner celebrated, "Yes... a victory!"

For years, as part of the national association, she would frequently fly from Arizona to Washington D.C. Kepner enjoyed helping national leaders understand the importance of making changes. Kepner remembered that Senator McCain, “wanted to get special education in schools and he wanted to have it integrated to make life in Arizona more fair and equitable.”

It was a long journey from UMD to Washington, D.C. Kepner graduated from the UMD majoring in speech communication, married, had a child, and was left a widow. And through it all, she persevered.

In 1966 at UMD, Kepner met her husband, Richard, who was in the Air Force ROTC program on campus. Their UMD years were happy ones and they participated in many activities together. In fact, a 1967 Statesman newspaper notes that they were both counselors for the incoming freshmen. In 1968, they graduated and in 1969, they were married.

Richard joined the Air Force as a pilot, became a USAF captain, and the couple moved to an airbase in Selma, Alabama. Their son, Jason, was born in 1972 and after a short time, the couple and Jason’s doctors grew worried about Jason’s progress. Years later,  he was diagnosed with autism.

Richard was killed in 1976 on a military mission while the couple was living in Valdosta, Georgia. Encouraged to move closer to a dear friend, Peg Kepner’s next stop was Arizona. “I got off the plane in 1977 in Phoenix with my son Jason and the temperature said 114 degrees, and I thought to myself, ‘What did I just do to myself and my child?’ ” she laughs. But she found she enjoyed the heat, so after another move to Tucson in 1980, Arizona became home.

Making a Difference for People Who Have Disabilities

Throughout her years in Arizona, if she heard about anything affiliated with disabilities in the state, Kepner made sure to be a part of it. Today, Kepner says she has “passed the baton to the next generation,” and has cut down on volunteering. She currently only volunteers for one organization. She’s a disability advocate on the board for “Big Brothers, Big Sisters,” a non-profit organization in southern Arizona.

Because of her son Jason’s autism diagnosis, in 2010, Kepner set up the Peg (Haley) Kepner Autism Program Scholarship at UMD.  The scholarship supports students who demonstrate exceptional passion and devotion to working with individuals with an autism spectrum disorder.

Kepner and her son, Jason, still live in Tucson. Jason leads a full and happy life with his mom, aides, and friends. In the same way she helped move other students into the dorms on Move-In Day, she helps those around her. Through her gifts of service to her community and her scholarship at UMD, Kepner surrounds herself with love.

This story was co-written by UMD student Maija Johnson, who is majoring in journalism. Maija works with Cheryl Reitan in University Marketing and Public Relations.