A Championship, Challenges, and Success 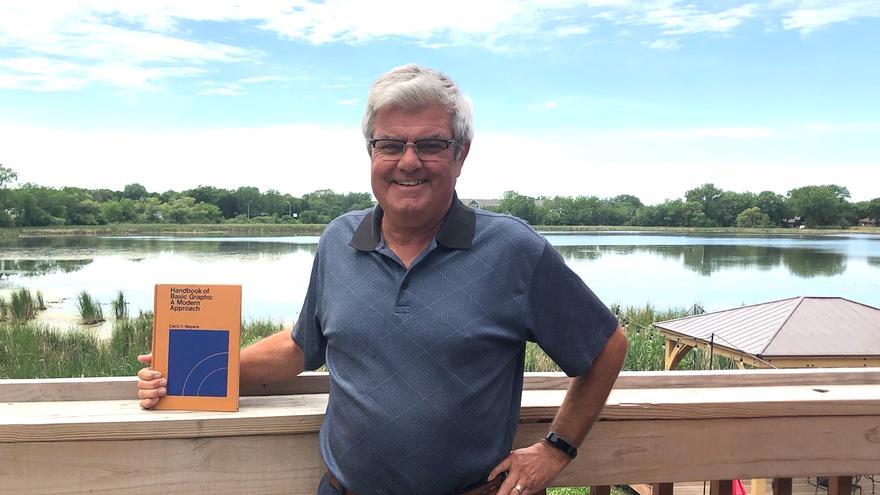 Robert “Bob” Meyers graduated from UMD in 1975, but not before he had a couple of “wins” to his name. He made the news while he was at UMD and has continued to make news on the state and national scene.

It was 1974 and time for the College Computer Game competition, held in St. Paul, Minnesota. Colleges and universities across Minnesota were gathering their nine-person teams. Meyers was intrigued and started recruiting members, but only fellow student Arvid Jedlicka was able to take the time to travel. “It was just me and Arvid against everyone else,” Meyers says.

There were nine teams competing and eight of them had the full roster of members. Each group made basic business decisions which were compared with pre-programmed information on the computer.

Cecil Meyers in Cina Hall, in the first business school computer lab. It was 1972 and UMD had just purchased a Wang 700A, a programmable calculator.

The UMD team won the state championship of the college computer game competition. It made the newspapers and became a highlight of Meyers’ UMD experience.

Meyers has always enjoyed a challenge and when his UMD computer programming class instructor invited the class to solve a problem, he jumped at the opportunity. The teacher said,  “If any of you can figure out the answer, I will give you an ‘A’.” Meyers took on the challenge, he worked Friday, Saturday, and Sunday. He programmed the problem into a computer and he found the answer.

His teacher and the class had a surprise when Meyers brought in his work. He showed them the step-by-step proof of the equation and the justification for each step. He didn’t do it for the grade, because he already had an “A” in the class. “I did it to prove that it could be done,” he says.

It’s All in the Family

When Meyers looks back at his days at UMD he remembers, “some of the great teachers in the business and economics program: Wayne Jesswin, Jerrold Petterson, and Fawsi Dimian.” He also remembers his dad, Dr. Cecil H. Meyers, who served at UMD from 1949 - 1979 as a professor and head of the UMD Department of Economics. Cecil Meyers authored the textbook "Elementary Business and Economic Statistics” and gave programs for small business owners. He also co-founded the Duluth Business Index and pioneered the establishment of the UMD Bureau of Business and Economic Research.

That’s when entrepreneurial activities began. Since 2006 he has been CEO and majority owner of FMH, Inc. a US leader in electrical engineering, design, control panel manufacturing, wire harness, and cable assembly. He was CEO, CFO, and sole owner of FPD Power Development Inc., one of the Midwest’s largest electrical construction companies specializing in utility power plant construction and modernization until it closed in 2020. Meyers also served as the CEO of Verispace, Inc. a large public data center located in Edina, Minnesota until its sale to DataBank Data Centers in 2013.

The list of companies that Meyers was involved with goes on. He was the former CFO, president, and later became the CEO of Transport Corporation of America, Inc. (Transport America). He took it public in late 1994. That company is one of the nation’s largest and most respected public truckload carriers and Meyers was the principal architect of the company’s information technology systems and was responsible for its numerous real estate properties throughout the United States and Canada.

Meyers was the founder and president of MicroMation, Inc., a successful software development firm. He was also CEO and owner of Minnesota Clay and participated and helped manage numerous startups during his business career.

There's a lot of pride in the fact that Meyers has helped so many firms, and created and saved so many jobs. There's pride too in his family. He won't let you forget that he is married to Annette, his wife of 46 years, and he has four grown children.

Banner photo (above): Robert Meyers with his father's book, Handbook of Basic Graphs: A Modern Approach.

About the UMD Accounting and Finance Program.