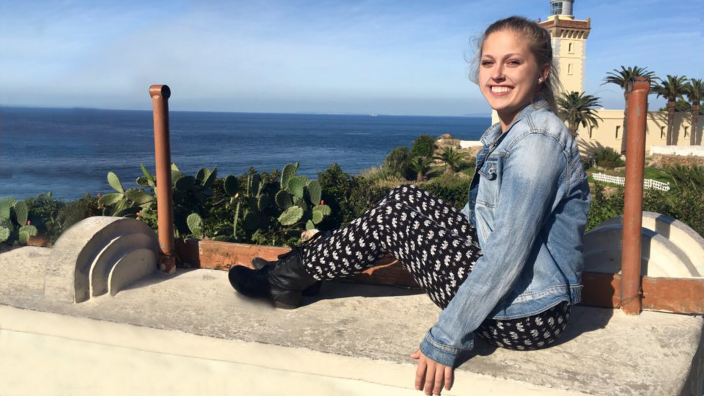 The experiences of two UMD students highlight the name change of a department in College of Liberal Arts. The name World Languages and Cultures replaces the former Foreign Languages and Literatures.

“I think it’ll be beneficial to the department, and it will attract more students because the name gives a global view,” says Rachel Menke, a Hispanic studies student (shown above). “Culture is more of an umbrella word which includes literature, art, food, architecture, and customs. I give this decision a score of 10 out of 10 points.” Rachel, a senior, has studied abroad in Spain twice. UMD’s short-term course in Salamanca was her first experience, and the second time she spent the fall semester in Madrid. "Learning a language and speaking with locals helps you see the differences in lifestyles between the United States and Europe," she says. She has also visited other countries: Italy, France, England, the Netherlands, Morocco, Germany, and Portugal! 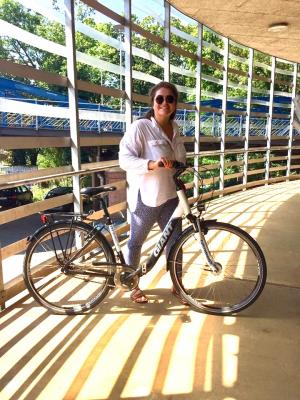 Senior German Studies major Madelaine Sinclair agreed with the name change. “When I study a language, I get a deep understanding of the culture as well.”

Not only did she participate in UMD’s study abroad course in Berlin, Germany in May 2016 in order to study the language and culture, this past summer she researched the energy transition and implementation of renewable energies in Switzerland, Germany, and Sweden. "On short visits and long trips, I found that knowing the native language is extremely beneficial," she says. "Just walking in the neighborhood where we were staying and buying groceries brought us an appreciation of new ways of thinking."

Madelaine is currently enrolled in the class Sustainability in German-speaking Cultures, a UMD course taught in German that focuses on examples of successful sustainable development and the larger cultural background behind these practices.

While on a family vacation, Madelaine strolled through the streets of Budapest, Hungary, and she bumped into a German couple. She had a conversation with them in German. “My parents were so excited because they had never seen me speak German before,” she says. She felt gratified knowing she could put the skills she learned in class and while traveling abroad to use.

ABOUT THE NEW DEPARTMENT NAME

The department faculty feel the name change expresses the breadth of the course offerings and programs of the department. "This reflects the changing nature of our programs,” says Dr. Kristen Hylenski, former head of the department. She mentioned the Cultural Entrepreneurship program, as well as developments in the increasingly interdisciplinary academic fields. “Our mission, as always, remains firmly committed to educating globally competent citizens," she says.

Madelaine credits learning a language and traveling abroad with making her more confident, conversational, and independent. "I feel more prepared for the work world," says Madelaine. "Wherever that takes me."

Rachel is ready to hop on another plane. She has a little advice, “Pack your bags light, because you’ll want to get a lot of souvenirs.”

About World Languages and Cultures