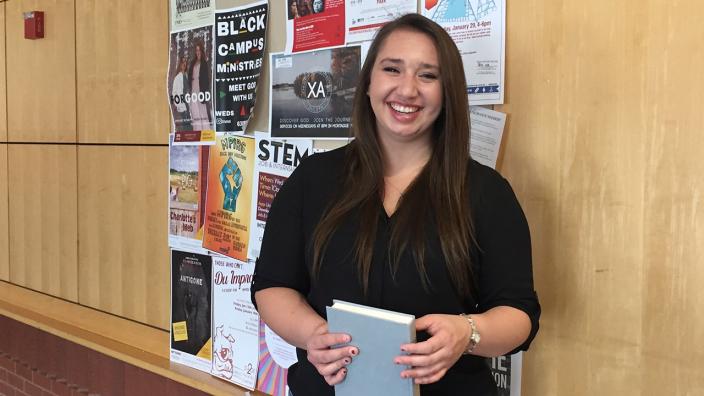 The study of philosophy and psychology helps Samantha Woller investigate violence against women.

During the first few days of her freshman year at UMD, Samantha Woller walked down the library hallway and read the fliers posted on the walls. Dozens of organizations and clubs were looking for members and volunteers. “I wanted to get involved with everything,” she says. That’s when she stopped at a plain gray flier that announced volunteer training for the Program to Aid Victims of Sexual Assault (PAVSA). “I took one of the little tear-away tabs with contact information and sat down on a bench and called my mom. I told her that it was something I just had to do.”  A week later, Samantha attended the UMD volunteer fair and saw the Safe Haven table. “Again, I had the feeling that I had get involved.” Those two moments were the beginning of Samantha’s journey as a UMD student, a community volunteer, and a student intern.

Samantha, who is a philosophy and psychology double major, gave volunteering her all. At PAVSA, a rape crisis center that helps area residents cope with the aftermath of sexual violence, she served in several capacities, including answering the crisis line and providing crisis counseling.

At Safe Haven Shelter and Resource Center, Samantha helped provide services to women, children, and other survivors whose lives have been affected by abuse. She took on dozens of tasks including answering police and crisis calls, assisting with child care and activities for kids, providing resources, and most important, providing a listening ear and emotional support.

Her community work influenced her research and her class choices. “I was taking courses in philosophy at the same time as I was volunteering, and it made me want to explore more about how and why abuse is so prevalent in our society,” Samantha says.

Her philosophy classes with Associate Professor Jeanine Weekes Schroer and Samantha's participation in UMD’s Honors Program led her to research, “I realized that philosophy, specifically existential philosophy, could help me learn more.”

Samantha is interested in graduate school after her May 2018 commencement, so she is keeping that in mind as she works on her Honor’s thesis. She is combining her interest in philosophy with her experience as a volunteer. She and Dr. Schroer have spent months talking through the issues and narrowing the focus of Samantha’s work. They’ve looked how race, class, and gender intersect.

“I’m not writing about the history of assault or how to do crisis counseling,” Samantha says. “We all assign meaning to behavior. I want to learn more about culture of sexual expectations know why the broader culture constructs a society that allows and even encourages abuse." Her thesis topic centers on society's view of women who have been abused and the rape culture concept.

Compassion has drawn Samantha to a tough topic. She says that in her volunteer work, “What matters is that the victims understand that it was not their fault, that we believe them, and that their stories will remain confidential.” In her work as a scholar, she seeks to find out why.

From the first time she took a phone number from a flier, Samantha has taken action, sought knowledge, and inspired her fellow students.