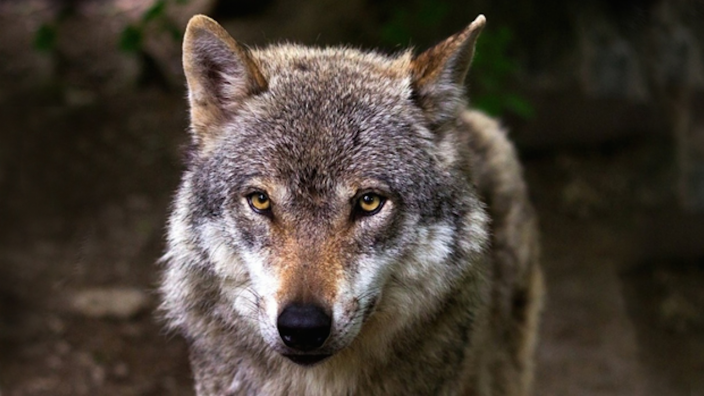 Have you ever seen a wolf in its natural habitat? If you have, consider yourself one of a lucky few.

It’s more likely you have heard or seen one of the more prevalent coyotes. The progressively shrinking wolf population has motivated many researchers, like graduate student Jessica Rick and undergraduate student Stephanie Grewenow, to find answers.

The problem
Jessica said the reason we rarely see wolves today began in the early 1600s, when European settlers hunted wolves. She said, “Hundreds of years ago wolves resided across Northern America, including Minnesota. By the early 1900s very few wolves remained. In the 1970s, when the endangered species act was established, wolves were on the first list.”

As the wolf population dwindled in each area, the coyotes took advantage of the unclaimed territory wolves left behind. Jessica explained, “Coyotes are opportunistic omnivores; they are willing to make use of whatever is available to them. When the wolves left their territory, coyotes moved in.”

Not only did the coyotes take over the abandoned territory, but they also began to cross breed with the remaining wolves. “Originally, the hybridization began in the East Coast, moving west. As coyotes moved in, the male wolves mated with smaller female coyotes,” Jessica said.

Tracing Ancestry
Like humans, the wolves’ mitochondrial DNA tells their history. The research plan involves tracing the coyote-wolves hybridization back to a geographical area by analyzing the wolves’ DNA sequences.

For many, analyzing DNA sequences of wolves in a genetics lab sounds like a headache, but for Stephanie, it’s an opportunity. Stephanie, a senior, is double majoring in Communication and Cell/Molecular Biology. She said, “Genetics is an area of study that can be applied to humans, animals, plants — you name it. It’s fascinating when you think that what you are doing is applicable across disciplines.”

Applying personal motivation
Stephanie became involved with the wolf-coyote hybridization research when Jessica, her former genetics class teaching assistant, introduced her to undergraduate research opportunities outside of the classroom.

Because of her strong interest in genetics, Stephanie decided to apply for the BURST program so she could dig deeper into the roots of the once pervasive wolf population. “The BURST projects are unique because they provide real-life exposure to what it’s like to be a researcher, while at the undergraduate level,” said Jared Strasburg, assistant professor in the Department of Biology and Stephanie's research mentor.

As a summer 2015 BURST student, Stephanie receives full-time compensation for a summer of researching. She explained, “It’s definitely different being in the lab for forty hours a week, but it’s rewarding because I can devote my summer to something I’m passionate about, and I don’t have to worry about finding another job to maintain an income.”

More than research
Although the BURST project lasts for ten weeks, Jared and the biology department have further expectations. “Ideally, we want to see each BURST project turned into an article in a peer-reviewed scientific publication. The project, combined with an undergraduate publication, creates a one-of-a-kind opportunity for the students,” Jared said.

Stephanie explained, “After this summer, I plan to write the paper portion of the project. The goal is to publish it before I graduate in the spring of 2016.”

Along with a potential publication, Stephanie gave a poster presentation on her BURST project to the Midwest Population Genetics Conference in Ann Arbor, Mich. in July 2015. She said, “It was exciting to have the opportunity to attend this conference and take my research one step further, by discussing my findings with other professionals in the field.” Jessica presented an oral presentation on a related topic at the same conference.

The BURST project isn’t Stephanie’s first time experiencing the research side of academia; in fact, she successfully completed an Undergraduate Research Opportunity Program (UROP) her junior year, where she analyzed relationships among wolves using mitochondrial DNA.

The road ahead
Upon graduation, Stephanie plans on attending graduate school to eventually receive her Ph.D. in genetics. “Ideally, I hope to be a professor so I can have the best of both worlds; teaching and researching,” she said.

Jessica will complete her master’s degree in December 2015, with the goal of pursuing a Ph.D. Like Stephanie, Jessica dreams of becoming a teacher. “It would be extremely rewarding to help others learn about something I’m very passionate about, such as genetics,” she explained.

The BURST program continues to open doors for students like Stephanie, by showing undergraduates the world of biology research.

Visit BURST for more information or to support student researchers in the BURST program.

Does a career in biology sound interesting? Visit the UMD Biology Department website