Faculty and Students Contribute at Summit 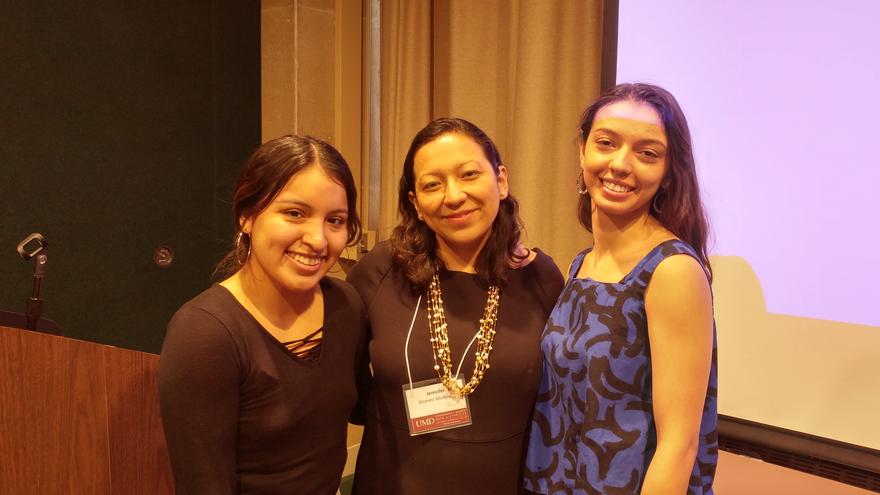 The 2019 UMD Summit on Equity, Race & Ethnicity: Equity & Justice for All?  was held on Wednesday, February 27. Associate Professor Jennifer Gómez Menjívar (above center), from the Department of World Languages and Cultures (WLC), and two of her students, Odalis Palchizaca Angamarca (above left) and Ruth Kristensen Cabrera (above right), presented the session, "Minesotanos: Oral Histories from Minnesota's Latina/o/x Community."

Professor Gómez Menjívar presented information on the long history of the Latina/o/x community in the Midwest in general and Minnesota in particular. Then the students presented oral histories of Latina and Latino Minnesotans, also known as "Minesotanos," highlighting the experience of a Minesotana from an Incan community in Ecuador as well as a Minesotano from Texas and Illinois whose family has lived in the United States for centuries. The oral histories presented were final projects for SPAN 2540 (Latina/o/x Literatures and Cultures), which Dr. Gómez Menjívar taught in fall 2018.

WLC Assistant Professor Carol Wallace also presented a session, "'Hispanic' is Not a Race: The Persistence of Stereotypes", in which she looked at dominant-culture narratives of what a Latinx person is and how those stereotypes play into current political debates. She spoke of the great diversity of the people often lumped together into a single category of "Hispanic and shared spoken-word poetry videos that speak to a variety of experiences.

Gómez Menjívar and Wallace are both members of the UMD Commission on Equity, Race & Ethnicity (CERE), which organizes the event.

Learn more about the Department of World Languages and Cultures.