Confronting Violence and Inequality in Honduras 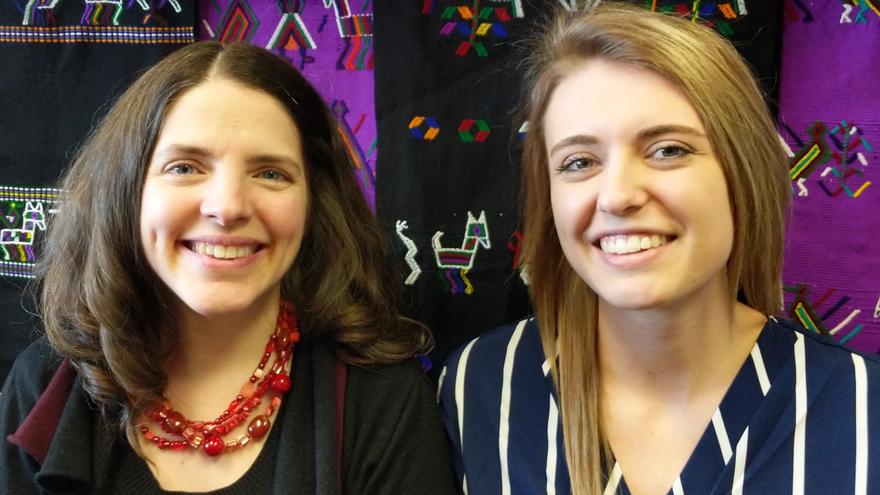 The first time Kayla Ness stepped off a plane in Honduras, when she was still in high school, she felt she was home. During the summer of 2018, she returned to the city of Tegucigalpa to work with elementary school children at Nueva Esperanza (New Hope), a ministry and daycare center. Kayla’s calling was not only to the beauty of Honduras and its people, but to work with Hondurans to help alleviate the constant burden of poverty and violence.

There were multiple gang shootings over the course of the 2018 summer as well as bus strikes and road closures. In one week alone, a gang shooting killed 15 people including the relative of a Nueva Esperanza staff member. Another staff member was robbed, a mom was assaulted, and the nephew of another staff member was shot at point-blank range. Five direct victims of this violence were members of the Nueva Esperanza, two of them women.

“The day after the gang shooting our youth especially (ages 12-18) came and said they had friends or family that died or were injured,” says Kayla. They all knew someone.

Kayla talked to moms and heard heartbreaking stories of violence and starvation. Post-electoral violence in January 2018 made the situation worse, as families lost everything and were starving because there was no food production and the grocery store shelves were empty.

Many mothers of the children at the center were coerced into exchanging sex for shelter or food. "For the moms, they say it is all they can do to provide for their children and they have nowhere to go," Kayla says. “The whole concept of survival sex is something I had not encountered until we talked with our youth and kids. They see it in their homes.” Nueva Esperanza works to break that cycle.

Kayla’s journey has taken her through many steps, including taking a class in Latin American Politics and Development in spring 2018, before spending the summer in Honduras. In fall 2018, she started working as a research assistant for Dr. Shannon Drysdale Walsh, an associate professor of political science

Kayla works with Walsh to investigate state response to violence against women in Central America. Walsh recently published an article about gender violence and impunity in Honduras that directly relates to Kayla’s experiences.

Walsh says, “It is inspiring to work with Kayla. She is not only smart and hard-working, but she is also driven by a deep commitment to Honduran families. UMD offers wonderful opportunities for students and faculty to share their international experiences in ways that help us all develop as global citizens.”

In the past decade, Walsh has spent almost two years conducting field research and interviews in Central America. She draws on this fieldwork in her political science classes. Students engage in service learning with organizations in Guatemala such as the Bisán Solidarity Project, which has a weaving cooperative. As shown in the photo above, artisan textiles that help women have an independent form of income decorate Walsh’s office.

As a research assistant, Kayla has helped Walsh update data for her upcoming book, articles, policy papers, and testimony as a pro bono expert witness in federal court on country conditions of violence against women in Central America. Kayla says that after her experience in Honduras, “It was easy to jump into Shannon’s work.”

At Nueva Esperanza, women and children were often victims of the violence that Walsh discussed in class. Kayla saw the failures in state response to violence in her readings. She knows what would happen if you were a victim of violence in Honduras. Kayla notes that “you would go home and just deal with it. The state really doesn’t respond at all.”'

After coming back from Honduras, Kayla says that it is exciting to help Walsh prepare research, such as a report for Congress or policy paper. “Doing that work is super-empowering because I know the people that this research will impact if its purpose is fulfilled,” she says.

Kayla is set to graduate in May and has already transitioned into her new job working with Sezzle, a start-up company in Minneapolis that helps to improve consumer credit for economically and ethnically diverse populations. Her knowledge of the Spanish language helped her secure the job.

Kayla has worked with Nueva Esperanza through her church since she was a teen and sees herself returning to Honduras again. “Helping women in Latin American countries is a passion of mine.”

About the Department of History, Political Science, and International Studies