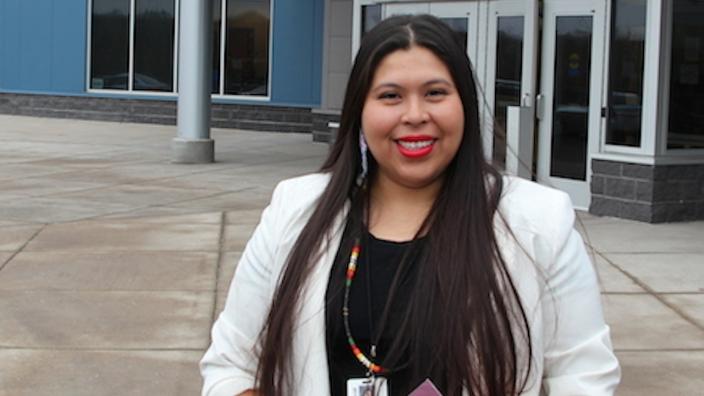 It all made sense as Veronica got older. She never imagined that all of the rituals, prayers, and lessons she learned from her family would steer her toward a path of working in education.

Veronica Kingbird-Bratvold landed a position as the American Indian Cultural Liaison for the Duluth Edison Charter School, just months after she graduated from UMD in May 2015. She works specifically with Native students to give them a positive experience with Native culture and she has even launched the school’s first Introduction to Anishinaabe Studies course as well as a new Anishinaabeg Club.

It was her experience at Leech Lake Tribal College (LLTC) that brought Veronica closer to her culture. In the hallways, she walked through a sea full of Native faces. All these people shared a similar family upbringing with her. From her first day on that campus, she felt she could carry her culture with her instead of saving it only for evenings at home. At LLTC Veronica started to learn Ojibwemowin, the Ojibwe language, with her peers. Her time there was brief, only two years, but as she made the move to Duluth to start her undergraduate program, she brought along a strong feeling of belonging to an Anishinaabe culture.

At UMD, she enrolled in the American Indian/Native American Studies program. She minored in Environment and Sustainability, audited Ojibwemowin classes, and always kept her focus on her connection to Ojibwe heritage.

She and Lucas Bratvold, another UMD alumnus, were engaged before they came to UMD and they married in the summer of 2015. While at UMD, Veronica and Lucas worked on GreenStep Cities, an environmental project. "Leech Lake has always been conscious of the environment,” Veronica said.

With close connections to Leech Lake Band of Ojibwe from their time at LLTC, Veronica and Lucas connected GreenStep Cities tools with the Leech Lake Department of Resource Management. The tools looked at building and lighting; land use; economic and community development; transportation; and environmental management. She said. "It was good to work with leaders to document everything Leech Lake has done and plan new steps to take." See the GreenSteps-Leech Lake Band of Ojibwe video.

All of these adventures have come together in Veronica’s new role at the Charter School. Language, the environment, and appreciation for her rich Anishinaabe upbringing are all part of what Veronica brings into the classroom with her. However, the journey hasn't stopped as Veronica is now getting a masters degree in education. One of her goals is to improve and change the education system for Native students.

“I was fortunate enough to have great Native influences throughout my life and I want my students to have that as well, so they can inspire other Native youth in the future.”