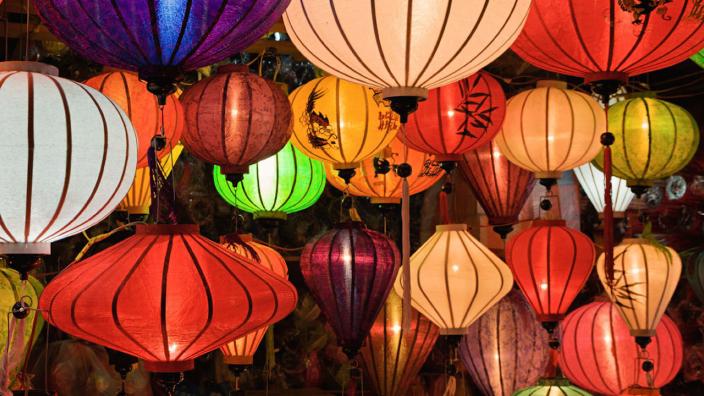 All around the globe, the number of people studying Mandarin Chinese is growing. UMD students have joined the surge. 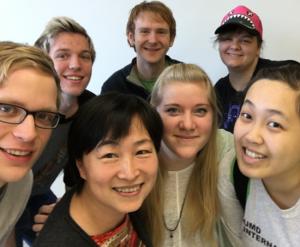 There are lots of reasons the study of Chinese is growing. Some are interested in Chinese culture; others want to travel or study abroad in China, and still others want to be able to work with a company doing business in China.

Simon Werber-Krause, a senior who is double majoring in economics and Chinese Area Studies said he, “loved Chinese culture since I was at Minneapolis South High School.”

His interest didn't fade. In 2014, he traveled with a UMD friend to Dalian, a city in Northern China, and they visited her family.

That's when he really got hooked. Simon used the Chinese Area Studies program to make more travel dreams come true. In fall 2015, Simon studied abroad at Shanghai East China Normal University. “Everything seemed familiar to me," he said. "I got used to the life in China pretty fast.” He was pleased to finish the study abroad program with a good grade. His proficiency is so good, he plans to go to graduate school in China.

Calvin Miner attended college in Illinois and held a high tech job in Wisconsin before he came to UMD. At his Wisconsin job he became interested in electrical engineering, and when he traveled to Japan with a friend, he became fascinated by the cultures in Eastern Asia.

He followed both of those paths at UMD by working on an electrical engineering degree and studying Chinese.

The four semesters of Chinese language he took have been rewarding in and out of the classroom. “Our professor invited us to her house to make Chinese dumplings together and to watch movies in Chinese,” Calvin said. “It was great.” He graduates in a few months and hopes the skill he has gained in Chinese will help him find a job in China at an international corporation. 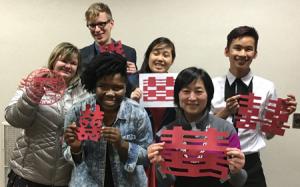 Playing with scissors is part of the language class. The group cut out the figure "double happiness" in honor of the Chinese Year of the Monkey. Back row (left to right): Stephanie Zanmiller, Calvin Miner, Mai Che Lee, and Devon Diaz. In front are Sharon Love Tweh and Professor Weiqing Zhang. 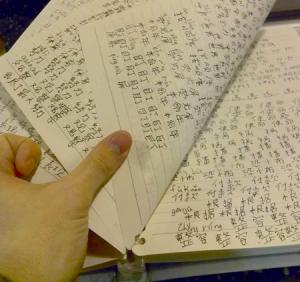 Playing with scissors is part of the language class. The group cut out the figure "double happiness" in honor of the Chinese Year of the Monkey. Back row (left to right): Stephanie Zanmiller, Calvin Miner, Mai Che Lee, and Devon Diaz. In front are Sharon Love Tweh and Professor Weiqing Zhang.

The students in the Chinese Area Studies program are able to choose one of UMD's three study abroad programs in China. They also have many classes to choose from, such as Chinese History, Asian Philosophy, Chinese Traditions and Contemporary Values, Chinese Business and Economics, and Twentieth Century China Politics.

UMD has offered the major since 2013 and its language class is popular. This spring, more than 20 students from various majors are taking Mandarin.

The class is taught by Weiqing Zhang. She came from Beijing to UMD in 2013. Now in her third year, she says, she loves all her students in the Chinese language classes. “Of course, they felt confused when they started to learn Chinese, but they picked up ideas and methods fast,” she said, “I am so proud of them.”

Prof. Zhang used a Chinese expression when she described her students, “They are my ‘happy nuts.' They are all very lovely.”

Find out more about the Chinese Area Studies program.