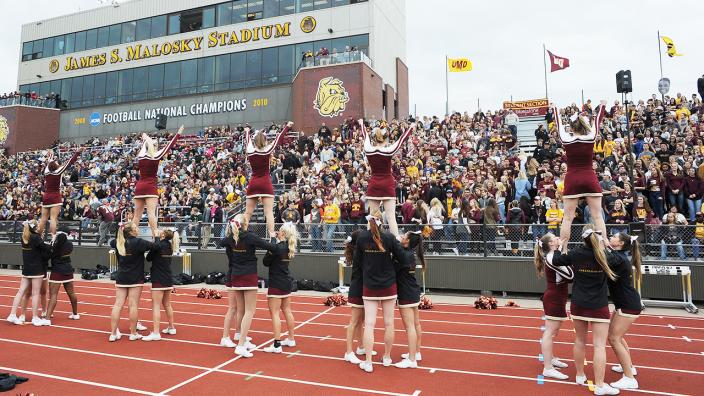 The results of an economic impact study are announced.

UMD’s Bureau of Business and Economic Research (BBER) reports that UMD Athletics, through its annual hosting of athletic contests and operational spending, creates more than 250 jobs and brings nearly $26 million in total economic output to the Arrowhead region’s economy.

BBER conducted the study for the UMD Department of Intercollegiate Athletics and UMD’s Marketing and Public Relations department to gauge the economic benefits generated by Athletics.

"We wish to thank the community for their great support of the Bulldogs which enables much of the economic activity,” says Josh Berlo, Director of Intercollegiate Athletics. “Bulldog Athletics is proud to play a role in driving the regional economy. We have and will continue to be proactive in securing additional tournaments, conferences, and NCAA events which furthers this important impact.”

BBER found that Athletics contributes to the local economy in three ways:

UMD Athletics spends nearly $6 million per year on operation expenses, approximately half of these funds are externally generated. This includes both the wages and salaries for its 64 employees, transportation, purchasing equipment, and other departmental expenditures.

This creates and supports more than 90 jobs through direct, indirect, and induced impacts. Additionally, more than $14 million dollars in annual output is added to the region’s economy in a typical year.

The second and largest economic benefit garnered from UMD Athletic events is added tourism dollars. The BBER estimated the spending pattern for the nearly 44,000 overnight guests visiting annually as a result of UMD sporting events is $11 million.

“While tourists spend large amounts on food and accommodations, they often spend money on retail and recreation as well; typically doing some shopping and enjoying other recreational opportunities while visiting Duluth,” says Monica Haynes, director of the Bureau of Business and Economic Research.

Berlo adds that Visit Duluth and Amsoil Arena have been instrumental in securing additional hosted athletic contests and tournaments.

The final area of economic impact in the Arrowhead region and Douglas County, Wisconsin is through visiting athletic teams.

This spending also creates and supports a total of four jobs.

The Athletic Department has provided opportunities for student athletes since 1931. During this time, UMD Bulldogs have won eight team national championships and many of its athletes have gone on to successful professional careers.

UMD athletes also have a tradition of strong academics. In 2016-17, they had a combined grade point average of 3.21, which surpassed the school’s highest mark of 3.18, set the previous academic year.

The full report, along with data references, can be accessed on the Bureau of Business and Economic Research website and here.