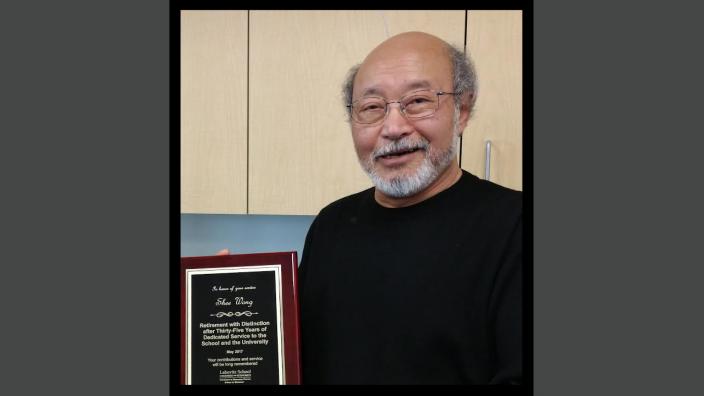 When she retired in January, Candy Furo had been working at UMD for a total of 43 years, 35 of them within LSBE, most recently as an academic advisor.

With a large caseload of students whom she advised, Furo added more to her busy schedule by completing credit checks for seniors, advising the Student Organization Coordinating Council, and volunteering for numerous committees, including UMD’s Commencement and Homecoming Committees.

“With over 40 years of experience working at UMD, Candy sure had a lot of connections across campus,” said Tracey Bolen, director of LSBE’s Academic Advising office.  “If you needed any clarification about campus history or who worked in which department when, Candy was the person to go to for an answer.”

Her passion for advising students and getting to know them was amazing. “Several MBA students were so appreciative of Candy's assistance that they would send flowers to her office quite regularly to thank her,” said Bolen. “We would tease her that she was starting her own flower shop!”

While she excelled at her job, these types of fated occasions endeared her to those at LSBE.  “We all will remember Candy's grilled cheese that set off the fire alarm during finals!” said Geoff Bell, Associate Professor of Management and Strategy.

Retirement plans for Furo include traveling and spending time with her children and grandchildren.

Hired in 1982 as an instructor in the Economics Department, Dr. Shee Wong PhD, who retired in May as Professor of Finance after 35 years with UMD, became a living legend at UMD.  In 2010, Dr. Wong developed the LSBE Financial Planning Program, a wildly successful program that continues today.

Over the years, he developed and then taught many courses, including some at the graduate level and, the most recent, Fundamentals of Financial Management as an online course for the business certificate program.  He also taught special topics and capstone courses, as well. He also was instrumental in bringing virtual trading applications to classes to simulate real-time situations.

Dr. Wong earned the rank of full professor in 1992, FMIS Department Chair in 2004, and the 2005 Faculty Advisor of the Year award based on student input.  Over his UMD career, he advised over 2,000 undergraduate students. Beyond teaching, he was a member of numerous UMD and LSBE committees, reviewed over 10 textbooks, and was published over 40 times in a variety of highly acclaimed professional journals.

“From my many meetings and interactions with Shee over the past 25 years,” said Steve Castleberry, Marketing professor, “one thing I'll never forget is his smile and easy laugh.  It helped lighten things on more than one occasion! He is missed at LSBE!”

As he adores the game of golf, Dr. Wong is spending time on the green in retirement.

One of the people who made coming to work fun for those he worked with retired in April after serving 13 years. Cliff Taylor was lauded by co-workers as fun loving, a comedian, and a social butterfly.

As an LSBE custodian for most of his UMD career, he ensured that the school shone. From shampooing carpets to taking out the trash, big jobs and little, Taylor did them all. Even the windows.

While he excelled at his work, his extrovert personality will be missed most; his notable high jinks being talked about for a long time.

Such as, when he would receive phone calls regarding the Dominator – a carpet cleaner/extractor. “He’d always launch right in to his Arnold Schwarzenegger impersonation in reply,” said Ed Kruse, custodial supervisor for Facilities Management (FM).

His high-spirited fun began each day anew with a workday ritual he contrived. As customary, everyone gathered in FM’s breakroom at the beginning of the day. “He’d come in, open his arms wide, and yell, “Hello everybody!” said Patty Will, also an LSBE custodian. “Everyone yelled ‘Hi Cliff!’” in response.

“He loved working with the people and students in LSBE” said Will.  “He loves to talk and has more stories than anybody I know. He just loves being with people.”

“It was a pleasure having Cliff in LSBE,” said Chris McIntosh, associate professor and Economics Department chair. “He responded quickly to any needs and took the time to get to know people. I miss our late afternoon conversations about work and life.”

“Cliff enjoyed the gift of gab with many in LSBE, said Loren Erickson, Accounting Instructor.  “We miss his banter and clever wit but wish him and Cindy [his wife] a healthy and happy retirement.”

Activities that top the list for Taylor in retirement include fishing and flying drones with friends. Although, when anyone asked what he’d do in retirement, he’d always reply “Whatever the heck I want!”

Eventually, he and Cindy would like to move to Costa Rica.

Trent Nelson joined LSBE as an academic advisor in February. He has been advising students regarding degree requirements, engagement opportunities, and building personal and professional skills. Additionally, he assists faculty with policies/procedures and completes degree requirement checks.

The sense of cohesiveness and emphasis on student development are what drew me to LSBE and UMD,” said Nelson.

A native of Newfolden, Minn., Nelson came to LSBE from the University of Illinois at Urbana-Champaign where he held a similar position. He holds a Master's degree in Educational Leadership from the University of North Dakota and a BA in Geography from Bemidji State University. He and his wife, Shiloh, have a two-year-old daughter, Azalea.

Kevin Stanke began as development assistant in February where he handles front line and back end administration initiatives of the LSBE Development Office, under the lead of Suzanne Anderson, LSBE development officer.

“I enjoy working at UMD because it is a high class institution, like many other universities, but it is set apart by the accessibility of those who wish to attend,” said Stanke. “Many students and graduates I interact with are first generation college students who did not have any kind of legacy to fall back on. LSBE is a forward thinking college that is working towards making strides in the world that benefit not only its students but the community, state, and country as well.”

Prior to joining LSBE, Stanke, who is a native of Northfield, Minn., worked in financial aid at the University of St. Thomas and St. Catherine for almost eight years. He earned a BS in Communications from the University of Wisconsin-River Falls.

Stanke and his wife, Monica Haynes, who is the director of LSBE’s Bureau of Business and Economic Research, have two daughters, Nettie and Josephine.

Additionally, he plays basketball, bicycles, is a musician, and volunteers at KUMD radio, the Duluth Public Library, the United Way, and the Montessori School of Duluth.