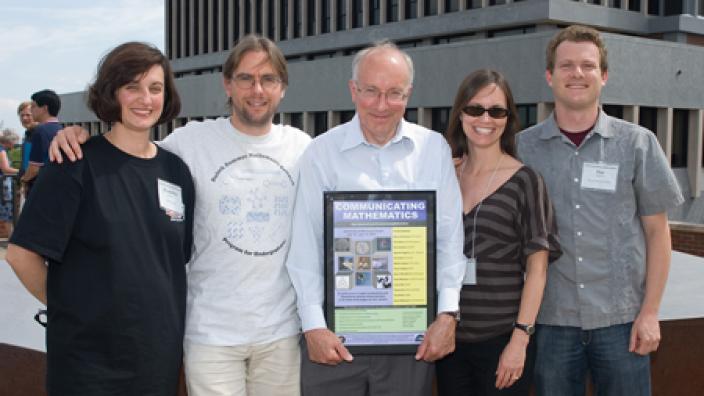 Joseph A. Gallian has been tracking often-used numbers for decades. 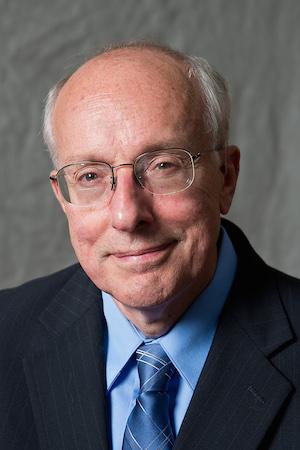 Recently, a reporter from the Wall Street Journal called on Gallian to help explain the FBI tracking numbers adopted in 2015. The FBI tracks more than criminals, it does background checks on government employees, police, military, teachers, coaches, pilots, caregivers and other licensed professionals. That’s a lot of numbers in one data base. 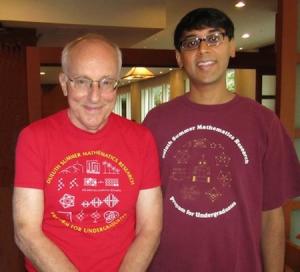 Since 1977, Gallian has run a Research Experience for Undergraduates (REU) in mathematics at UMD with funding from the National Science Foundation and the National Security Agency. Here Professor Gallian and Manjul Bhargava, winner of the 2014 Field Prize in Mathematics, wear their Duluth Research T-shirts. 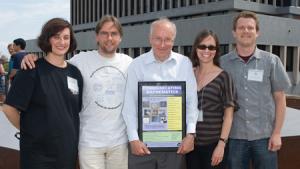 The UMD REU is the oldest and longest running such mathematics program in the country. It has had over 200 undergraduate participants and has produced more than 200 publications in mainstream professional journals. More than 125 Duluth REU students have received a Ph.D. degree. Some of the students, like the ones in this photo, join the program as visitors to help with the program and improve their skills.

UMD’s Joseph A. Gallian on Credit Cards and the New FBI Number Scheme

CREDIT CARDS
Joseph A. Gallian has been tracking often-used numbers for decades. He’s tracked, cracked algorithms, and explained the intricacies of numbers — lots of numbers, such as bank account, passport, driver’s license, airline ticket and even library card numbers.

These days, he gets lots of questions about credit card numbers and his answers are surprising.

“With a check sum formula,” is Gallian’s answer.

Maybe you didn't follow all of Gallian's math, but all you have to know is when the formula behind the numbers is applied, errors are detected instantly. The error could be because of a typo, a transmission glitch, or even a thief trying to fake a valid number.  Credit cards use a more complicated check sum algorithm.

A check sum formula is standard practice in more than credit cards. UMD identification cards have a number with a check digit.  In fact, every card with a magnetic strip or chip uses a check digit. The availability of inexpensive, fast, reliable scanning devices and computers has moved check sums into bar codes, mail tracking, and hundreds of other areas of modern life.

It’s hard to stump Gallian. Give him numbers from the same source and he can often determine the algorithm that arrives at the check sum.

THE FBI
Recently, a reporter from the Wall Street Journal called on Gallian to help explain the FBI tracking numbers adopted in 2015.  The FBI tracks more than criminals, it does background checks on government employees, police, military, teachers, coaches, pilots, caregivers and other licensed professionals. That’s a lot of numbers in one data base.

The FBI predicted it would run out of numbers in the old numbering system in about 10 years so they had to make a change. They added letters to previous the nine-digit system. That made billions of numbers available, instead of the millions they had before.

The FBI also needs to know immediately if a number in question is correct and so we are back to Gallian’s algorithms. “Letters are converted to numbers, and each of the first eight digits of the ID is multiplied by a weight number assigned to its position,” Gallian said.  Multiply, add, divide, and Bingo, the FBI agent’s computer knows the nine-digit number is valid if the last number is correct.

Numbers, numbers, numbers. Gallian can mesmerize his students and he has put UMD on the map with his algorithms and his other amazing mathematical solutions for the everyday (and exotic) math world.

ABOUT JOSEPH A. GALLIAN
Gallian is a professor in the Department of Mathematics and Statistics at the University of Minnesota Duluth. He has received many awards and honors including the Morse Alumni Distinguished University Professor and the Carnegie Foundation for the Advancement of Teaching Minnesota Professor of the Year Award. He is the author or editor of five books and more than 100 articles
http://www.d.umn.edu/~jgallian/vita.html

More about the UMD Math and Statistics Programs for undergraduates and graduate students.

Learn more about UMD's Swenson College of Science and Engineering