The winter light in UMD’s art studio fills the room through the wide stretching windows. Stools are placed around the gray floor and white cabinets line the back wall. At the front of the studio, paintings by senior art student Tony Reamer are stacked against one another.

With faded, dreamy colors, the paintings depict Duluth urban scenes. There are objects from Duluth places attached to the canvas and painted over or simply attached in their raw state. On one painting, a faded comforter is stapled to the canvas. A sock is plastered on another. 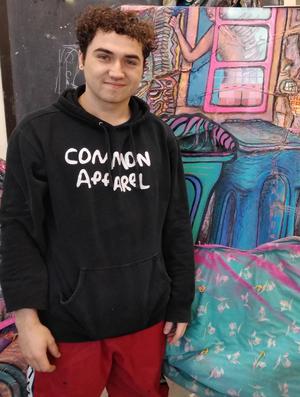 Tony, a senior studio art major from Stillwater, Minn., is exhibiting his work in UMD’s Tweed Museum of Art. His senior show, entitled “Little Dark Age,” will run from Jan. 22 to Jan. 27.

Tony describes his transition from high school to college as weird. “Art started out as a therapy for me," said Tony. "I’ve always been into it but I started doing it seriously after high school when times got tough. Creating art just appealed to me as a job.”

He also came to UMD because of Duluth’s snowboarding and skateboarding culture. “Duluth is one the best places for street snowboarding because its built on hill,” Tony said. “There are handrails everywhere.”

Tony has appreciated art all throughout his life. He remembers his mother taking him to art museums and theatre performances as a kid. “My mom thought that stuff was really important,” Tony said.

The spray painted concrete walls of St. Paul has been another influence on Tony’s aesthetic. “Growing up in St. Paul, I thought graffiti art and street art was the coolest thing ever. I was always inspired by skateboard and snowboard graphics.”

This interest led Tony, an avid skateboarder and snowboarder, to make designs for skate companies such as Common Apparel and The House Boardshop. Several of his designs are on products. He also designed a hoodie for his skater friend who is sponsored by the House Boardshop.

Last summer, Tony went out of his comfort zone and interned at Gartner Studios in St. Paul where he designed paper products such as notebooks, folders, and wrapping paper. “That was a really good way to learn about marketing to an audience I wasn’t a part of,” said Tony. He worked with thirty female designers and saw “how everyone's own aesthetic is different from person to person.”

“UMD gave me the confidence to obtain these internships,” Tony said. “Going to school for art, I know how to either design something a company wants right away or I try new techniques until it fits their needs.”

The inspiration for Tony's Tweed exhibit came from street snowboarding. He and his friends looked for new spots to ride and found many unique places in Duluth.

“Street snowboarding opens up a new way to see the environment in your surroundings,” Tony said. “Once you start looking for spots, you can’t really un-see them. It keeps you actively looking for areas you’ve never been before and forces you to travel.”

Tony would occasionally take an object from a place he discovered. In part, this exhibition's paintings are an effort to discover why he feels a certain way about a location by using found objects, references, and abstractions.

“These paintings focus on animism and intuitive responses to specific places,” Tony said. “It’s important for me to be critical of why I’m feeling what I’m feeling so I act in a way that’s morally right instead of doing what feels good.”

About The Tweed Museum of Art

About the Department of Arts and Design