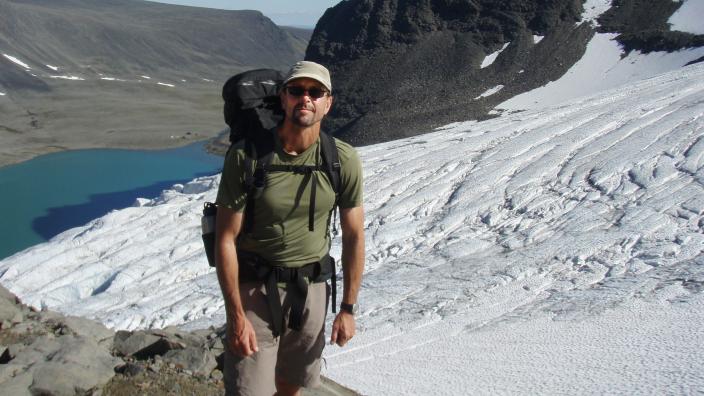 Applying environmental and sustainable practices for a better tomorrow.

A car pulls up to the Duluth airport and Tom Beery steps outside, ready for another adventure. He hops on a flight from Duluth to Minneapolis, then he’s on to Amsterdam, and his last flight takes him to Stockholm, Sweden. From there, he meets a group of students, and they join him on the long train ride to a small village in the Swedish Arctic Circle. The group bounces from the train to a bus and finally, a ferry, and that eventually takes them to Laponia, Sweden.

By this point, Tom has experienced six legs of this trip, yet his journey has just begun. He is leading the students on a 10-day backpacking expedition through three Arctic Circle national parks. They are learning about how the wild landscape connects to the culture of the Sami people—the indigenous peoples from that area. 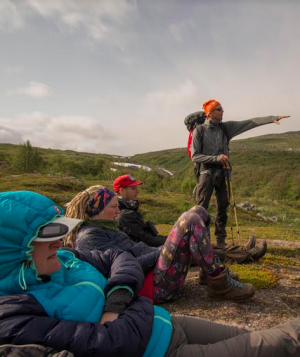 Tom Beery backpacks with students in the Swedish Arctic Circle.

An auto, planes, a train, a bus, and a ferry set the stage for days of travel by foot. “I’m interested in outdoor experiences that give us quality of life,” Tom says. That extends to travel. “I love the challenge of putting different transportations together. Mobility and access are themes in my work.”

Tom has made a life centered around his concern for the environment and his knack for teaching. He received his master’s degree in environmental education in 1994 and his doctor of education degree in education, teaching and learning from UMD in 2011. From there, Tom worked with the Man and Biosphere Health Research Group at Kristianstad University in Sweden as a postdoctoral fellow and later an assistant professor.

He enjoys the classroom and has taught everything from fifth-grade classrooms to undergraduate classes at UMD, and from classes at the Isle Royale Institute to programs at the  Great Lakes Aquarium. He still teaches courses for the Kristianstad University of Sweden, such as the 2017 class described above.

Today, Tom’s job is Coastal Resilience Extension Educator with Minnesota Sea Grant.  He works with communities, businesses and citizens to find the kinds of science they need to be resilient in the face of extreme weather and other coastal hazards.

While in Scandinavia, he learned the Nordic word, “friluftsliv” which directly translates to “open air life.” It also means nature-based recreation, and he draws from that inspiration when he encourages others to explore and appreciate nature in both wild and urban green habitats.

“A strong bond between people and the natural world comes from direct, physical, meaningful and often joyful experiences and leads to heightened understanding,” he says.

“Friluftsliv reminds us that the environment is part of our life,” Tom says. That spirit stays with Tom in his personal life as well as his professional pursuits.

The trip Tom took to the Swedish Arctic Circle embodies his passions: traveling the world, being immersed in nature, and speaking to people about the environment. He channels that through the work he does for Minnesota Sea Grant.

“I work with the social science of climate science,” Tom says. He focuses on the human side of science issues. He talks to people about the environment and works with Sea Grant to engage the community in lectures and workshops.

“I see the Superior Hiking Trail and all our coastal recreation resources as part of the lake,” Tom says. “It’s all connected. Everything in our life, as Duluth residents, connects us to Lake Superior.”