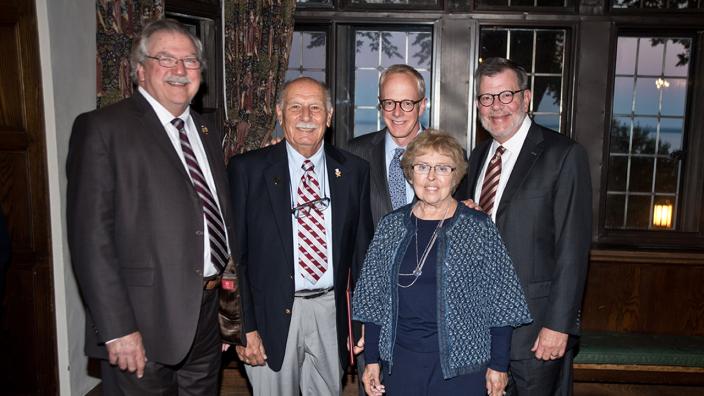 James I. and Susan G. Swenson receive U of M Regents Award.

The event was held at the Kitchi Gamma Club and was hosted by UMD Chancellor Lendley C. Black. Among those in attendance were U of M Regent David McMillan and U of M President Eric Kaler.

In his speech, Chancellor Black stated that, “UMD would be a very different place without Jim and Sue’s generosity. Through gifts totaling $22 million, they have changed the face of the UMD campus.”

The Swensons have also supported student scholarships. Since 1994, Swenson Scholarships have provided full support to a new cohort of students each year and continue to support them through their entire four years at UMD. In addition, Swenson Chemistry Summer Research Grants support students in the Department of Chemistry and Biochemistry. To date, 376 students have benefitted from these two programs.

In his speech, U of M President Eric Kaler noted that the Swensons “have also invested deeply of themselves through their time, leadership, and mentorship of both students and faculty. I have seen for myself the warmth that Swenson Scholars feel for Jim and Sue, and the genuine interest that the Swensons take in all aspects of their lives on campus and after graduation. It’s delightful and touching.”

Regent David McMillan presented the award to Jim and Sue Swenson calling them “outstanding champions of education” adding that they “have transformed the University of Minnesota Duluth campus, elevated its science and engineering programs, and made a lasting impact on the lives of its students.”