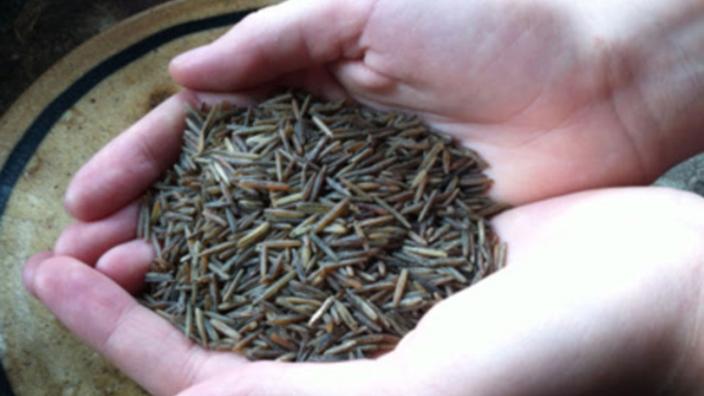 After five years of raising wild rice plants in experimental pools, UMD researchers and colleagues from the Minnesota Pollution Control Agency and the University of Minnesota Twin Cities report that when sulfate concentrations are raised, fewer seedlings survive and mature plants produce fewer seeds that can germinate. These results, which were published in January in the journal Ecological Applications, are timely as the MPCA is currently reevaluating the state standard it set in 1973 for sulfate levels in water where wild rice grows.

“We hope this study assists the state in establishing a sulfate standard that effectively protects wild rice in the waters where it grows in Minnesota,” said John Pastor, a professor of biology at UMD and lead author of the study. Pastor notes that over 1,000 lakes and wetlands supporting stands of wild rice have been identified in Minnesota.

In this study of sulfur biogeochemistry and its influence on wild rice, the researchers found that plant productivity declines at sulfate concentrations over 50 milligrams per liter, a quantity akin to five copper pennies in a bin of 100,000 cents ($1000). They also observed that plants subjected to higher concentrations of sulfate developed black iron sulfide plaques on their roots that might be affecting nutrient uptake.

Sulfur can undergo a chemical flip-flop in the environment. According to Pastor, sulfur is chemically bound to iron, nickel and copper in ore bodies in a sulfide form. When the ore is exposed to air, the sulfide oxidizes, becoming sulfate. Sulfate dissolves in water and can be transported downstream. As sulfate enters wetlands where oxygen levels are typically low, particular bacteria strip off the oxygen and create sulfide again. Only this time, because the sulfide is no longer bound to a metal, it can become biologically harmful. In natural lakes, sulfate and sulfide concentrations are subject to many variables, including groundwater flow and the amount of iron and organic matter in the sediment.

Sulfate enters water from natural sources as well as from humans in the form of such things as farm runoff, sewage treatment discharge, mining and acid rain. Proposals to increase copper-nickel mining in northern Minnesota, and consequently the probability that additional sulfate will enter natural waterways, raises questions about how sulfate and sulfide may affect downstream wild rice beds. In the mid-1940s, Native American tribes and the Minnesota Department of Natural Resources reported that wild rice was rarely found in waters where sulfate concentrations were elevated.

Proposals for new mines have brought extra attention to the Minnesota standard, to which wastewater treatment plants and other industries are also accountable. People anticipate rate increases and higher prices on some products if Minnesota becomes more rigorous about enforcing the current standard or if any new standard that is set. The current state standard is 10 milligrams per liter. In light of sulfide’s behavior in natural waters containing iron, the MPCA is proposing a new flexible standard that will set a separate sulfate limit for each water body containing a wild rice stand. For information about the agency’s draft rule, see www.pca.state.mn.us/water/protecting-wild-rice-waters.

“This is a complicated problem,” said Pastor. “It’s the most complicated problem I’ve worked on and that’s just the way of nature. Sulfide’s interesting relationship with iron is factoring into the proposed state standards as well as into our research questions.”

The Fond du Lac and Grand Portage Bands of Lake Superior Chippewa, Minnesota’s Clean Water Fund and the University of Minnesota Sea Grant College Program funded this research, which is part of a larger study coordinated by the MPCA.

Minnesota Sea Grant, located at the University of Minnesota Duluth, works to enhance the state's coastal environment, society and economy through scientific research and public education programs. Sea Grant conveys the needs of communities, industries and management agencies to university scientists and promotes the best science regarding Lake Superior and Minnesota's inland lakes.