The Art and Science of Sturgeon 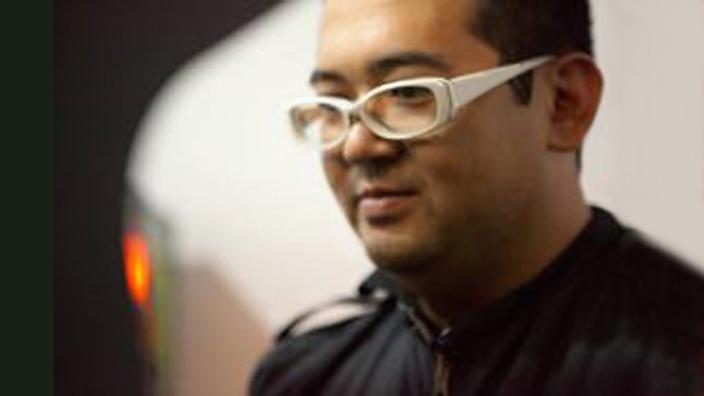 A Japanese professor’s concern about the condition of the ocean’s coral reefs translated into a unique melding of freshwater art and science once he found himself in the Great Lakes. Ryuta Nakajima, associate professor of art and design at UMD, came to the northland via Hawaii and Japan.

“It’s hard not to notice the devastating state of coral reefs everywhere in the world,” Nakajima said. “So I started a coral reef conservation organization in Okinawa two years ago.”  The organization is called the Okinawa Seaside Laboratory (OSL), and it promotes coral conservation and a sustainable economy through art.

Nakajima moved to Duluth in 2005 for his academic position. After starting OSL during one of his annual forays back to Japan, he felt he should also do something here to promote aquatic conservation.

“We hear so much about the conditions of the oceans in terms of plastic pollution, acidification, and so forth. We don’t hear too much about what’s going on with the freshwater environment. So I thought, well, maybe I can do something about that,” he said. Nakajima joined with colleague Darren Houser, assistant professor of art at UMD, who teaches courses on sustainability.

The more Nakajima and Houser studied and talked to local groups such as Minnesota Sea Grant, the U.S. Fish and Wildlife Service in Ashland, Wisconsin, the Iron River National Fish Hatchery and the Fond du Lac Tribe, the more he heard about lake sturgeon, an ancient and long-lived fish species that is currently the focus of many conservation efforts. “Then the Great Lakes Aquarium launched a sturgeon touch tank,” Nakajima said. “I listened to the writing on the wall and chose sturgeon as my focus.”

Nakajima and Houser gathered sturgeon artwork from 43 artists around the country to create an exhibit called “Black Gold,” which debuted in Duluth last year. The goal was to create an exhibit that could be easily shown and transported to other areas of the Great Lakes. Collecting the art in digital format fit the bill. That way, any venue interested in housing the exhibit can print the 36-inch-by-36-inch works themselves. “It’s way more flexible,” Nakajima said.

Another way to increase the project’s outreach was to print a black and white ‘zine from the digital images. Wisconsin Sea Grant’s educator and sturgeon history expert, Kathy Kline, was included in the effort when she wrote a column for the ‘zine.

Their efforts seem to be working. After its debut in Minnesota, a teaser collection of five art pieces was shown in Fond du Lac, Wisconsin, as part of the annual Sturgeon Spectacular, and a full exhibit was held in Detroit at the Belle Isle Aquarium. Beginning April 26, it’s slated to show at UW-Madison at the School of Education Gallery in a cooperative effort between the organizers, the Wisconsin Water Library and the University of Wisconsin-Madison Art Department.

“There’s a lot of interest in Madison in the intersection of art and science,” said Anne Moser, Wisconsin Water Librarian, who has helped find venues the shows in Wisconsin. “The graduate students in the UW-Madison Art Department are interested in melding art and science and want to do more of these kinds of events, so they are helping, too.” (To schedule a show in your Wisconsin community, contact Moser at akmoser@aqua.wisc.edu.)

To increase interest even more, organizers convened panel talks by local sturgeon experts in conjunction with some of the shows. Wisconsin Sea Grant’s Kline and Aquaculture Outreach Specialist Fred Binkowski participated as panelists in the Fond du Lac show. 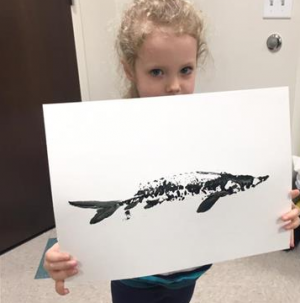 A girl holds up a print she made of a young sturgeon through a process known as Gyotaku. She participated in an event held last February for the Sturgeon Spectacular in Fond du Lac, Wisconsin. (photo: Ryuta Nakajima)

Related activities for children feature the traditional art form of Gyotaku, or “fish impressions,” which dates from the mid-1800s. Nakajima makes silicon molds from young sturgeon that the children can dip in ink. They then lay paper on top of the fish and rub it to create a fish print.

Fish prints were a way to keep ancient anglers honest, Nakajima explained. “Every fisherman brags about how big the fish was that they caught. Japanese fishermen are no different.” Fishermen imprinted the fish on paper to prove that they caught it. In addition, they wrote data on the print such as the date it was caught, location, the weather conditions and the weight of the fish. “Then the fisherman and two other fisherman at the site needed to sign the paper for it be official,” Nakajima said. After photography evolved and the need for Gyotaku lessened, it evolved into more of an art form.

Moser said the fish printing activity is a great way to teach children about sturgeon and that they have a lot of fun doing it.

The exhibit, now called “Living Memory: Portraits of the Lake Sturgeon,” will return in its entirety to the Sturgeon Spectacular in Fond du Lac in January 2019 with more panel discussions and activities for families. More details on the Madison showing are forthcoming.

About UMD's Department of Art and Design