Study Abroad: Go For It! 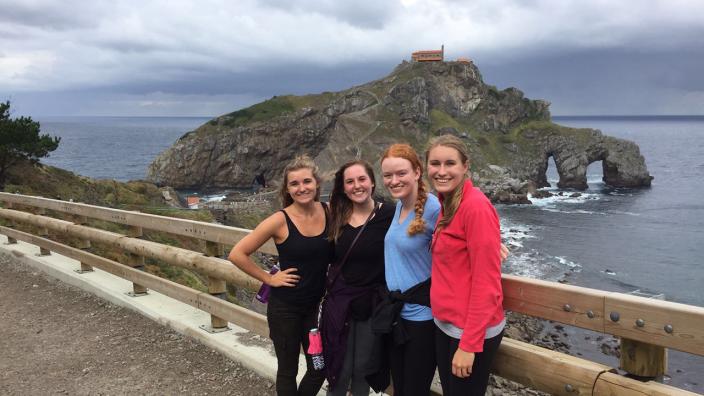 Elle Ickert has studied Spanish since elementary school, so when she decided to study abroad she "jumped on Spain instantly."

Elle Ickert, a junior majoring in organizational management with a minor in Hispanic studies, is using her involvement and experiences in college to figure out what she enjoys and to choose a career from her many interests. She belongs to a number of organizations on the UMD campus, including Greek Life, College Republicans, Pre-Law Club, and Political Science Association.

“I have four different career paths that I’m looking at currently,” Elle says. “I’d really like to work in sports management, go to law school to eventually be a lawyer and then a judge in Minnesota, or a diplomat for the U.S. Embassy in Spain, or go into the business world and eventually become an executive.” Wherever she is in the future, Elle says, “I do plan to use Spanish in my career path.”

During fall 2016, Elle spent a semester abroad in Bilbao, a city in the northern part of Spain. Before her classes started, Elle says, “I went over in June, and I actually lived on the Balearic Islands for the summer with a family. I was an au pair, so like a live-in nanny.” She didn’t know the family before she went. “I just kind of took a leap and went for it,” she remembers.

In high school, Elle was placed in Denmark for six months with Rotary International, but she explains that her study abroad experience in college was different. “This time I knew that I wanted to go somewhere where I could speak Spanish. Coming to college, I knew I could pick where I wanted to go, so I jumped on Spain instantly.”

Elle grew up in Saint Louis Park, Minn., and she was exposed to Spanish from a young age. “I went to a Spanish immersion school, Park Spanish Immersion. I’m fluent in Spanish and have been since the third grade.” She was not so inclined toward the experience while she was in elementary and middle school, but now she says, “Looking back on it, I’m really thankful that my parents put me in that Spanish immersion school. Now traveling and going to Spanish-speaking countries, it allows me to communicate with people. There’s no barrier there.”

During her time in Spain, Elle realized, “I actually love Spanish. I love speaking it, I love knowing the language, I love the feeling of being able to communicate with other people that don’t just know English, but another language.” 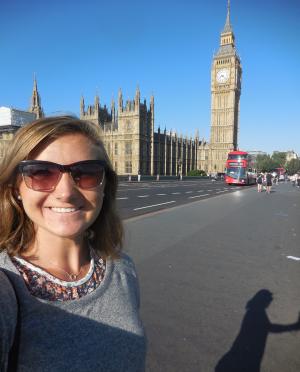 While Elle was abroad, she didn’t do much traveling outside of Spain, except for some short trips to London, Denmark, and the south of France, but she says, “I did a lot of traveling in the north of Spain. I made it to Madrid, Barcelona, and a lot of smaller cities in the north.” She got to see a professional fútbol game, Spanish markets, and the wine country, as well as swim in the Mediterranean Sea during her time as an au pair. “That really was my main focus, to learn and experience Spanish culture,” she explains.

There is one challenge that Elle notices, “Since coming back, I’ve had a hard time getting back on my schedule of doing homework and studying. In the U.S., we are very fast-paced. Punctuality, time-management, organization – those are all things in our culture.” In Spain, she says, “They are very, very laid back over there. It was very like, ‘Oh, you’re ten minutes late, it’s fine. Oh, you only studied the night before, you’ll be fine. You’ll get an A on the test,’ and you would.”

She dreams of traveling again soon. “It’s definitely opened me up to our culture and how we do things, and it’s also opened me up to the European culture and how their cultures overlap.” She continues, “I think I would like to go somewhere that is not part of Western culture now. I would like to go to Japan or China or Indonesia. I’m ready to open myself to other cultures, other than Western culture, and experience that now.”

Elle highly recommends studying abroad. “Sometimes it can seem scary and intimidating, but it’s so worth it. It’s a life-changing experience. You’ll grow so much as an individual and you’ll learn a lot about yourself, but if you are one of those students who might be a little scared or intimidated, start with something short. Start with one of the two-week programs or three-week programs or go for the summer. Don’t feel like you have to jump into a full semester or year abroad, if you don’t think you’re ready.”