Get Out There & Adventure! 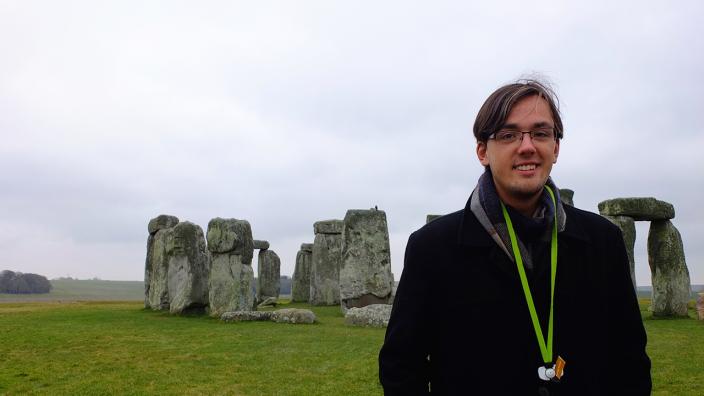 Senior Bryce Remple says, "Traveling definitely changes how you look at things." He studied abroad in England for a year.

UMD is known for having a top-notch study abroad program. Many students take advantage of it at some point in their college careers. These students go on to become motivated learners and travelers who are passionate about the issues facing our globe.

Bryce Remple, a senior majoring in math and physics, studied abroad in Birmingham, England for the 2014-15 school year. He says, “I really enjoyed it. It was a lot of fun, great experience.” He continues, “I liked it so much that I then got a job at the Study Abroad office trying to convince other people to study abroad.”

He knew that he wanted to study abroad even in high school. “I have a brother who is four years older than me. I was following him around on all of his college visits, and every place talks about studying abroad, so I started looking into it then and I knew I wanted to do it.”

Bryce’s family had already helped him become an avid traveler. “We have been to every state other than Alaska, as well as Mexico, Canada, England, Spain, France, Germany, Luxembourg, Lichtenstein, Austria, Switzerland, Italy, Greece, Morocco, China, and Mongolia.” Studying abroad in college was the next step in Bryce’s journey.

Bryce got to travel around Europe while he was studying in England, too. “Traveling in Europe is super cheap,” he says, “so I got to go to a few places. I went to Dublin for the weekend, and I went to Florence, Italy for the weekend. Then my parents came to visit me, and we did a bunch of traveling throughout the U.K. After I was done, I went to Munich, Germany to visit some of the people I’d been living with.”

One challenge that Bryce had before going was figuring out his living situation. He remembers, “Two weeks before I left, the school emailed me and said that they didn’t have a place for me to stay for housing, so then in the last two weeks I had to find a place to live for the year that I was there.” Thankfully, it worked out. “I stayed in a house with a bunch of other students, most of them were international students.” 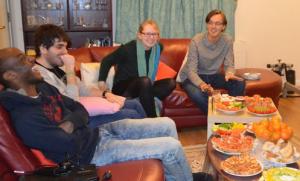 Bryce (right) shares a meal with some of his international housemates.

It was not all easy, though. “It was just kind of funny because we ended up with weird cultural differences and communication issues. Everybody spoke English, but still, sometimes things still don’t quite translate and that’s always funny.”

Bryce shared some American traditions with his housemates. “We did cultural things, like I made Thanksgiving dinner for everybody in my house because they had never had it before, and the German people there would make all these fancy German Christmas cookies.” Overall, Bryce recalls, “I really enjoyed getting to meet a bunch of different people from all over the place.”

Bryce tells a story of one night that he and some of his friends went out, “Me and some of my housemates went for a weekend to northern Wales. We stayed in this hostel and right next door there’s a pub, so one night we went over to the pub and we were just hanging out. One older gentleman must have heard me talking, and he came over and was like ‘I heard you talking over there, are you American?’ And I was like, ‘Oh no, what do I say? Do I want to lie and say I was Canadian?’ but I was like, ‘Yeah, yeah, I’m American.’ He said, ‘I’ve got a bone to pick with you.’ I was like, ‘Oh gosh, what now?’ And then he was like, ‘You Yankees dumped all that tea into the Boston Harbor and you didn’t have the common decency to put some milk in it!’

There were other challenges that accompanied the entertaining moments for Bryce. Before he went, he says, “The most challenging part was planning which courses I was going to take, because I had to get them all reviewed. Apparently, no one from math or physics studies abroad, so none of those courses had been reviewed before, so I had to go through and do all of that myself.”

He also describes the feelings that everyone experiences when making a major life change. “While you’re there, the most challenging thing is dealing with the fact that everything is different. England is not terribly different compared with maybe some other countries that you go to, but it’s just that everything is a bit different, so that kind of wears on you a little.”

Coming back to the United States, Bryce realized, “Traveling definitely changes how you look at things. You get to see how people do things and that reaffirms the fact that the way we do things isn’t the only way or even the best way to do things.”

He goes on, “When you come back, you’re used to that culture, and you come back and you get a really different view of our culture and certain things will bug you about the way we do things after you’ve been there for a year. It’s not something that you expect to feel out of place in your own culture, but you kind of do when you come back.”

Bryce plans to continue his traveling and learning after he graduates. “My current plan is to do grad school in Europe somewhere, maybe England or in Germany, Austria, Switzerland area."

Bryce encourages every student to study abroad. His advice, “Do it. Plan early. Be flexible, go with the flow. Especially in today’s day and age, you can’t get away from the fact that there are other countries in the world and that you need to learn how to work well with everybody.”

Here's more information about the program mentioned above.