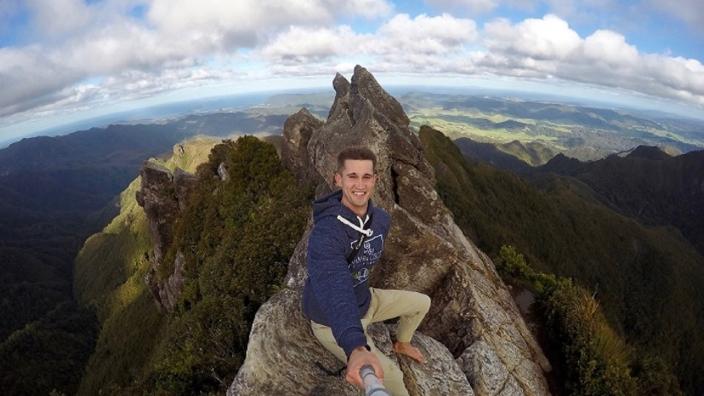 What is your major/minor at UMD?

My major is Marketing/Graphic Design.

When and where did you study abroad?

I studied through the UMD program at Waikato University, New Zealand in the fall of 2016.

What was your most memorable experience abroad?

Hiking to the peak of a mountain with friends twice in twelve hours.

What was the funniest thing that happened to you abroad?

I went to a Subway restaurant and asked for American cheese on my sandwich, and the lady just gave me a blank stare. I said, "Oh right, you probably don’t call it that here!"

What did you do for fun in your free time?

Every weekend my friends and I would drive to a new place on the North Island to explore. Many places involved mountain hikes or surfing on beaches nearby.

Did you travel to other cities or countries while abroad? If yes, where else did you go?

I went to all of the main cities in New Zealand. On the North Island, I lived in Hamilton and visited Auckland, Tauranga, Rotorua, Coromandel, Tuateawa, Raglan, Thames, Taupo, and Tongariro National Park. On the South Island I visited Christchurch, Timaru, Dunedin,  Otago, Queenstown, Wanaka, Milford Sound, and Mount Cook National Park. In addition to my New Zealand travels, I visited Fiji for ten days and stayed on five islands there.

Did you create a budget? If so, were you able to stay within your budget?

I created a budget before I left, and I followed it to a T. I'm very glad that I did this, and I recommend it to all students who study abroad.

Do you have tips or advice regarding budgeting and spending?

My only tip is that you create a weekly/monthly budget and stick to it. That being said, don't be afraid to spend a little extra money on things that you want to do. After all, this is a once in a lifetime experience, and you have the rest of your life to work and make more money.

What was traveling like? (Both within the city and outside of it)

It's all I could think about during the school week! New Zealand has such a diverse landscape that every city is something entirely new. When traveling you will see endless sheep, cows, and rolling hills one way and palm trees and endless waterfalls in another direction. On the South Island there are massive mountains to pass, and they are directly off the ocean which makes for a lot of narrow roads and cliffs. It is a bit intimidating traveling by car in New Zealand because of how narrow the roads are and the fact that they drive on the opposite side of the road, but I recommend that you see the entire country while you're there!

What did you pack but ended up not needing?

Nothing. Pack for all climates and activities when going to NZ; I promise you won't be over equipped. Some essentials include a raincoat, nice sweatshirt, hiking boots, shorts, pants, and of course a camera.

What did you need but didn’t pack?

I went snowboarding a few times without having a winter jacket but it wasn't a huge deal because I had sweatshirts and a raincoat.

What was the food like? Did you find food that you enjoyed?

The food was very similar to what we eat in the US. One thing that they have a lot of are fish and chip shops. This quickly became my favorite meal to eat when traveling, especially in beach locations.

What foods did you miss from home?

Mexican food. Oddly enough, I never saw a Mexican restaurant, and it is one of my favorite types of food. Also, they had a very crappy version of ramen noodles. I never thought I'd say that I missed eating ramen noodles, but I did while in NZ.

How did the locals dress?

The fashion seemed to be like what was popular in the U.S. about ten years ago - a lot of baggy clothes and mismatching outfits. The music in the clubs followed this trend as well.

How did you get the foreign currency?

I found that it was cheapest to take cash out of the ATM. It had a lower exchange rate than what my bank charged to use my credit card. Just don't carry a lot of cash on you, for obvious reasons!

What did you miss from home that you never thought or realized you’d miss?

I missed the convenience of how late our stores stay open in the U.S. Most stores in NZ close by 6 pm, including convenience stores which made it hard to find a late night snack.

What was one thing you thought might be a big deal while being away, that wasn’t so much of a big deal when you were actually living there?

I wasn't concerned about much for this trip but, I was curious to see how fast I would make friends. I was overwhelmingly surprised with the amount of people I met the first night I arrived! I went to dinner with people from six continents and twelve countries who are all now going to be lifelong friends.

What advice would you give other students on how to adjust to living in a new culture?

Go out of your comfort zone to experience as much as you can! Stay open minded and don't be afraid to ask for help.

Would you recommend studying abroad to another student? If so, why?

Absolutely! There are so many benefits to living in a different culture, not to mention, you can make friends from all around the world. I've already stayed with two friends in Europe for free since I've been back from New Zealand. It's a great perk to have free housing across the world and a great way to see new places with a local tour guide.

Do you hope to travel again in the future, and if so, where?

Yes! I've already been to the Netherlands and Belgium since returning from NZ, and I'm going to New York, London, and Paris this summer. It's safe to say I'm hooked on travel.