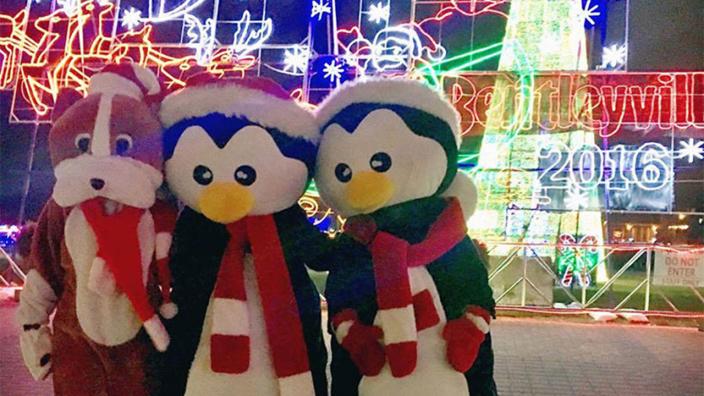 Millions of lights illuminate the park around Miranda Demo, but she can’t even see her feet. She’s in a giant reindeer costume, being guided through the light tunnels of Bentleyville by one of her fellow Gamma Sigma Sigma sorority sisters. Bentleyville is the largest free tour of lights in the U.S, and it's in downtown Duluth. It's run completely by volunteers, and many of them are UMD students, like those pictured above: Gamma Sigma Sigma's Kristie Slindee (bulldog), Molly McKeen, and Sarah Gustafson (penguins).

As Miranda struggles to see ahead of her; she feels a tight grasp on her leg. Through the eyepiece screen, she makes out a small child hugging her and smiling from ear to ear. Hugs like this are what makes volunteering worth it for Miranda. “The looks on the kids’ faces are just priceless,” says Miranda. “There’s nothing else like it.”

Miranda volunteers and coordinates volunteers. She is the programming chair for 350 UMD Greek Life students and is responsible for reaching out to the community to provide UMD volunteers for all kinds of events throughout the year. “Volunteering is very important to us," she says. "It's great that we have such a large number of people who can help.”

In the Tweed Museum of Art, eight children sit at a table and two stand behind the chairs and watch. 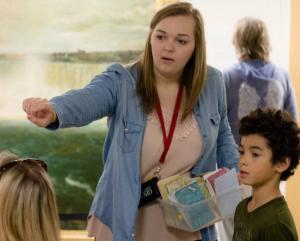 Elementary education major Cassie Bolen directs students to the table where the Renaissance books are being made.

The children cut paper into long strips and then decorate them by using glitter and sequins, gold pens and ribbons. They are making Renaissance-style crowns, following the patterns that the kings and queens of England wore during the late 16th Century.

Why? To celebrate 400 years of Shakespeare and the Tweed’s exhibition of an actual First Folio, a collection of 30 of Shakespeare’s most famous plays.

In October, UMD’s education majors, art education majors, faculty, staff, and others helped to teach families about Shakespeare by demonstrating calligraphy, and making crowns, masks, and Renaissance-style books. Cassie Bolen, an elementary education student who is taking art education classes, says the excitement of the children was infectious. "Their families were thrilled about seeing an original Shakespeare folio and the kids picked up on it," she says. "The creativity was stunning."

The day was active and fun. Children were guided through a variety of activity stations planned by the art education department. Over 460 visitors saw exhibits of costumes and theater artifacts. Best of all, they came face to face with the original 1623 book, opened to the page that contains one of the most quoted lines in the world, “to be or not to be” from Hamlet.

In front of a young girl lies Playdough, batteries, LED lights, and a battery pack. She is making electricity with the help of a member of UMD's Society of Women Engineers (SWE). She places four batteries into the pack. She rolls the salt-based dough into two balls and then connects each to a wire from the battery pack. Almost immediately after placing a LED light bulb into the dough, it lights up. The girl smiles with excitement. She’s created electricity with her own two hands. 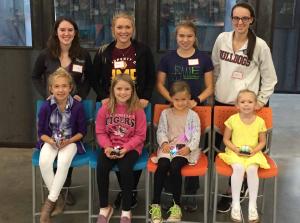 Mommy, Me, and SWE event organizers, (l-r) Claire Anderson, MiKalya Miller, Tayler Hebner, and Stephanie Harle with some of the girls who participated in the event: Stella, Reagan, Doris, and Bella.

The experiment may be simple, but it makes SWE member Claire Anderson happy she volunteered her time for SWE’s event, Mommy, Me, and SWE. The event was held in November inside the Swenson Civil Engineering Building massive laboratory. “We really just want girls to know what they’re capable of,” says Claire.

While SWE members assisted nearly 30 girls in grades 1-3 with hands-on activities, their moms and guardians learned more about how to inspire their daughters’ interests in STEM (science, technology, engineering, and mathematics).

“There are so few women in the engineering fields,” says Claire. For instance, women make up only 16 percent of chemical engineers and 12 percent of civil engineers. "SWE hopes our Mommy, Me, and SWE event eventually encourages girls to pursue a field in the sciences."

Society of Women Engineers at UMD