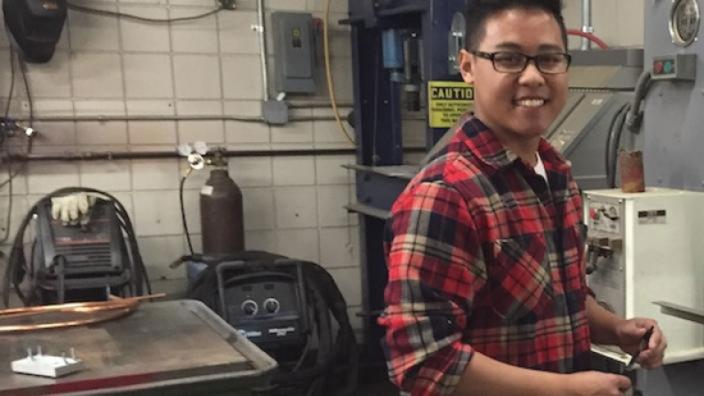 It literally looms. One of NRRI's scientists is studying rip tides. NRRI's Steve Johnson and Richie took on the task of mounting a camera on a 70-foot high tower. "We had to do the calculations and brace the tower so it could withstand the wind off Lake Superior," Richie said.

When Richie Vang scored a job at UMD's Natural Resources Research Institute (NRRI), he knew it would be interesting, but he never dreamed it would be quite the adventure it turned out to be.

"Just weeks after I arrived at UMD, I was riding a snowmobile in the Superior National Forest tracking the location of pine martens. I couldn't believe it." Armed with telemetry devices, Richie and another student followed radio signals to find collared pine martens and identify their habitat. During that first year as an undergraduate research assistant, Richie worked with Ron Moen, UMD wildlife biology professor and NRRI scientist, to study and sometimes track the small furry animals called pine martens, as well as wolves, deer, and other wildlife. "It was great. I was doing things I had only seen on the National Geographic channel," he said.

Richie, who is a chemical engineering major, has many interests. "I've always been into cars. I'm hands on," he said. "In high school I spent tons of time working on my car in the garage at home." He made no secret about this ability to work with machines and that led him to another job at NRRI.

Steve Johnson, principal laboratory machinist, lured Richie into NRRI machinery operations. Richie has one word to describe the projects he has worked on as an intern in the machine shop, "Cool."

Robots, Anyone?
Remember the pine marten tracking? Well, other researchers around the country are tracking the movement of moose. They use a special collar to track the way a moose moves its head. They can tell if the moose is reaching up to eat tree leaves or down to eat from the forest floor. But something wasn't working right for NRRI and other researches as far away as Alaska, so Steve and Richie got an assignment: test the collar. First they had to build a robotic (moving mechanical) moose's head. They made a device that twisted, turned, bent, and straightened just like a real moose. Steve and Richie were able to attach the collar to their machine and identify the glitch. Richie's response? "Cool!"

Richie can explain many more projects in detail, such as developing a streamlined process for chopstick manufacturing and constructing a gentle trap for gathering tiny bits of weasel fur, but one project looms as his favorite. It literally looms. One of NRRI's scientists is studying rip tides. Steve and Richie took on the task of mounting a camera on a 76-foot high tower. "We had to do the calculations and bracing so the camera mounting could withstand the wind off Lake Superior," he said.

NRRI also put Richie's chemical engineering interest to work. NRRI uses gallons of a hardening binder to coat products in the rapid prototype center. The binder costs $800 a gallon. Richie's assignment is to help identify the ingredients and develop a recipe using inexpensive chemical materials. "It looks like we will be able to do it, and it will save lots of money," Richie said.

Now in his junior year, Richie has found himself sought after again. He applied to leading industrial companies for a 2016 summer internship and received four job offers. “They were all really interested in my machine shop projects. I was blown away by the offers!”

Lining Up an Internship
But Richie needed an internship, and that led to an offer he couldn't refuse. "At NRRI Steve always accepted my ideas and challenged me to think things through and find ways to be more efficient,” Richie said. So, acceptance and challenge were on Richie's "must have" list for the internship. He found them.

In the summer of 2016, Richie will be a manufacturing engineer intern at Graco in Minneapolis. It's a leading manufacturer of pumps and spray equipment. Richie explained why, even though he is a chemical engineering student, he took a internship with a heavy focus in mechanical engineering.

"Graco needs people that know both fields," he said. In one of their projects, Graco sprays a fire retardant chemical material onto skyscraper beams before construction. "It helps to have a wider background," Richie said. "They liked that I could offer both mechanical and chemical engineering perspectives,” Richie said.

Richie's "hands on" drive and multi-faceted interests will serve him well, in the internship ahead and in his career.

Swenson College of Science and Engine