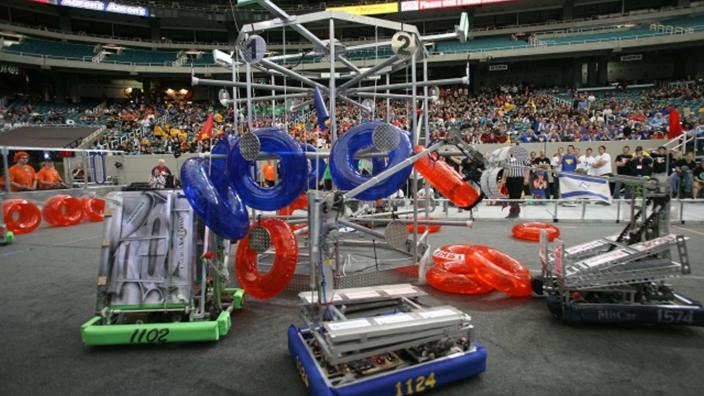 For some, going to college means leaving their high school legacy in the dust. For others, like senior Alex Bergal, a business major at the Labovitz School of Business and Economics, it provides an opportunity to change a legacy into something greater. Bergal mentors the Duluth East ‘Daredevils,’ a team of high school students that participates in the FIRST Robotics Competition, a head-to-head competition that combines science, technology, engineering and math. Bergal was on the team in high school, and now that he's in college he's still working with it.

Teams around the world have six weeks to complete a challenge. In 2013, teams built robots that tossed flying discs into goals and then climbed a 90-inch pyramid. In 2014, they built robots that moved 24 inch game balls down a field and into high and low goals to score. This year, the game was called Recycle Rush. “Teams designed robots to move and stack recycling totes,” Bergal explained. “It was a challenge because the totes are complicated to move. The angles made them hard to pick up and they could flip over.”

Planning around such tricky objectives is Bergal’s job. “I’m a strategy mentor for the team, so I help the students come up with plans for how the robot will do what we want it to do,” he said. “While the build team creates an ‘athlete’, the strategy team designs the ‘playbook’ that will guide the action.”

From Student to Mentor

Bergal has participated with the Daredevils for six of their eight years, two as a student and four as a college student mentor. “It’s a huge task,” he said. “The East Daredevils have about 38 students and 14 mentors every year.” They do more than build and program the robot. They fundraise, take photos, and complete many other tasks.

In all of his years on the team, this year’s program had the most success. “We earned the Chairman’s Award, a prestigious prize for teams that best spread awareness of STEM in their community,” Bergal said. “It was an honor. Because it came with an invitation to the FIRST Worlds tournament, it let us compete against the best of the best.” And that is exactly what they did. In early April, they traveled to St. Louis, Mo., to compete against 600 of the top teams from around the world.

Their performance started out shakily, but the Daredevils eventually hit their stride and performed well. “During one match, we earned a world-high score. We had some very close, very high-scoring matches against some very talented teams,” Bergal said. “Next thing we knew, we were division champions.” The Daredevils found themselves in second place. “It was an amazing experience,” Bergal said. “Before Worlds, we felt as though some of these teams were on a different level than us; suddenly, we were there, competing and winning.”

When they aren’t competing, the Daredevils are active in the Duluth community. “We’re a part of many local parades and festivals.” They also complete ‘off-season’ build projects unrelated to FIRST. “They keep us busy and give us something to show off when we go to events. This year, we’re upgrading a t-shirt cannon robot we made in the past. We’re going to make it bigger, better, and stronger.”

Labovitz School of Business and Economics