Student is Making His Mark 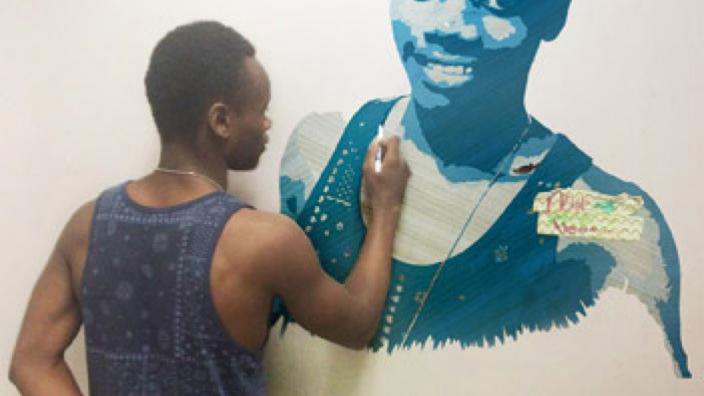 One UMD student, many interests.

ART AND PERFORMANCE
Delphin is known on campus for his speed painting performances. At an event in spring 2015, the Kirby Ballroom students hushed as music played and Delphin painted. In under two minutes Delphin went from lots of color on a canvas to a portrait. “To me, art is not just color, it's storytelling. I want my paintings to be meaningful to the audience.” This passion for art has taken Delphin far. He performs in venues on and off campus. He has a minor in graphic design, and has even established his own graphic design company, Delstarr.

SCIENCE: THEORY TO REALITY
Right now, Delphin is a computer science major, but he has a heavy inclination toward engineering. "Coding and analyzing data are interesting, but I want to get my hands dirty and actually build technology," he said. Delphin has ideas. He wants to make everyday life easier for the world. "I see mirrors and glass tabletops in homes that deliver information," he said. "They could use face recognition to identify to the correct person and deliver email, news, and other messages."

ENDLESS POSSIBILITIES
Change is not strange to Delphin. In 2010, his family: nine children, his father and his mother, won an immigration lottery to come to America from Burundi, East Africa. The U.S. Immigration Lottery annually makes visas available to individuals who are from countries with low rates of immigration.A whole new life awaited them.

In high school, Delphin leaned on art to help express what his limited English could not. It was his high school art teacher who noticed his talent and pushed him to enter a national art competition. Although he didn't receive first place, the painting he entered was so remarkable that it was chosen for a billboard that advertised the award. The billboard went up in cities around the country.

FAMILY ROLE MODEL AND UMD LEADER
Delphin is the second oldest child in his family, and he is conscious that his brothers and sisters look up to him. He strives to pave the road to success for his younger siblings. “Even when we face tough barriers, I want to show them that they can make it.” He has a sister and a brother who also attend UMD.

Delphin is a representative at large in UMD's Student Association. He works on events and projects that highlight diversity. "Specifically, my goal is to assure that UMD's multicultural voices are not silenced."