LLO director receives John Martin Award from the Association for the Sciences of Limnology and Oceanography. 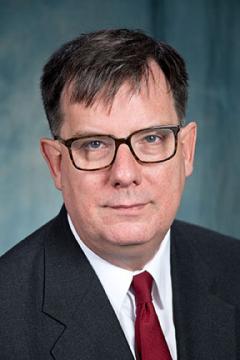 Robert Sterner, director of UMD's Large Lakes Observatory (LLO) has been honored for a paper he wrote years ago, that has had a major impact on researchers since the paper was published. Sterner is the recipient of the John Martin Award from the Association for the Sciences of Limnology and Oceanography (ASLO), the world’s leading professional organization for researchers and educators in aquatic science.

The award recognizes papers that are at least 10 years old that have led to fundamental shifts in research of their given field. Sterner is receiving the honor for a 1994 paper on herbivore nutrition, a collaborative effort with fellow researcher Dag Hessen.

Sterner said, “My paper with Dag helped scientists understand how organisms fit into nutrient cycles because we can think of any living organism as a complex molecule composed of elements.” He added, “This way of thinking helped unite different schools of thought. It has practical meaning because food webs participate actively in the cycling of the limiting nutrients that can cause excess algal growth."

In addition to working as the director of LLO since July of 2014, Sterner is also a Biology professor with UMD. He was nominated for the ASLO award by a colleague that recently passed away, which makes this honor particularly poignant. "It is an immense honor to be recognized by your peers and this award reminds us that science is a global enterprise,” said Sterner. “My coauthor is Norwegian and persons who nominated us came from Europe and Asia as well as North America."

LLO is a research institution affiliated with the UMD. The agency’s mission is to perform scientific studies on the large lakes of Earth. In addition to conducting research on the Great Lakes with the research vessel the Blue Heron, LLO studies the impacts of human activity on many of the world’s large lakes to help guide efforts to sustain and preserve these important bodies of water. Visit the LLO website for more information.