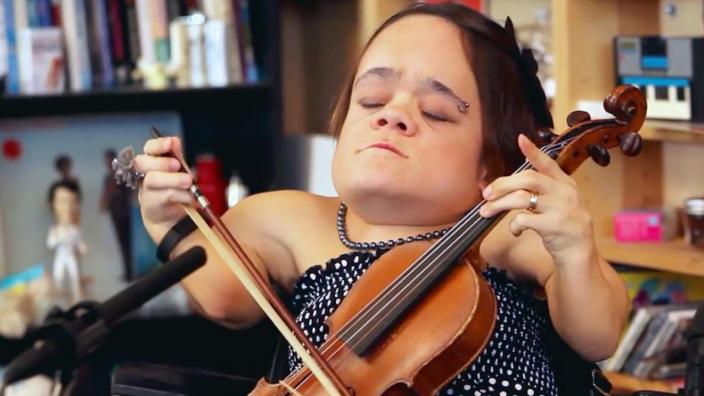 She's in the middle of an incredible journey and on the way, UMD alumna, Gaelynn Lea, won NPR's Tiny Desk Concert. Now the sky's wide open and she's on her way to even more adventures.

In 2010, Gaelynn Lea was performing with musician Charlie Parr at the UMD Farmer's Market, surrounded by fresh veggies and baked goods.

It was just an ordinary sunny day, but as luck would have it, Gaelynn happened to catch the ear of a rockstar.

Although Gaelynn didn't know it then, Alan Sparhawk, from the nationally-acclaimed band Low, had been listening. "Two weeks later he texted me and asked if I would work on a project with him." Gaelynn agreed to the collaboration. 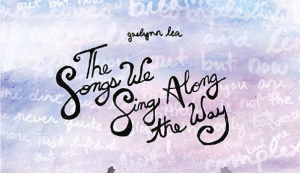 Gaelynn's newest EP, "The Songs We Sing Along the Way"

The project, which turned out to be a success, involved a more ambient sound than Gaelynn had played in the past. A special synchronicitydeveloped between the two. Alan and Gaelynn found they enjoyed playing together so much, they formed The Murder of Crows and released Imperfecta EP.

As her performance schedule ramped up, Gaelynn's music blossomed. It's rich with hints of classical music, Irish fiddle, and American folk tunes. She adds original lyrics, a looping pedal, and haunting solos for an inimitable sound. Alan and Gaelynn continue to perform together and he joined Gaelynn in Washington, D.C. for two of the four songs recorded at the Tiny Desk concert.

UMD MOTIVATION
Gaelynn, who graduated from UMD in 2008, studied political science and psychology, and she made waves. Gaelynn was born with brittle bone disease, a congenital disability, and she put her zeal for helping others into public speaking and advocating for disability rights.

While was co-coordinator of Access For All, a disability rights student group, they led a movement toward the creation of a deaf studies minor. The group's petition received more than 1,400 signatures and hundreds of people came out for a public forum. "I actually drafted the proposal for the minor myself," she says. The proposal was approved by the Board of Regents the following semester. "The deaf studies minor has been alive and well ever since," she says.

Gaelynn thanks the teachers who challenged and supported her. "There are so many people at UMD who had an effect on me," she says. "My favorite teachers, Steven Chilton, Beth Bartlett, and Milan Kovocovich all influenced me. And Nancy Diener... I can't forget Nancy."

Gaelynn now performs, teaches music and continues in her role as an activist for disability rights.

FORGING AHEAD
"It's going to be a fun couple of months," Gaelynn says. She's off to a four concert, mini-tour with NPR and gigs of her own across the Midwest. Check the calendar on her website to see her ambitious schedule.

Her work and her music have had a positive impact on UMD and Duluth, but Gaelynn won't take all the credit. "I'm indescribably thankful for the beautiful people in my life and for the path that brought me here," she says.

This story was printed in the Summer 2016, CLA Clarion magazine.