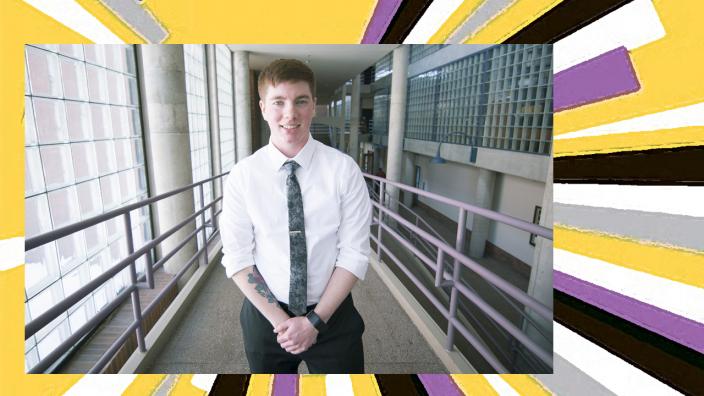 When Sebastian Nemec signed up for a class called Foundations of Cultural Entrepreneurship, he knew he had to come up with a business idea before the class started. It had to be new and original.

One cloudy summer day, he visited Canal Park with a friend and stopped for a bite to eat at Endion Station. They talked about Duluth Pack and Trail Fitters in Canal Park and other nearby outdoor outfitters, Frost River and Duluth Trading Co.

Those stores were familiar to Sebastian because he grew up in Duluth.

He enjoys being outdoors; he loves to hike and camp. But as he and his friend talked about the Duluth stores that catered to outdoor enthusiasts, he realized those stores weren’t for the trans community. Clothing sizes didn’t use accurate measurements and the size labeling was inconsistent.

That’s when the idea came to him. He could create an e-commerce retail store for transgender people.

Sebastian, a cultural entrepreneurship major with a minor in journalism, spent all fall in his class researching and working on the concept. "I knew I wanted to have a business that helped trans+ people," said Sebastian. "Because of my own shopping experiences and what I heard from others, I decided to go for a retail business." He named the company Folx. He also attended a one-week Acara Impact Venture Launchpad class in Minneapolis. The University of Minnesota Institute on the Environment (ION) sponsored the class and also sponsored the Acara Challenge, an annual competition for student ventures that address social and environmental grand challenges.

Helping trans shoppers find the right fit is an essential part of his concept. “Stores are stocked with clothes designed for cisgender bodies,” Sebastian says. He wants to help people with a wide range of body types, and he hopes to offer multiple options for gender expression, especially trans specific products. For instance, finding the right chest binder can be difficult. “There are several options out there,” he says. “Some are safer than others.”

The road between the Canal Park “aha moment” and a full business plan was long. One study gave Sebastian more ideas. The 2015 U.S. Transgender Survey found that 31% of transgender people have been denied equal treatment, verbally harassed and/or physically attacked in a retail store, theater, restaurant, or hotel when the staff or employees either knew or perceived the person was transgender.

The statistics point to a real need for a supportive shopping environment, and Sebastian's plan addresses that need. The site will start with apparel and Sebastian hopes for it to grow into an “everything store” for trans+ people. His business will be equal parts e-commerce and community hub. “A welcoming site can help increase a customer’s self-confidence and ultimately help them live their best lives,” he said. It will also have a blog where the community can submit posts for publication.

Sebastian’s hard work on his Folx business plan paid off. In March 2017, he won the Acara Challenge Gold Award in the domestic division, which came with up to $5,000 in fellowship funds over a year's time. In addition to the Gold award, Sebastian won a second honor, the Audience Choice award in the domestic division competition, which came with $500. "I was excited to be chosen not only for the Gold award, but also the audience choice," said Sebastian. "It didn't hit me until later that night when a friend of mine brought it up, but that day people invested in trans+ lives. That is huge."

More competitions will position Folx for success. Sebastian has entered the UMD Labovitz School of Business and Economics Shark Tank Entrepreneurship Competition. He’s also throwing his hat in the ring for the Carlson School of Management MN Cup, which provides winning entrepreneurs with assistance and up to $450,000 in seed money. "The path ahead is going to have ups and downs just like any other startup," said Sebastian. "But over the summer and after I graduate in December, I'll be working full-time on this and I can't wait to see the business reach its potential."

In a world full of countless opportunities, Sebastian has found a business plan that fills a real need, and that’s how successful entrepreneurs always start.