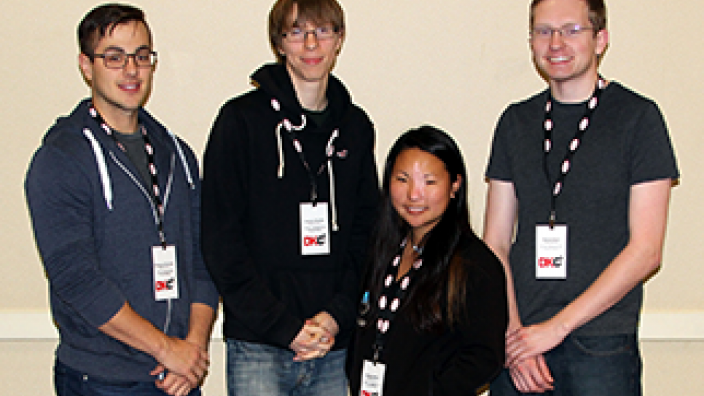 The top prize was earned at the DigiKey Collegiate Computing Competition.

For the second year in a row, UMD students have taken the top prize at the DigiKey Collegiate Computing Competition. Thirty-four teams from 15 universities in Minnesota, North Dakota, South Dakota, and Wisconsin competed for the honor.

UMD's winning team, the Wylie Werevoles, was made up of Jonathan Beaulieu, Amanda Poston, Mitchell Rysavy and Aleksandar Straumann. For earning first place, each student took home a $300 Amazon gift card as well as $5,000 and a bronze traveling trophy for the Swenson College of Science & Engineering (SCSE) Computer Science Department.

The contest took place in Bloomington, Minn., in late October. Four person teams are given short and long programming problems as well as word problems to solve. Competitors need to be at the junior or senior level and majoring in Computer Science or Information Systems.

Rysavy is a senior from Kasson, Minn. This was his first competition, and he said the team spent a few nights a week during the month leading up to the competition to practice as a team. “This kind of event shows me just how much I owe to UMD,” said Rysavy. “The problems we were able to solve wouldn’t have been possible without the education I’ve gotten here.”

Team member Poston agrees. She said, “It was great to be able to use things we learned in class, and it was interesting to see how much we could accomplish working together as a team rather than as individuals.”

Both winners would recommend participating in DigiKey to other students to sharpen their skills. Another UMD group did well at the competition, but didn’t place. Team Coding Pho was made up of Eric Christensen, Mazin Jindeel, and Scott Wolff.

The groups’ advisor Professor Pete Willemsen is very proud of both teams’ efforts. “The students had a good time with the competition experience and deserve recognition,” said Willemsen.

In 2015, UMD’s Swenson College of Science & Engineering enrolled more than 3,300 students. The College is home to ten academic departments, in addition to the Large Lakes Observatory, the UMD Air Force ROTC program, and the Iron Range Engineering program, and connects students with hands-on research opportunities through its collaboration with multiple research institutions and area businesses.