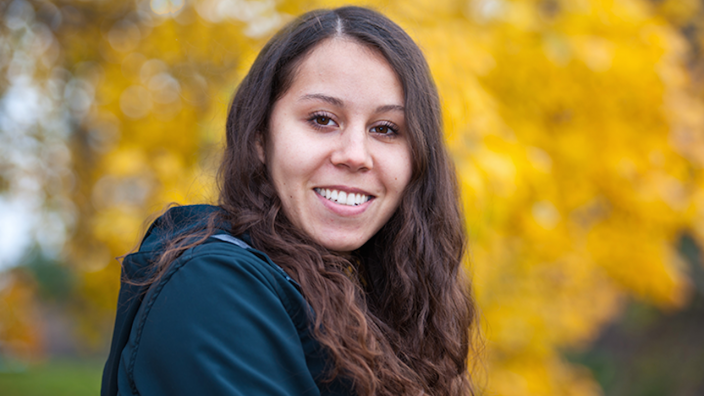 Stuck between two cultural identities, Sara Posluszny learned that finding one’s true self is the key.

Her journey has taken her all over the world, where she met and conquered many challenges. Throughout this journey, Sara’s puzzle came together as she collected pieces of herself with every new experience.

It all started with her first trip to Central America.

In grade school, Sara and her dad packed their bags and boarded a plane to Honduras to connect with her mother’s family. Spending most of her life in Willow River, Minn., a small rural town, she was only familiar with what she describes as a "predominantly white, English-speaking culture." Sitting in the home of her Honduran family, Sara watched in awe as her family conversed in Spanish. She found it hard to communicate with them due to the language barrier and that was a culture shock for young Sara. “I never realized how many basic things in life I took for granted,” she said. Although Sara was introduced to her Honduran family, there was still one person she had longed to see... her mother.

After years of waiting, Sara finally found herself standing right in front of her birth mother. “It was life changing,” she said. “Meeting her made me feel really connected to my Hispanic roots.”

Afterwards, Sara wanted to further explore her culture. At UMD, she joined the Latino/Chicana Student Association and now proudly sits on the executive board. Still, Sara felt the need for more.

In her junior year, she grabbed her passport and set off for a study abroad adventure in Spain. In Barcelona, she learned Spanish, which helped her feel closer to her heritage. However, she did not want to settle for just one country. Sara wanted more European adventures on her own. “I’ve only had myself to rely on, so I challenged myself to see how far I could go,” she said. She daringly boarded a train to Rome and swung by other European cities along the way. After her study abroad trip, Sara found herself exploring more than countries.

Back at UMD, one of Sara’s professors recognized her interest in health and recommended an internship that also helped her grow. Sara signed up to become a Peer Health Coach for UMD’s Health Education Resource Office. She spent her hours working towards women’s health, personal growth, and giving nutrition tips. "In order to help others, you have to learn how to help yourself first,” she said. This experience made Sara more confident in minoring in public health education and promotion. Sara had so many experiences, but she still hadn’t decided on a career path or a major.

Beginning in her freshman year, Sara’s was on the hunt for a major. After searching, she stumbled upon anthropology. The idea of spending her college career learning about other cultures excited her. Walking into her first anthropology class, Sara immediately found a strong connection with her peers. She said, "They welcomed me with warm smiles."

Part of UMD’s anthropology department focuses on Latin America. This helped Sara feel a sense of home in her major. Through her anthropology studies, Sara is learning an immense amount about the world and herself. “When I think about where I was five years ago, and where I am now, I can only see myself going further and further."