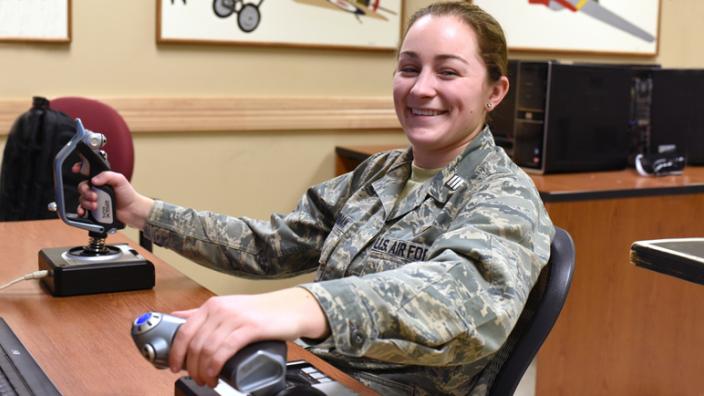 Samantha had a long list of colleges to choose from. She visited three others before visiting Duluth and right away she knew UMD was the one for her. "Something just grabbed me," she said. "I liked the school and all the activities you could do around the Duluth area." While visiting for registration, Samantha decided to find out more information about UMD's Air Force ROTC (AFROTC) program. That was all it took, and her decisions became a reality.

EFFICIENT AND EFFECTIVE
Samantha's "can-do" spirit hasn't let up. She works three jobs. She helps grade papers for a soil mechanics class, has an internship in project management for the Minnesota Department of Transportation, and instructs CPR classes.

She stays focused on her two main interests, the Air Force, where she takes an AFROTC class every semester, and the Civil Engineering program, where she takes a 12-credit course load. She's also received a couple of prestigious scholarships and her achievements have been noticed.

Right now, Samantha’s pretty proud of her grades. Last semester she had the best grade point average of her entire five years at UMD, nearly a 4.0. She’s also on the Dean’s List. “When the material is fascinating and the teachers are so great, it’s easier to get good grades,” she says.

Outside of the classroom, she trains with her fellow AFROTC cadets and periodically takes a push-up, sit-up, and running fitness test. “Fitness wasn’t easy at first but with lots of hard work it has become a lot easier for me,” she says.

Purely for fun, she plays intermural broomball and softball; and often relaxes with her teammates after the games.

BLUE SKY AHEAD
In January 2016 she received some important news. Samantha was chosen to train at Randolph Air Force Base in San Antonio, Texas.

After graduation in May, Samantha and 11 other UMD grads will land on Air Force bases around the country. Some will become airplane pilots, others civil engineers, office workers, or other varied positions. Samantha will begin Drone Pilot training.

She won’t be alone in Texas. One other UMD grad has been chosen for the San Antonio site as well. “They say it’s a small world in the Air Force,” Samantha says. “No matter where you go, you meet new people as well as people you have worked with before.”

She doesn't want to give up civil engineering, so she is leaving her options open for a future landing site. She wants to pursue the Air Force first, but she hopes to one day return to engineering. “The civil engineering profession is so interesting and so very important,” she says.

SUPPORT IS THE KEY
Samantha said her mother is her role model. “My mom is an inspiration for me.” Samantha’s mother is a project manager, so she has to keep a lot of things moving at once. “My mom always challenges me to try new things and she pushes me to be the best I can be,” said Samantha.

With her mom behind her, Samantha has the support to dive into Air Force work and civil engineering. With the confidence within herself, she has been able to excel.