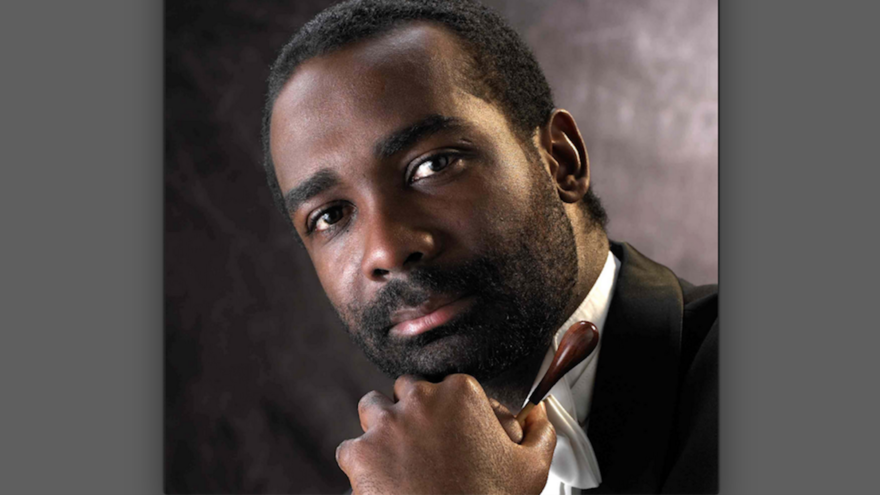 Jean Rudy Perrault, professor of music in the School of Fine Arts, will be honored at the 2019 CJMM Annual Fundraising Dinner on Sat., March 23, 2019 from 5:30–9 p.m. at the Greysolon Ballroom in downtown Duluth. Each year, he lives out his commitment to honoring diversity and caring for others.

Over the past six years he has presented a concert series entitled "Shades of Africa Festival," celebrating the rich offerings of composers and performers of African descent. He recently participated in a yearlong 100th birthday celebration of Nelson Mandela. For these and many other contributions, Rudy is deserving of the award.

Below is the biography prepared by the Clayton Jackson McGhie Memorial, Inc. committee.

Beginning in the fall of 2000, Rudy accepted his current position at the University of Minnesota, Duluth (UMD). As the Director of Orchestras and Professor of Music at UMD, Rudy coaches chamber music, conducts both the Symphony and Chamber Orchestras, teaches violin and viola, the Graduate Literature classes and the Graduate Conducting classes.

He has guest conducted numerous ensembles, internationally, including Sinfonietta de Paris, the Karelia State Conservatory Orchestra (Russia), the Conservatoire de Paris région Boulogne-Billancourt (Paris, France), members of the Vincenzo Bellini Conservatory of Palermo (Sicily, Italy) and the Hacettepe Conservatory Symphony Orchestra (Ankara, Turkey). He is a frequent panelist on national and international, instrumental and conducting competitions, and has participated in numerous music festivals. As an educator, he has conducted master classes and pedagogical workshops in many countries, including Venezuela where he worked closely with members of El Sistema organization (FESNOJIV).

As a performer, Rudy has performed with many different organizations including the Duluth-Superior Symphony Orchestra, the New York Virtuosi, the New York Pops, the Vermont Mozart Festival Orchestra, the Chamber Orchestra of Philadelphia, the Philadelphia Virtuosi, the Brooklyn Philharmonic Orchestra, the Philly Pops, and multiple musicals/shows on Broadway (NYC). His performances have taken him around the globe and his compositions are equally in demand by individuals and ensembles in all four corners of the world.

Recent compositions include: Nostalgia, a string trio celebrating the contribution of Jean-Baptiste Pointe du Sable (founder of Chicago), Still Around a setting of the poem by the same name, Brother Malcolm - for cello and piano (a fictitious conversation between Malcolm X and Martin Luther King, Jr. on the inauguration of Barack Obama as 44th President of the United States), Exodus for String Quartet (recorded by multiple ensembles, including the Borromeo String Quartet), Z.O.E. a string quartet that served as the soundtrack for the documentary Zombie, Origin and Evolution. Future projects include setting to music three poems of world-renown author Edwidge Danticat, composing a duo for violin and cello (Dialogues for Violin and Cello), and a ballet Seremoni. During the past several years, he has been editing and orchestrating the piano works of Haitian classical composers.

Past CJMM Gala honorees include:

About the School of Fine Arts Department of Music

About the CJMM dinner About the Clayton Jackson McGhie Memorial