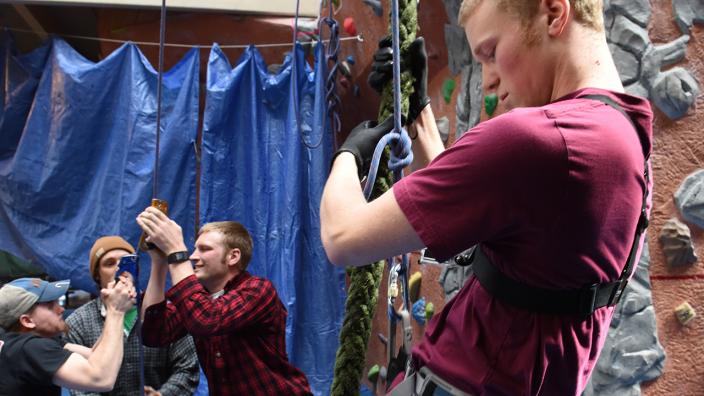 UMD students have developed a potential solution to fast rope descent injuries for the U. S. Air Force as part of a design challenge.

Talk to a member of the military that has dropped from a helicopter by sliding down a rope and they’ll tell you it doesn’t take long to generate heat and injuries from the friction. A group of UMD students aim to provide a solution to this problem as part of a design challenge from the Air Force Research Lab.

Eight students in the Mechanical Engineering Department have been brainstorming, designing, analyzing and coordinating with vendors and sponsors to develop what they’re calling the PyroGlove. On Tuesday, April 12 at 2:00 p.m. the Bulldogs will demonstrate how the glove works by doing a few fast roping runs in the campus sports center. They will then take thermal image scans of their hands to read how well the gloves absorbed the heat generated by the friction.

“The materials we’re using with the glove allow for a good solid grip and better stopping power,” said UMD senior Will Feyder. “And they’re not bulky which means soldiers will have the dexterity to immediately operate weapons and equipment on the ground while still wearing the gloves.”

This project typically involves a year of work for students at other schools, but Feyder said the UMD group runs this challenge as a capstone project so they only get one semester to work on it. Despite the short schedule, they’ve made it past an initial round of judging and have been selected to present their prototype at a conference in Tennessee along with about eight other universities from across the country.

The students had a $17,000 budget to work with so they did not have to get out any sewing machines. They were able to collaborate with local businesses, including Duluth Pack, MakerSpace and Proto.Hub, to buy the high-tech fabric involved and create the gloves. The palm side of the PyroGlove is made from lambskin and deerskin surrounding strategically placed Pyrogel pads that reduce heat while the back is made of a high grade material that is fire resistant, breathable and flexible.

Team member Ryan Farrelly is excited about the product they’ve developed and said the challenge has put all of their engineering skills to the test. “It’s a true-to-life challenge because we’ve also had to learn how to work with outside companies and deal with all of the frustrations that can come from the manufacturing process,” said Farrelly.

This is just one of many senior design projects within the Mechanical & Industrial Engineering Department of our college. To see video and additional photos of the group and their invention. Here are links to local media stories: Northland's News Center, WDIO News, Fox 21 News and the Duluth News Tribune.