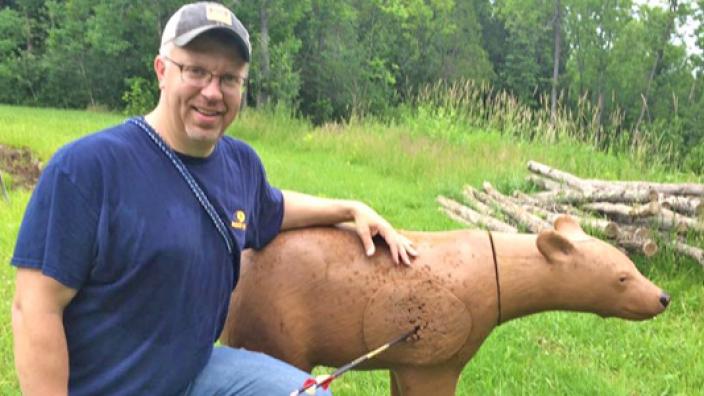 Rick Brill, LSBE's IT Director, tragically passed away on September 27, 2015.

It is with tremendous sadness that we say goodbye – much too soon — to an extremely well loved man.

A native of Lake Nebagamon and resident of Superior, WI, he was an avid Packer fan with a cunning wit. A dedicated computer professional (and self-proclaimed nerd), he took the time for each individual person's needs, making everyone feel important.

He started at UMD in 1997 and came to LSBE from ITSS in 2010. Though we only had him at LSBE for a very short five years, he touched many, many hearts here.

Some of Rick's LSBE colleagues pay homage to him below.

When I think of Rick, the first thing that comes to mind is his passion for the outdoors. I always looked forward to talking to him upon his return from his hunting trips. It didn't really matter how "productive" the trip was; it was the company of his friends and the fact that he was outdoors enjoying the nature that mattered the most to him. Rick truly knew how to live life to its fullest. — Associate Dean Praveen Aggarwal

Rick would stop by my office, daily, and say, "Hey, do you know what's awesome?" and without a second hesitation, he would quickly answer, "ME!" This ensured a smile each day! Sometimes he would also do this to our student workers, and at times, I would respond with teasing tone, "Oh, thanks Rick for the reminder, I had almost forgotten!" — Mackenzie Bolf, Executive Operations/Student Services Specialist, Advising and Academic Services

In my lifetime, I've had the pleasure of meeting few very special individuals who bring cheer to all they meet, someone whose smile and friendliness make them instantly approachable, someone whose work ethic and communication skills also make them stand out in terms of accomplishment. Rick Brill was one of those rare folks. From the time I met him as a student in the first class I taught at UMD, Rick impressed me as a winner. Probably everyone who knew Rick considered him to be one of their best friends. I know I did. Rick, you're missed, my friend! — Steve Castleberry, Professor of Marketing

Rick was one of those rare individuals who understood technology but understood people so much more. In a land of 'Purple and Gold', he was my 'Green and Gold' Packer buddy and confidant. We liked to touch base on Monday mornings for a complete breakdown of the previous day's game. Rick was a kind and gentle person. His friendly smile and outgoing personality are missed by all of us in LSBE. — Loren Erickson, Instructor of Accounting

As English majors, he and I would occasionally spar about grammar. He knew I boiled over when someone would abuse the word "myself." However, he, himself, would stumble in some of our website task force meetings, and I would tease him. He’d say "myself," I'd interject "me," and he'd just stop talking and give me one of his notorious "kiss my butt" grins that warmed my soul, as I just knew it was meant with genuine friendship. He made working here fun in so many ways! — Gina Grensing, Editor/Writer, LSBE and Bureau of Business and Economic Research

Rick had a gift for entertaining and humorous "tall tales." My favorite was after his return from a turkey bow-hunting trip to Kansas. He had me in tears laughing as he told how a buddy had gotten a bird and put it in the small, rural motel bathtub to clean later after going out for a burger and beverage...only to return and find the turkey was very much alive! They were greeted by a very animated bird with the accompanying feathers, blood, excrement, and well-known sharp spurs of a wild turkey wreaking havoc upon their return to the room! — Kurt Guidinger, Instructor and Academic Advisor, Advising and Academic Services

This past summer, I stayed in Duluth to work. The building was extremely empty, especially when my boss went away for a couple of weeks. I sat in the FMIS department alone. Talks with Rick made it less lonely. Even though he was busy, when he was upstairs, he would drop in just to make sure everything was okay. One day, he walked past my window, and I thought he had continued downstairs, when all of a sudden he jumped back into sight and yelled 'boo!' I jumped so high that I almost fell off my seat. — Mary Pruitt, Student Assistant, Finance and MIS

I didn't know him very long, but I found he was always so welcoming and considerate to everyone. He brought a sense of humor and eased tense situations. I especially remember not long after I arrived, he was giving me the lay of the land, and bluntly said, "Ang, I'm gonna give it to you straight." (He accompanied this with a backward hand motion.) I just knew he was someone I could trust.

We'll never be the same. That part is hard.

I'll remember the fun and lightheartedness that he brought. Though I'm new, I noticed that immediately; that seemed innate to who he was. — Angie Soderberg, LSBE Internship Director

There is such a lull in our collegiate unit as we are ALL grieving a large loss of a cherished soul! Rick Brill was officially our IT go-to-guy, but to many of us his presence and willingness to help with humor and a smile made it truly "Brill"iant to work here especially when times were stressful! He specifically wouldn't let me forget the time I failed to remove the plastic from the head of the ink cartridge and called him to come fix the printer. I consider myself pretty tech savvy, but he caught me in a rare moment. — Georgina Spears, Executive Office and Administrative Specialist, Finance and MIS

With Rick's unexpected passing, I lost not just a friend but also a football nemesis. As a Vikings fan, I had to face Rick's friendly taunts on an almost daily basis; we teased each other mercilessly. I will miss having him stop by my office for a friendly gloat after each Packers win. We were planning to get together to watch the Vikings-Packers game this year. I will remember him every time the teams play each other. Whoever wins, I will have an imagined conversation with him about the game. Cheers, Rick. — Rajiv Vaidyanathan, Professor of Marketing

I recommended Rick for the LSBE position because I saw a man who understood technology and who could navigate the political and non-budget friendly waters of academia. It's rare to find someone with those combined characteristics in the technology field. He was always available to assist with a technology problem. He had good advice and insight to accomplish the task. Someone told me that balance was a key to making life work. I believe Rick brought balance to the world around him. I will always remember our technology and political chats. Thanks, Rick, for making my life a little easier. — Curt Walczak, Business Consultant, Center for Economic Development

What sticks out most in my mind about Rick was his genuine nature of caring for others. Whether it was work related or personal, he was always there with a helping hand and a hug. He became a staple at my desk most every day. His presence there became something I looked forward to, whether it was to share conversation, a laugh, or work related material, Rick took genuine interest in the friendship we shared. He taught me many things throughout the journey of our friendship and for that, I'm forever grateful. Rick, YOU are amazing. Remember that. Always. — Kara Ward, Executive Office and Administrative Specialist, Management Studies

Though Rick and I became friends at LSBE, we were more like family. He could read my face and know what I was thinking and what I needed, even when I didn't know myself. He'd try to make me laugh, doing things like sneaking up and kicking my ball chair out from underneath me. He was very proud to have succeeded at this— once. He also knew when I just needed a hug. I'm a better person for having known him. "We've come a long way from where we began, and I'll tell you all about it when I see you again." — Carlee Williams, Program Specialist, Marketing & MBA Program