A Catalyst for Student Success 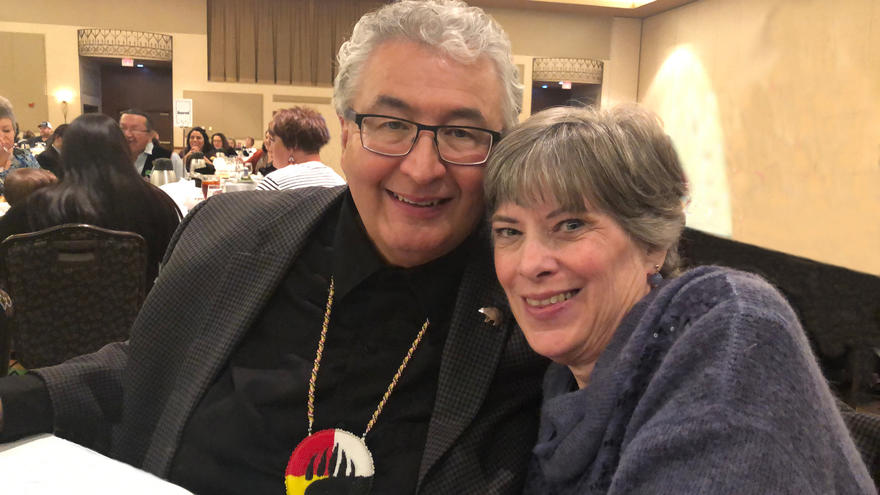 Rick Smith stands up to speak. Conversations stop and the group quiets. He has that effect on people. His voice is deep and it carries, even though he doesn’t speak loudly.

This time he is surrounded by 22 students, almost all of them of Native American heritage, most from UMD and the College of St. Scholastica. They are at Arlington National Cemetery. He tells them about the American Indians buried here, men and women who served in the world wars, in Vietnam, Korea, Afghanistan, and others.  He tells them about HEROS, the Higher Education Returns Opportunities Scholarship, which provides academic scholarships and fellowships for UMD students who are military veterans, active duty service members, National Guard, or Reservists. He tells them that he honors the people who keep peace, guard the nation from danger, and risk their lives.

Then he hands out coins, military challenge coins, to the students. They are commemorative coins that honor veterans, created and sold to raise funds for the HEROS scholarship fund and Operation One Voice. He invites the students to walk up to one of the service members on duty or visiting in the cemetery, hand them a coin, and to thank them for their service.

It’s typical Rick behavior: tell a story and invite an action. It’s how he encourages learning through experience. It’s how he influences students as the director of the UMD American Indian Learning Resource Center.

In November, 2018, Rick was honored with the Minnesota Indian Education Association Lifetime Achievement Award for his “outstanding leadership, contributions, and lifelong dedication to Indian education.” 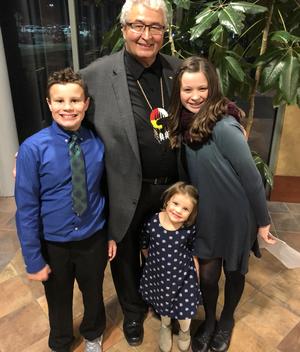 Rick Smith and his grandchildren. Above Photo: Rick with his wife, Dianna.

It is well deserved.

Rick has a reputation for fighting for students in order to help them succeed. Since 1988, he has held the director position at UMD’s American Indian Learning Resource Center (AILRC). He joined the program in 1998 with a goal of increasing the recruitment and retention of American Indian and Alaskan Native students. The numbers speak for his success. From a group of 68 students when he started, to well over 200 students today, Rick does everything in his power to create an environment for student success. He has worked with hundreds of undergraduates and graduate students knocking down barriers, and there are many, that stand in their way to graduation.

Along the way, he built the largest American Indian and Alaskan Native culturally-specific public library in the upper Midwest, probably in the country. The library started with eight books in 1988 and now has thousands of book volumes and media.

If you mention any of these accomplishments, Rick will talk of the elders who came before him, and whose shoulders he stands on: Tom Peacock, Larry Aitkin, Ruth Myers, Rosemary Christianson, his coworkers, and others. He also conveys that his mother was a guide and a force in his commitment to giving back to his community. He respected those who came before him, but he touched many lives himself.

Rick is an enrolled member of the Red Cliff Band of Lake Superior Chippewa, born in Cloquet and grew up in Duluth. He started his work life at the Chicago Northwestern and Burlington Northern Railroad, but after an accident took him away from railroad work, he enrolled in the UMD social work program and graduated in 1985. He worked as a counselor and probation officer with juveniles and was the coordinator of the Guardian as Litem Program for northern St. Louis County before taking the helm at AILRC. He kept on learning, receiving his Master of Education degree from UMD in 1999.

He and his wife Dianna have three adult children and three grandchildren. He is quick to say his successes and sacrifices are shared with his family. “As we are well aware, when you work in Indian Education, it is not for the weak at heart, you live to work, not work to live, and your family sacrifices as much as you do. My family’s sacrifices, afforded me time for both my undergrad and graduate degrees, during the crucial years of their young lives, and they gave me their unwavering support of my job and my involvement in civic engagement since.”

He has been an independent consultant for the Blandin Foundation, serving as a recruiter and cultural liaison for the Blandin Reservation Community Leadership Program, which has trained over 700 community leaders from all 11 reservations in Minnesota. 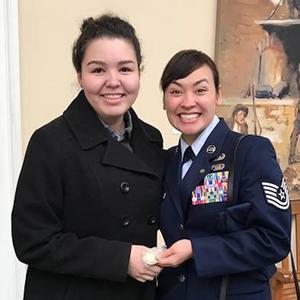 He served as a member of numerous other civic and academic boards/committees locally, regionally, and nationally.

The Impact on Students

Jasmine Landry, a UMD student and member of the Bad River band, was on the trip. She said that sharing coins with veterans was one of the most moving experiences she had on the trip. "I was nervous at first, but then I felt happiness and pride. When I presented challenge coins to three veterans, one of them explained to me that it's usually the other way around. He said people don't often give things to them and it meant a lot to him to be honored. Being able to thank veterans for their sacrifices was important and I'll be forever grateful to Rick for encouraging me."

UMD will celebrate Rick Smith's Lifetime Achievement Award from MIEA on Tuesday, March 26, 2019 from 11:00-1:30 pm in the Kirby Ballroom at the AILRC Spring Feast. A short program will be held at 11:30 am.