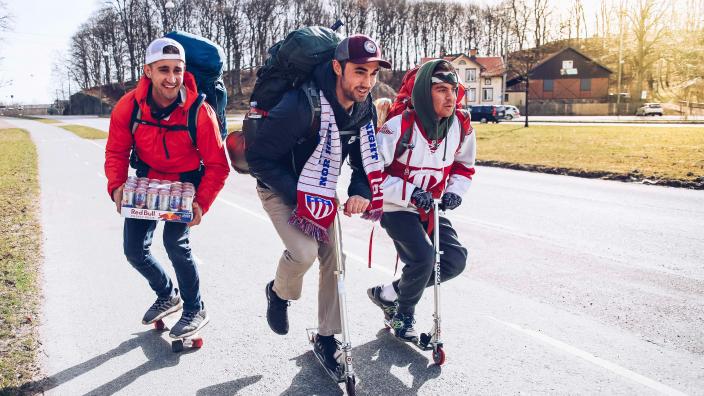 Three friends named themselves “BroPeds,” traveled overseas, and used their sales and marketing skills in a most unusual way.

Two hundred college teams from sixty countries traveled to checkpoints across multiple countries using only Red Bull energy drinks as currency. The winner was the team that accumulated the most points from hitting checkpoints and performing challenges. 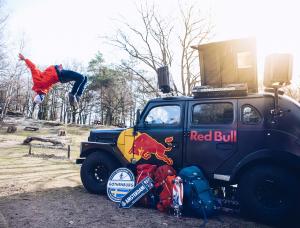 Achter shows his flipping skills at one of the stops.

Achter and Colucci swiftly utilized selling and marketing techniques learned in their LSBE classes to trade energy drinks effectively for everything from lodging to food to transportation.

“This opportunity was a perfect lesson in selling, said Colucci. “We woke up every morning without any guarantee of a meal or a place to sleep, which left us with the only option of bartering for our survival. We learned quickly that it was important to tailor our sales pitch to each situation.”

The team completed challenges along the way to accumulate more points. Challenges were representative of the local culture where they occurred and included cooking a traditional German meal in a professional kitchen and learning a choreographed dance in a studio and performing it in front of judges.

The generosity of people and availability of ways to make connections was prevalent. Achter shared, “After five hours of unsuccessfully securing lodging for the night, we met a young woman, Julie, in Amsterdam.  We shared our story with her over free French fries, and then she amazingly offered us her apartment for the night while she stayed with friends.”

BroPeds finished an impressive third out of the 18 total U.S. teams and 43 out of the 200 total international teams – many of whom were from Europe – and hit checkpoints in Stockholm and Gothenburg in Sweden; Copenhagen, Odense, and Kolding in Denmark; Flensburg, Hamburg, Berlin, and Cologne in Germany and Amsterdam in the Netherlands.

They returned home after their seven-day adventure with great memories (and three tattoos from Amsterdam courtesy of Red Bull bartering).

Achter and Colucci graduated from UMD in May. Both are actively pursuing job opportunities in the Twin Cities area in the creative and analytics industries.

View videos of their adventure on the Red Bull team page and read Colucci’s first-hand account in his article on LinkedIn.

Visit the Labovitz School of Business and Economics website.