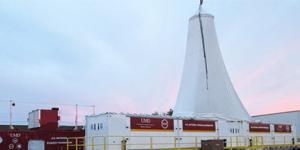 Completion and shipping of the RAID drilling system will be announced at the American Geophysical Union annual meeting in San Francisco on Thursday, December 17, 2015. The announcement will happen during a Town Hall meeting on Scientific Drilling in the Polar Regions, 12:30 -1:30 p.m., in Moscone Center West, Room 2002.

As part of a project supported by the U.S. Antarctic Program, which is managed by the National Science Foundation (NSF), researchers at the University of Minnesota Duluth (UMD) and Scripps Institution of Oceanography (SIO) are shipping a new deep-ice drill to Antarctica. The Rapid Access Ice Drill (RAID), a mobile drilling system capable of making several long boreholes in a single field season, was built to explore deep parts of the Antarctic ice sheets for the first time.

RAID’s unique drilling platform – mobile, fast, and capable of coring both deep ice and bedrock – will provide unprecedented access to critical parts of the coupled glacial and geological environment. “RAID therefore represents a significant technological step forward for glaciological, paleoclimate, and geological research,” says John Goodge, co-leader of this research and an Earth and Environmental Sciences Professor at UMD.

Construction of RAID began in mid-2014 and was recently completed through a process of fabrication, testing, and system integration. On November 5, 2015, UMD took acceptance of the drilling system in Utah from the principal contractor responsible for its development.

RAID is expected to depart by vessel for Antarctica this month. Initial tests of the RAID system will take place in Antarctica during the 2016-17 austral summer near McMurdo Station and may ultimately lead to searching for the oldest polar ice and revealing the tectonic assembly of the Antarctic continent.

“No one has ever tried drilling into the deep ice like this at either pole. We will get deeper and older paleoclimate records, possibly a million to a million and a half years old,” says Goodge. “We're also hopeful we can reach the geological formations at the base of the ice sheet; they've never been seen before."

RAID is designed to drill rapidly through the thick Antarctic ice sheets in order to reach old ice, the glacial bed, and the bedrock below. This new technology will provide a critical first look at the interface between major ice caps and their subglacial geology.

RAID is interdisciplinary and will allow access to polar paleoclimate records in ice more than one-million years old, direct observation at the base of the ice sheets, and recovery of rock cores from the ice-covered continent.

It’s unique because it can provide fast borehole access through thick ice (up to 3300 meters), take short ice cores for paleoclimate study, sample the glacial bed to determine ice-flow conditions, take cores of subglacial bedrock for age dating and crustal history, and create boreholes for use as an observatory in the ice sheets.

Together, the rapid drilling capability and mobility of the drilling system, along with ice-penetrating imaging methods, will provide a unique 3D picture of the interior Antarctic ice sheets.

This project is funded by NSF’s Division of Polar Programs to the University of Minnesota-Duluth and Scripps Institution of Oceanography. Principal investigators on the project are John Goodge (UMD), who studies geotectonic evolution of continental crust in East Antarctica and the origins of the Transantarctic Mountains, and Jeff Severinghaus (SIO), who conducts research on Antarctic paleoclimate by studying ice cores. Mike Jackson is the NSF program officer for the RAID project, coordinating funding, technical reviews, and operations.

Goodge has led scientific expeditions to Antarctica 12 times, but this project is his most extensive.