Matt Bisanz invested time in a study abroad program and was rewarded with an unforgettable summer across the Pond.

LSBE student Matthew Bisanz is a Finance major, and for the summer of 2017, he chose to invest in a study abroad experience he will never forget. Bisanz spent nine weeks in London, England, studying, learning, and traveling.

Matt posing next to a Buckingham Palace guard.

“I wanted to study abroad because I knew I wanted to try something new and broaden my experience,” Bisanz said. “I didn’t know any other languages, so that’s why I went to London. I was interested in their culture as well.”

When Bisanz was searching for the right study abroad program, he found that UMD was not offering one that fit what he was looking for, but he didn’t give up. “I ended up doing an external program which UMD sponsored called AIFS (American Institute for Foreign Study),” he stated. “It’s open to anyone. When I was in London, I met other students from all over the US.” 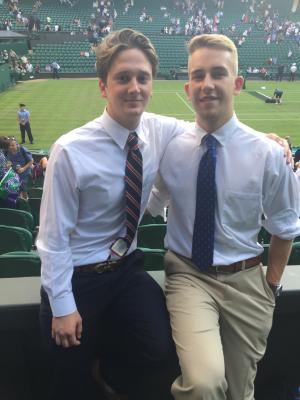 Matt (left) and a friend watching the Wimbledon tennis tournaments in London, England.

Bisanz faced a couple of challenges when applying to study abroad. “First, I had to be accepted by AIFS. That was a pretty rigorous process.” After being accepted into the AIFS program, Bisanz had the task of choosing which classes he was going to take. He recalled, “I had to pick a specific class that I needed and take it to the head of that department here at UMD and have them approve it. I had to write a petition for each class, too.”

Bisanz couldn’t take any business classes during his time in London, but he eventually found other classes that were approved by UMD. “I took three classes over there for three weeks each,” he said. “I took a class comparing the history of the US and the UK, a photography class, and a psychology class.”

During the nine weeks that Bisanz was abroad, he attended his classes at the Richmond American International University of London. “I stayed in the campus dorms in Kensington. Everything was really gorgeous. The school was just a block away,” he remembered. “I had a roommate who I didn’t know, but we became pretty good friends in the process. He was from Charlotte, N.C.,” Bisanz added.

Like most travelers, Bisanz had some culture-shock when he arrived in England. “I calmed down and adjusted to it,” he said. “I was able to make friends right away.” 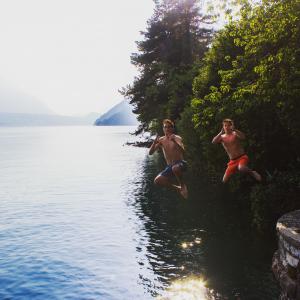 Matt (right) and a friend jumping into a lake during a short trip to Switzerland.

With these new friends, Bisanz explored London and made the most of his time there. “There were a bunch of activities that I did. One of them was touring the Chelsea Stadium and going to a rugby game.” He continued, “I went to a cricket game, Shakespeare’s theatre, and I toured Kensington Palace.”

However, Bisanz didn’t just stay in London. He stated, “Once you’re in Europe, it’s a lot cheaper to travel. I went to Paris, Venice, Amsterdam, and Switzerland. That was my favorite.” He remembered, “I got to go swimming in the lakes in Switzerland and the mountains were just beautiful. My friends and I climbed on a hiking trail all the way up a mountain. I had never done that before.”

Even though Bisanz had to do some work to apply for his external study abroad program, he said, “I would definitely recommend that other students study abroad, especially with AIFS. I really liked their program.”

He concluded with what his study abroad experience meant to him: “It changed my view on life. I was able to learn a lot about other cultures. It made me really grateful that I live in America because some countries don’t have programs set up for the poor and the homeless. Seeing that made me appreciate what I have.”

Be sure to check out the LSBE and Study Abroad websites to learn more about the programs they have for you!