The Book that Inspired a Career 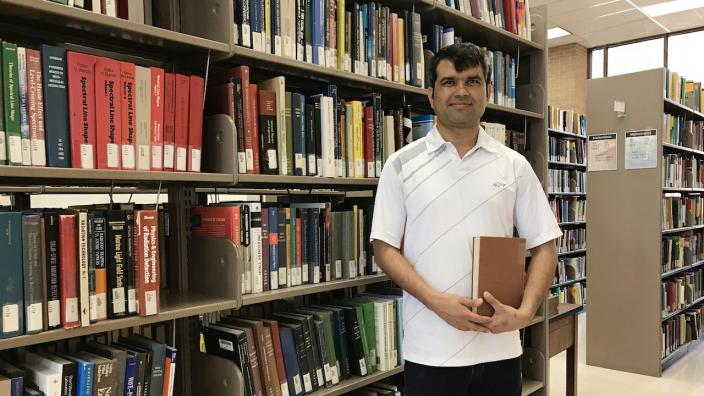 Early in the morning, graduate student Prabhat Bhattarai sat at a desk near the window, his head bowed over a book. When he looked up, he could see people scurrying to work in Kathmandu, the city below the university. He smiled, bent his head again, and read another page.

The book? Gravitation and Cosmology: Principles and Applications of the General Theory of Relativity by Steven Weinberg.

“It was the most expensive book I had ever held in my hand,” said Prabhat. It cost over $100, a fortune by Nepal standards. “Buying a copy was beyond my imagination,” he said 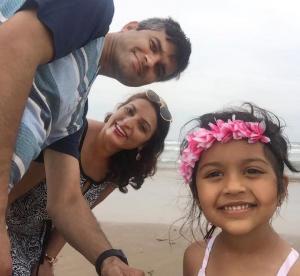 Prabhat, Sharmila, and Arya on a beach adventure.

Eventually, he photocopied it. “I read it over and over,” Prabhat says. “It was about more than science, it was philosophy too. It was fantastically good and I wished I could meet its writer.”

Prabhat’s competency with the book’s material and his studies in other areas propelled him through graduate degrees, research work, and teaching positions at several institutions.  After Kathmandu’s Tribhuvan University, Xavier International College, and the Indian Centre for Space Physics, Prabhat arrived at UMD for his Master of Science degree in Physics.

Little did Prabhat know that just a few years after holding Gravitation and Cosmology for the first time, UMD would bring Prabhat closer to Professor Weinberg. At a conference, Professor Habig introduced Prabhat to Karol Lang, a colleague of Professor Weinberg's at the University of Texas at Austin (UT-Austin). That conversation led to Prabhat's acceptance into the UT-Austin Ph.D. program, in the same department as Professor Weinberg.

DEEP IN THE HEART OF TEXAS

At UT-Austin, Prabhat was able to take a course with Weinberg, and more. “I went to his talks; I met him many times; and I talked to him as we rode the elevator together.”

In Texas, Prabhat switched gears. His Ph.D. research was in relativistic heavy ion collision physics. He worked in STAR collaboration at Brookhaven National Laboratory, Long Island, NY to study of the properties of hot and dense QCD matter. Such hot dense matter is created by the collision of two nuclei at very high speed. One of the objectives of the experiment was to search for a new state of matter called the Quark-Gluon Plasma, which is believed to be the state of matter existing in the universe shortly after the Big Bang. Prabhat contributed to many publications from STAR collaboration.

INTO THE TECH SECTOR

With his Ph.D. in hand, Cisco snapped up Prabhat to work as an engineer on the design, operation, and analytics of their network infrastructure. He now dives deep into Cisco's cyber security systems and focuses on a hot new area in the technology industry. He works with Cisco's "Internet of Things," or the interconnection via the Internet of computing devices embedded in everyday objects, enabling them to send and receive data.

All along the way, Prabhat has been joined by his wife, Sharmila. They have made a home in Austin. Sharmila, who attended social work classes at UMD, is back in college pursuing studies in computer science.  The two are the busy parents of their five-year-old daughter, Arya, but they find time to add lots of family play to their work and school schedules.

What’s next? Prabhat is still interested in academics, but for now, “My job at Cisco is challenging and rewarding," he says. "Every day we have a new set of problems to solve.”

About UMD's Department of Physics and Astronomy