Out with the Old? Not So Fast.

UMD's "time capsule" get a makeover

The Ven Den is embedded into generations of Bulldogs' memories. But of those, who noticed the Yoo-Hoo?

Solveig Bloomquist sees the details, “There was one vending machine in there that just had four rows of Yoo-Hoo and that’s it! It was completely empty except for these four rows on the bottom for the longest time. Just Yoo-Hoo!”

Solveig's ability to get to the brass tacks of the situation combined with an uncommon passion for preserving authenticity floated her Ven Den redesign idea above the rest. As a theatre design and production major, she also has an expertise that enabled her to think of the Ven Den as a set, but it was her mindset that really sealed the deal.

A campus-wide competition last spring invited students to reimagine the Ven Den. The space literally came with the education building in 1966 (renamed Bohannon in 1973). Because it wasn't in any one department's wheelhouse, Pat Keenan, director of operations for Student Life, says it stayed pretty much the same for nearly 50 years, until he happened to walk through one morning, take a good look around, and say to himself, "This place could use a little attention."

It was kind of like the basements in many families' homes, filling college students with nostalgia when they came back for a visit. It was a UMD time capsule and a collective memory for alumni. Because of that, the dated walls and furnishings were largely forgiven. Orange and white linoleum floors, wood paneling, and plastic stools escaped the remodeling happening in more visible parts of campus.

But today's students were struggling with yesterday's accommodations, like not enough outlets for their laptops. So Pat formed a steering committee comprised predominantly of students and simultaneously started to secure funds. He raised the needed $250,000: $125,000 from the Student Service fund, $55,000 from Dining Services, $50,000 from Facilities Management, and $20,000 from the Chancellor's Cabinet.

The committee entered the process with the understanding that the Ven Den is a campus standout. Pat says, "We were looking for a space that had a signature design, designed for students to be used by students."

Solveig understood this. “It’s the one thing that people come back to campus and their like, ‘Oh, ha ha. The Ven Den," Then, in the same breath Solveig adds, "Seriously guys. The Ven Den! Don’t get rid of it! It’s so cool!”

Not only does Solveig appreciate authenticity, she's passionate about it. For example, when talking about the 1990s advertisements on the Ven Den walls that had to be removed for the remodel she says, “I guess that’s... fine,” in a way that makes it seem like it’s not fine.

The roots of her zeal were planted in Grand Forks, North Dakota, watching her mom rosemaling, a painting-style infused in Norwegian tradition. “There are so few people who take the time to do that anymore because you can do everything on computers. It’s a dying art. I’ve watched that die my whole life and that’s something I’ve been thinking about lately."

Perhaps that's why her design goes beyond a nod to the Ven Den's mod beginnings, it actually enhances it. Pat Keenan says other design ideas paid homage to the North Woods or rethought the Ven Den as a modern masterpiece, but Solveig's was different. "Solveig was the only one who chose a neo-retro design."

“I do love new things, and change, and progression, and making things better, but sometimes it’s fun to not,” she explains. Here's what the Ven Den's "not" will look like.

Solveig reacted to the design idea competition with, “Let’s do it! It’s the Ven Den, and I love the Ven Den.’ But mostly I was like, ‘If they do away with the orange, I’m going to be so pissed.” So, of course, the orange is the focal point of Solveig's design idea.

“I kept the orange," she says, describing what the room will look like. Solveig's lighting and scenic design emphasis enabled her to keep the signature parts of the Ven Den and tweak other aspects, like replacing the harsh glare of fluorescents with LED lights and adding seating that will be a little less bruising for Bulldogs' marathon study sessions. "The floor is very similar but half will be carpeted with circle couches and fluffy pillows. It has olive green and maroon red in the patterns in the furniture, and high stools but with little pads on the seats so your butt doesn’t fall asleep after half an hour.”

Will a winning interior design shift Solveig's focus from theatre? Not a chance, she says. “Rooms are lame. It’s really hard to be able to design a fun room as opposed to a functional room that everyone is going to be OK with and no one is going to get upset over. Theatre’s supposed to upset people sometimes and that’s way more fun.” 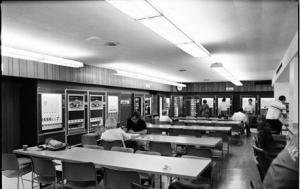 While most are away enjoying the holiday break, the Ven Den elves will be busy making Solveig's vision a reality. The furniture will be delivered, soon, and the Ven Den is scheduled to reopen on January 20, the first day of the spring semester.

Among the changes, the machine with four rows of Yoo-Hoo that captured Solveig's attention will be gone, but there may or may not be a top secret "buy one, get one free" pop machine that she really hopes will be back in place with the rest of her neo-retro award-winning design.

UMD's Alumni Association recently posted about the Ven Den remodel and was flooded with recollections of this little space tucked into a Bohannon hallway for decades. Here are a few:

Jeremy Beck: Has to be the last part of campus that hasn't been touched since I was there. To date myself, I was studying there the night of the infamous Halloween blizzard of '91. That was a long drive home that night - should have just crashed in the Ven Den.

Mindy Granley: First date with my husband of nearly 14 years was in the Ven Den: hot chocolate + studying!

Jodi Kimble: Study groups, friend hangout, a place more for socializing than studying in the mid-90s. It was the social hangout between classes. Great place. I hope the remodel keeps the spirit of the place alive.

Linda Dunaiski: I went to UMD from 1972-76. Microwave ovens were pretty new at that point and because of that, there was a sign on it that said "microwave ovens may be hazardous to your health." Scribbled underneath that, someone had written "so is the food here."

Donielle Buron Bennett: We loved the Ven Den and took our kids to see UMD last spring, couldn't believe it hadn't changed a bit! It was kinda cool, since most of the rest of the school has been updated. We took pics, think the students studying there thought we were nuts!

Travis Pepin: I wish they would have kept it the way it was! Loved that place. Spent many lunch dates there with my girlfriend, took her back to the Ven Den (what was left of it) a couple weeks ago and asked her to marry me! Luckily, she said yes!

Read all the responses, here. (Scroll down to December 3 post.)