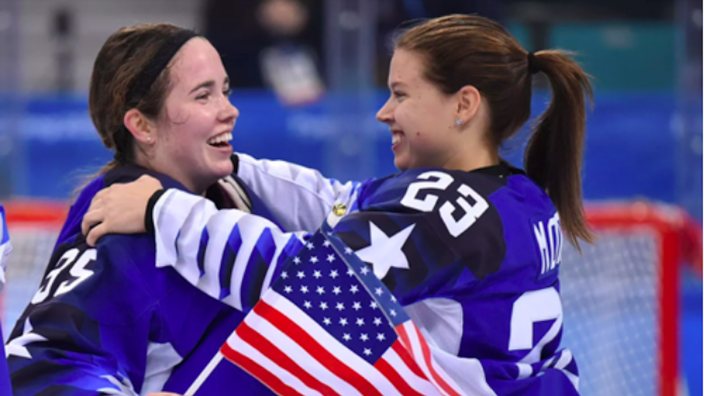 UMD's Maddie Rooney and Sidney Morin bask in a glow of Gold!

Maddie Rooney may be only 20 years old, but her performance Thursday for the United States in the Olympic gold medal game just made her a legend.

The University of Minnesota Duluth women's hockey redshirt junior made 29 saves and stopped Canada's last two shooters to help the U.S. win its first Olympic gold medal since 1998 in a 3-2 penalty shootout thriller at the Gangneung Centre.  Rooney, along with 2017 All-American defenseman Sidney Morin, join Bulldog legend Jenny Potter as the only U.S. gold medalists in program history.

The game showcased some of UMD's greats, and as if on a Bulldog script, it was Morin who had the first assist on the power play goal that put the U.S. up 1-0 with 26 seconds left in the first period.  Morin's shot was redirected by Hilary Knight — the second power play goal in as many games that the two had paired up on.

Former Bulldog Haley Irwin drew Canada even at 1-1 two minutes into the second period, deflecting a pass past Rooney's glove for her second goal of the tournament.  Canada struck again at 6:55 to take a 2-1 lead that stood until Monique Lamoureux-Morando tied it up with a breakaway goal with 6:21 left in regulation.

After 20 minutes of overtime and 29 often incredible saves, Rooney was left between the pipes as the last — and only — line of defense the United States would have to win a gold medal.  The Andover, Minn. native stopped four of the six shots she faced in the first-ever Olympic shootout, including the last two Canadian shooters Brianne Jenner and then Meghan Agosta on her second attempt.  As soon as Rooney realized Agosta's attempt wasn't going to cross the goal line, the U.S. gold medal celebration was on.

While Rooney and Morin grab their first Olympic gold medals, Canada defenseman and All-American Brigette Lacquette picked up her first Olympic medal.  Lacquette joined Irwin and former two-time UMD All-American defenseman Jocelyne Larocque in earning silver medals.  It marks the third Olympic medal for Irwin, who won gold in both 2010 and 2014, and the second medal for Larocque, who like Irwin, won gold in 2014.

Rooney, who will rejoin UMD for the 2018-19 season, also joins Irwin as the only player to centralize in the midst of their college eligibility and return to Duluth as a gold medalist.  Both Caroline Ouellette (Canada 2002) and Potter (1998) won gold medals before they arrived at UMD, but only Irwin and now Rooney earned their gold medals as current Bulldogs.

PHOTO ABOVE: Courtesy of AP