One year after graduating from UMD with a Environmental and Outdoor Education degree, Nova West is sitting at an editing desk for the television show "The Incredible Dr. Pol." It’s a reality television show on Nat Geo Wild, and it follows the veterinarian Jan Pol, his family, and employees. 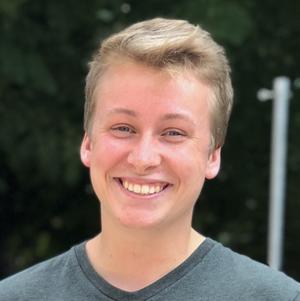 “I work as an assistant editor and junior editor. I take the raw footage and audio from the field and create projects for editors and producers,” Nova says. “I work nights so I can export the editors' cuts at the end of the day and have them ready to screen for the producers in the morning. I also get to cut interstitials for episodes and help the editors and producers assemble our compilation episodes!"

The start of the adventure came when Professor Ken Gilbertson saw a teaching video Nova made for a UMD outdoor education class. “Ken loved it,” Nova said. “Ken took me aside and asked if I would be interested in applying for an internship at National Geographic Television. The answer was yes!”  With graduation around the corner, Nova used their spare time to study documentaries and continue practicing shooting and editing film. After months of planning, Ken and Nova were finally able to secure the internship.

“At first I was scheduled in the New York office but at the last minute, I was switched to Washington, D.C. Luckily, a family friend of one of my classmates offered me a place to stay, and I started work as an assistant production coordinator.” Nova wrote contracts for the photographers and videographers, processed invoices, and took care of hundreds of behind the scenes details.

“I had one great experience,” Nova says. “I worked as a production assistant for a pilot show on search and rescue dogs. Each episode covered incidents about finding a scent for lost pets using familiar items.”

“The staff was incredible, and I made great friends,” Nova said. “I have always had a creative and artsy side. I even studied studio art. When I was around creative filmmakers, I felt like I fit in.”

Studio art classes were one of Nova’s interest at UMD, and they provided background for the internship. Nova also contributed to UMD’s offerings as well, leading Transgender Inclusivity Trainings in classes and at conferences, as well as for the UMD Climbing Staff and Wolf Ridge Environmental Learning Center in Finland, Minn. “Everyone on the staff at National Geographic was welcoming.”

That welcome spread. When the internship was over, with the recommendations of their colleagues at National Geographic, Nova got hired for a second internship at GoodFight Media, a film and video production company in D.C. Nova worked with Dan Fipphen, who was an in-house editor at the time. "There was a lot of media managing, and the editing work became more frequent. Dan really took me under his wing and taught me everything I know about editing. Without his help, I wouldn't have developed those skills in such a short amount of time."

The internship ended in February 2018, and as one door closed, another one opened. Nova was asked back to National Geographic as a contractor for The Incredible Dr. Pol show.

“I’ll never forget the feeling of walking into the office on my first day back,” Nova says. “I went through the ground floor security with my 3-D badge and then took the elevator up to the office. I looked at the great entry mural where flecks of light represent the night sky. And then everyone welcomed me back.”

About the Environmental and Outdoor Education major