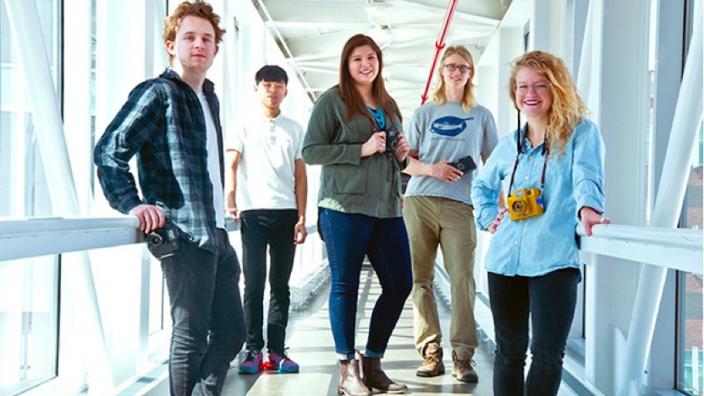 The temporary closure of Cina Hall created a problem for Assistant Professor Wanda Pearcy's displaced photography class– it found itself without a dark room.

Like all good stories, this one has a heroine. She's a little gal named Holga who dusted herself off and created a picture perfect ending for five artists who never imagined they'd work together quite so closely.

The three seniors, one junior, and one sophomore were drawn together by Wanda's class. Christopher Wodicka, Weijia Chen, Kara Pearson, David Rostvold, and Elizabeth Huninghake are studying art, which Wanda describes as generally narcissistic.

She pushed back at this idea by directing her students to create something together. "My intent is to start a conversation about how they will be collaborative as artists," says Wanda. She points out that 80% of art grads won't have careers as artists, "But they will have a transferable skill– how to work together."

Wanda's students upped the ante a bit by deciding to work as one big group rather than break off into smaller partnerships. And when they opened up their aperture, an unforgettable college experience was forever imprinted. "It started because we had to work together for our grade, but it grew into so much more," says Christopher.

Wanda explains creativity as anytime old and new are combined. With that preface, her class project was creative from the start. Without a darkroom, the students were using new technology, Epson printers, and old, Holga Cameras.

The Holga Camera was created in Hong Kong in 1981 and marketed to Chinese families looking for a way to document their life events. Before long, its signature Instagram-like photos were attracting quite a following. This was the tool given to Wanda's students for their class project and they, too, quickly became fans.

Elizabeth describes the "Bob Ross happy accidents" of light flares that leak through the holes in the frame. These imperfections were a new concept for Elizabeth and her team, who grew up with digital photography's apps and filters. With the touch of a button, red eye is erased and blemishes are banished. Not so with Holga. The artists had to learn how to get effects through trial and error and working with the camera.

Another lesson: delayed gratification. Weijia laughs remembering his subject's reaction to getting his picture taken with a Holga Camera. "My friend wanted to see it right after I took it, but I told him that he had to wait."

There's not much waiting anymore, with just about everything 'on demand.' Getting Holga's film developed became an event. Says Kara, "It's exciting because you go down to the True Color Lab inside Duluth Camera Exchange and pick it up and you're like, 'What did I make?"

David agrees, and says this lesson has carried into his digital photography. He now dwells more on his subject and less on his equipment; "I took a step away from my camera."

An art image created by the students.

The concept was seeded in the idea that we have two personas: the perfect one portrayed in social media and reality. "Masks" would somehow illustrate this while raising a few eyebrows in the process.Once a week for six weeks, the group met and planned their project.

So they'd file past Elizabeth's roommates, lights and cameras in hand, and head for the bathroom. The milky effect was, well, milk, so they added that to the mix of goods crammed in the tub. "It was super vulnerable because we were in swimsuits in a small bathroom," Elizabeth says. "So it was cool having that vulnerability through art. I really loved that." Adds Kara, "I don't know how we could be any closer."

The culmination of this close-knit crew's work is now on display as part of the Annual Student Exhibition. This year's event is in Life Science 307 while the Tweed Museum, the usual venue, is undergoing renovations.

Getting "Masks" accepted in the juried exhibition is the final chapter in David, Christopher, Elizabeth, Weijia, and Kara's collaboration story. 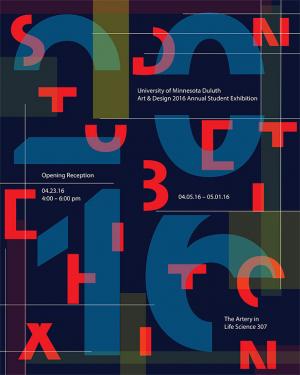