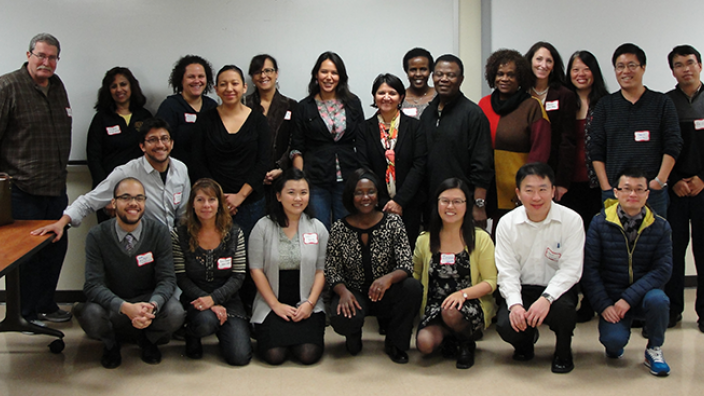 Heading into uncharted territory can be a bit unsettling. Having a guide, someone who knows the landscape, can point out the pitfalls, and navigate the terrain, can make any adventure a little easier.

The Program
Upon receiving the Equity and Diversity Transformation Award, Onchwari and Han propelled the project into action. “It’s important for faculty and staff of color, especially those who are new to UMD, to connect with someone who understands, someone who’s been there. Insoon and I reached out to faculty of color with diverse experience because we knew that they would bring their wisdom and experience to the program and help to make it successful,” Onchwari said. The senior faculty and staff included John Arthur, professor, Sociology-Anthropology; Mary Cameron, associate director and interim co-director, Human Resources and Equal Opportunity; Chris Davila, program coordinator, Latino/Chicano Student Programs; Priscilla Day, professor, Social Work; George Hoagland, assistant professor, Women, Gender, and Sexuality Studies; Hillary Kowino, associate professor, English; Krista Twu, associate professor, English; and Susana Woodward, director, Office of Cultural Diversity.

With support from Dean Jill Pinkey-Pastrana, from the College of Education and Human Service Professions, Onchwari and Han applied for and received a grant from the Office of Equity and Diversity, University of Minnesota Twin Cities, to launch the program. The program has three components: (1) An orientation for new faculty and staff of color, (2) A monthly meeting for participants, and (3) “Mentoring on the Run” in which a mentor/mentee pair or triad meet informally at least twice during the duration of the program. The program will also offer speakers at the monthly meetings who will share their experiences and perspectives. Recently Associate Director Mary Cameron, Professor John Arthur, Associate Professor Njoki Kamau from Women, Gender, and Sexuality Studies, Professor Maureen Tobin Stanley from Foreign Languages and Literature, and Professor Bilin Tsai from Chemistry presented a panel discussion.

Applications were sent out via email. Those indicating that they wanted to be mentors were asked what strengths they would bring to the program, and those who identified themselves as wanting to be mentees were asked to list three areas where they felt a mentor could help them. Mentees could also list a potential mentor if they had one in mind. Twenty-three pairs/triads were eventually matched.

“The program isn’t a substitute for what various UMD departments are offering, but will serve as an additional resource,” Onchwari stated. “Our goal is to create a network of resources to support the work of individual faculty and staff of color and promote a culture of mentoring through active interactions among them,” Han said.

Personal Experience
Han knows how important having a mentor and a network can be. Originally from South Korea, she remembers the surprise she felt at the end of her first semester of teaching when a colleague pointed out that some students had given feedback that they couldn’t understand her. “It was really a shock. No one had ever mentioned my accent,” she said.

Rather than feel indignant, she decided to take action. “My accent is part of my identity, but language is also communication. I want my students to understand me.” She learned about UMD’s  Communication Science and Disorders’ Speech-Language-Hearing Clinic and their accent modification service.

She liked the program. “It really helped my accent. I learned what words to accentuate and what is the right speed for a classroom lecture. It boosted my confidence,” she said. “This is an example of what diverse faculty might encounter. We can help each other.”

Mentees and Mentors
The people who signed up for the mentoring program are a diverse group in more than just skin color or country of origin. Some are just starting their teaching/higher education careers, while others have decades of experience. Some are American-born; others are originally from other countries. Each one comes to the program with a variety of goals, everything from what direction they should take their research to building social networks.

Eve Metto and Bilin Tsai
Assistant Professor Eve Metto, Department of Chemistry and Biochemistry, is originally from Kenya. She came to the U.S. in 2007 for graduate studies and taught as a graduate assistant. UMD is her first formal appointment; she started in January 2014.

Metto was seeking a mentor to help her get acclimated to UMD. She found one in Professor Bilin Tsai. “Bilin is really an ideal mentor because she has not only faculty experience but administrative experience as well,” Metto said. Because Tsai is the head of the Chemistry Department, Metto is able to get advice from someone who understands her field of study. “Sometimes the head of the department is just your boss. It is more of a relationship when the head of your department is also your mentor. It’s taking a shorter time to feel at home.”

Tsai believes that mentoring offers benefits to both parties. “I think a lot of times we think of mentoring as just benefiting the person being mentored, gaining knowledge and building a network, but it’s also a growth opportunity for me. It reminds me what it’s like to be new. I’ve had good mentors at various stages in my career. Now I can support someone who is starting out, to help them become successful,” Tsai said.

Mentors and mentees were given a list of ideas for building their relationship. At their first meeting, Metto shared her teaching philosophy and CV. “Bilin gave me good information. I’m learning a lot. She has so much experience teaching undergraduate chemistry. She understands students, and she is helping me learn my way around the department. I believe this program will be very beneficial,” Metto said.

Jordon Moses and Mary Cameron
Having graduated from UMD in 2014 with a degree in sociology, Jordon Moses is now the coordinator for mentoring engagement in the Office of Cultural Diversity. One of his primary jobs is facilitating a student peer-to-peer mentoring program that matches juniors and seniors with freshmen. Currently there are about 50 students in the program. “We want students to feel welcome and at-home here,” Moses said. As a student, he was a mentor in the program.

Now, as a fairly new UMD employee, Moses is looking forward to having a mentor’s perspective. He was matched with Mary Cameron, associate director and interim co-director for Human Resources and Equal Opportunity, who has worked both as an administrator and a faculty member at UMD. “To me, it was important to have a Black American mentor who has worked in higher education and has access to the perspective of longevity,” said Moses who is of African American ancestry. “I wanted someone who could speak about how we retain our culture, support our beliefs, and last in this rough environment.”

Cameron is looking forward to their first meeting. “I want to know what Jordon’s goals are, where he wants to be in 5-10 years, does he have plans to further his education, etc.,” Cameron said. “I can certainly share my UMD work experiences, where I started, where I am today as well as my educational journey. I think it would be helpful for us to talk about the importance and usefulness of volunteering to serve on committees and being involved in the broader Duluth community,” she said.

Moses is proud to be a part of the pilot group and would like to see it become a successful venture. “I’m hoping UMD as an institution will support the program. I believe it could be an effective and innovative way to attract and retain faculty and staff of color,” he said.

Cameron believes the program isn’t just about making faculty and staff of color successful, but that it will have a positive affect on all UMD faculty, staff, and students. “I wanted to be part of this program because I am in total support of UMD’s Goal 2 from the strategic plan, specifically recruitment and retention of students, faculty, and staff. I realize how important it is for us to prepare our students for a global world. There is value in learning and working with people who are different from you,” she said.

Wenqing (Lennie) Zhang and Daniel Hsiao
Associate Professor Daniel Hsiao, Department of Accounting, is originally from Taiwan and has been teaching at UMD for seven years. “I had some great colleagues who helped me,” he recalled. Now he looks forward to being a mentor and paying-it-forward.

He was matched with Assistant Professor Wenqing (Lennie) Zhang, from the Department of Management Studies, who is interested in both the academic and the social aspects of the program. “I’m hoping to get some guidance on research, either ideas on research or perhaps collaborating on research,” Zhang said. He'd also like to get the benefit of Hsiao's experience working with UMD students. “A mentor can give me a better understanding of students and how they learn,” Zhang said.

While Zhang, who is originally from China, has only been in Duluth for three months, he's no stranger to cold weather (he earned his Ph.D. in Montreal). Still, he may benefit from Hsiao’s years as a Duluthian. “I hope to share some of my survival skills both at UMD and in Duluth.” That advice includes being active, being creative, and sharing a meal. “Get together with friends and have a potluck,” Hsiao suggested.

Growing the Program
Feedback from participants at the end of the program will help shape it for the future.

For more information about the mentoring program, contact Ariri Onchwari or Insoon Han.