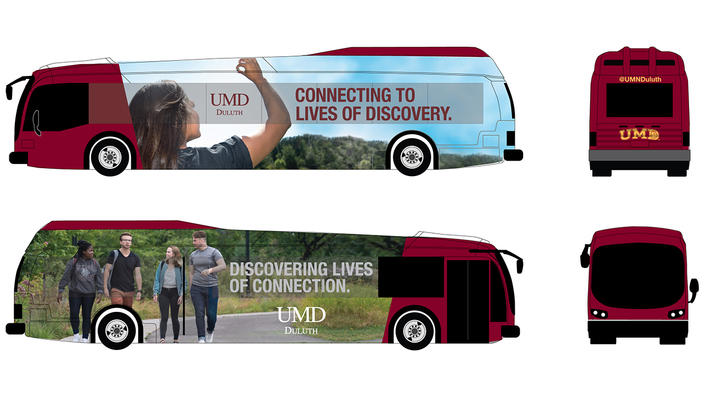 UMD and the Duluth Transit Authority are celebrating their commitment to the environment with a news conference on Friday, October 12 at 10 a.m. in the Kirby Bus Hub, 1120 Kirby Drive. Vice Chancellor for Student Life and Dean of Students Lisa Erwin and DTA General Manager Phil Pumphrey will speak from 10 - 10:15 a.m., followed by photos and interviews.

It’s a Wrap… and a Debut

This is the debut of one of seven electric busses that the DTA is introducing into its fleet. UMD is expressing its support for this environmentally innovative new bus by wrapping it in UMD’s brand.

The electric bus, made in a Greenville, South Carolina factory, produces zero emissions and can go 200 miles on a charged battery. It gets 20.8 miles per gallon, compared to 3.86 miles per gallon on a diesel engine.

“UMD is proud to put advertising dollars behind this green transportation in the form of a bus wrap, as sustainability is one of our core values,” says University Marketing and Public Relations Director Lynne Williams.

Patrick Keenan, director of Student Life Operations, says the wrap of the electric bus is also recognition of the importance of the UMD/DTA partnership. “We’re pleased to be associated with the new electric buses and look forward to our continued relationship with the DTA.”

In addition to introducing the DTA’s electric bus, the news conference also showcases the ongoing UMD and DTA UPass partnership. The UPass program offers UMD’s students and employees unlimited rides anywhere in the Duluth and Superior. Students are assessed $16 per semester and employees pay $72 per year.

The Upass partnership was first introduced 18 years ago and has grown to include approximately 6,500 unique riders who are taking the bus just under 400,000 times per year.

“We’re doing two things through the UPass program,” explains Keenan. “We’re providing an alternative to driving to campus, which reduces the need for parking, and we’re supporting sustainable transportation.”