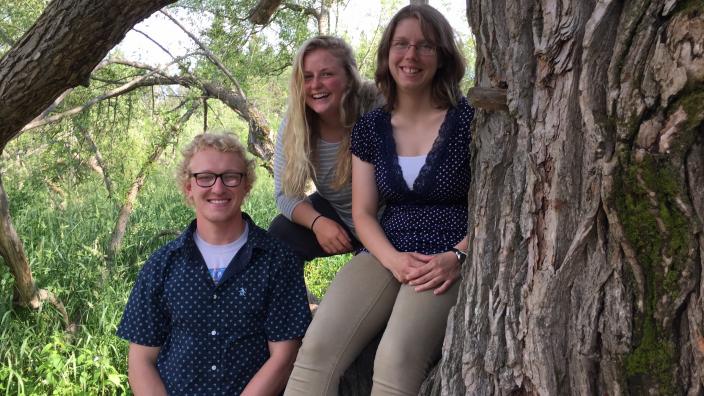 “When children splash and make waves, they are learning about the physical world in a way that they can't on manufactured playground equipment,” says Mandi.

Ayla Erickson and Nicholas Wagner join Mandi at the Hartley Nature Center,  a 660-acre educational park in Duluth. They’ve come to talk about the Nature Play movement and why it has been called revolutionary.

These three students were part of the UMD team, led by UMD Professor Ken Gilbertson, who received the 2017 University of Minnesota Resilient Communities Project (RCP) Outstanding Team Student Project award. The UMD team placed first out of 45 classes across the university that were part of the Brooklyn Park partnership.

A group of children run past, sticks in hand. “Children can use their imaginations in the outdoors,” Ayla says. “They take risks, and they have endless possibilities for creativity.”  She’ll graduate with an environmental education degree in 2018.

“I love how kids learn,” Ayla says. “In structured play everything has been created by adults, like mowed lawns and rules. In nature play, if a child wants his coat on, he keeps his coat on. If another child wants to take her coat off, she gets to.” Interaction between children is freer. “Kids make up their own rules for games and learn about cooperation and leadership.”

Nick, a 2017 graduate with an environmental education degree, is a naturalist for the Hawk Ridge Bird Observatory. He has an interesting viewpoint. “I look at nature play and environmental learning, and I wonder how I can bring that back to the city of Chicago, where I grew up." He talks about rooftop gardens and creating spaces for people to experience native plants. “It’s about politics too,” he says. “When people grow up appreciating trees and nature, they’re more likely to vote for preserving the wilderness and national parks.”

Nick, Ayla, and Mandi, along with three other UMD students, Brinda Dewan, Nova Miller, and Kelley Probst, put their education into action at the Brooklyn Park Recreation & Parks Department, where they created a plan for nature play.  The project was part of Ken Gilbertson's Environmental Education Operations and Management class. "Ken was there whenever we needed him," says Mandi.  "Professor Julie Ernst also mentored all of us. She was a huge influence in my search to learn more about nature play." 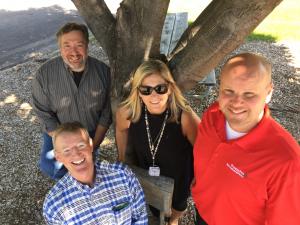 Mike Greco from the Resilient Communities Project, UMD professor Ken Gilbertson, and Jody Yungers and Brad Tullberg from the City of Brooklyn Park, all provided support for the UMD students' nature play plan.

The UMD project would not have reached its high level of success without the RCP and the partnership with the Brooklyn Park team. Mike Greco is the co-founder and director of the University of Minnesota RCP which provides research and technical assistance to communities in Minnesota. "Last year, we matched student teams with 24 projects in the city of Brooklyn Park. The UMD match was a good fit.” Mike says. The Long-Range Management Plan: Nature Playscape Project and the Health Benefits of Nature is detailed. "They documented every park area in the city. They outlined many good alternative play areas and presented three great plans," he says. "Brooklyn Park is also pleased. They've already made changes."

Jody Yungers, parks and recreation director, is enthusiastic about the future. “We’re helping our community by giving parents and children an alternative play opportunity. As a culture we hover over our kids,” she says. “The UMD students gave us designs for natural areas that change the dynamic. We’ve already implemented one of their suggestions,” Jody says. “We incorporated a play area into our Nature Preschool early learning playground.” Logs, tree trunks, sand, and sticks of all sizes allow children to be creative and collaborate as they build forts and huts.

One of the plans calls for a “Hobbit House” in a future Jewell Park nature play area. “I just love that idea,” Jody says. “There’s an existing slope so it is the perfect place to put a little house in the hillside. It just invites curiosity and imagination.”

Brad Tullberg, parks and facilities manager, is the force behind the plan. The city’s forestry crew constructed the first of two nature play areas in the park system. The maintenance crew has planted butterfly gardens that incorporate milkweed plants to support the growth of the butterfly population.

Brad appreciates the consideration the UMD students gave to Brooklyn Park’s diverse population. “There are more than 7,000 people from Liberia or of Liberian descent in Brooklyn Park, and they use the park system for walking, visiting the lakes, and picnics,” Brad said. "There is lots of diversity in the city, in both population and income, and the student's addressed everyone's needs."

Brad says introducing the multicultural community to natural areas within Minnesota is as important as it is back in their home countries. “Wooded wilderness signals danger to some groups. We want to encourage our immigrant community members to engage with our natural world and all its benefits.” Brad likes how the UMD proposal fits in with initiatives already underway. “We’ve got a program where police officers fish with kids,” he says. “We also bus kids from apartments to the parks.”

Brad and Jody share a dream. “We’re building a relationship between the environment and all the kids in the area,” Brad says. Jody goes a step further, noting “the importance of making nature connections with kids is critical to our future.” Jody refers to policies that relate to protection of the natural world. “Today’s youth will be tomorrow’s policy makers and if they have no connection to the natural world, they will not develop a love for nature,” she says. “You only protect what you love.”