One Goal: Making a Big Impact in a Small Town 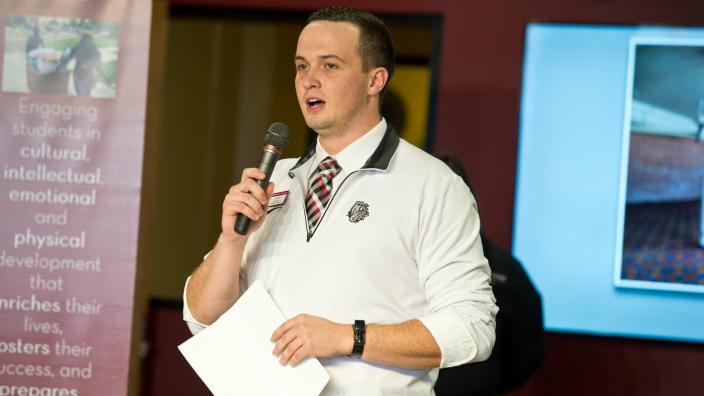 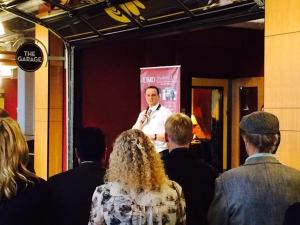 Nathan Ernst: He's played many roles in many places, but his heart is still in his hometown

Student body president, full-time student, Naval Reservist and part-time employee. These are roles that complete Nathan Ernst. But there is more to every human being than the roles they play. There are stories behind each role.

Nathan and his family moved four or five times before they arrived in Becker, Minn., for his seventh grade year. Unbeknownst to him, it would be the place that stole his heart. From then on, everywhere he went was just a road that would eventually lead him back.

Becker is a tight knit community. Nathan says it is so small that, “your friends’ parents become your parents too, and the town shuts down on Friday night for football games.”

In high school, Nathan could relate to all of his teachers on a personal level and he said almost every one of them had an impact on him. His American government teacher, Ms. Abrahamson, fueled his passion for politics. Another favorite teacher coached soccer. That’s why, despite the fact that Becker was a football town, Nathan played soccer. Perhaps they weren’t the best team, but they had fun, and Nathan credits his coach for fueling his passion for working hard.

On January 11 of his senior year in high school, Nathan enlisted in the Navy reserves. “It was important to me to be part of the military and go to school because I wanted to serve, but I also wanted a college education,” he said. While in the reserves, Nathan can go to college full time and participate in the Navy on the side.

When it was time to pick a college, Nathan chose Auburn University in Alabama, in order to get out of Minnesota for a little bit. After two months of basic training in Virginia and seven months of Naval school in Virginia Beach, he realized something. He didn’t want to be away from his home and Minnesota, after all.

So UMD was the next best thing. Nathan declared political science as a major and did everything he could to build up his resume. That’s when Student Association (SA) came into play. “From there, life just snowballed,” Nathan said.

Nathan knew he could potentially make a lot of money in a political science career, but that wasn’t what mattered to him. Something was missing. “My parents always told me to do what makes me happy.” Thinking back to the one place he loved, and the teachers he met there, he figured out what would truly make him happy — teaching. In his sophomore year, Nathan declared secondary education as his new major. “I’ll graduate in five years, not four, but I figure it will be an advantage.”

In Spring 2015, Nathan was elected Student Body President for the 2015-2016 school year. His main job is to see that everything in SA is running smoothly and to be a liaison between the students and administration.
When asked how much he has on his plate he replied with a smile, “Way too much.” But if there is anything his parents taught him, it’s that school comes first. Nathan has to balance his never ending schedule of SA, the reserves, homework and a 20-25 hour-a-week job as a banquet server. That gives his planner, checklists and Google calendar a workout.

Luckily for Nathan, he works well under pressure. “I have one enormous ongoing checklist. I take it one day at a time.” His favorite days are Sundays when he can watch football from noon to 10 p.m. and do homework at the same time. He plans to run for student body president for the 2016-17 school year as well. As for his fifth year he wants to do more than serving as president. He wants to be an advisor to new students and to share his perspective on governance.

Nathan is looking forward to returning to Becker, to stand in front of his own class like he has always imagined. He says that will make all of the stress of college life worth it.