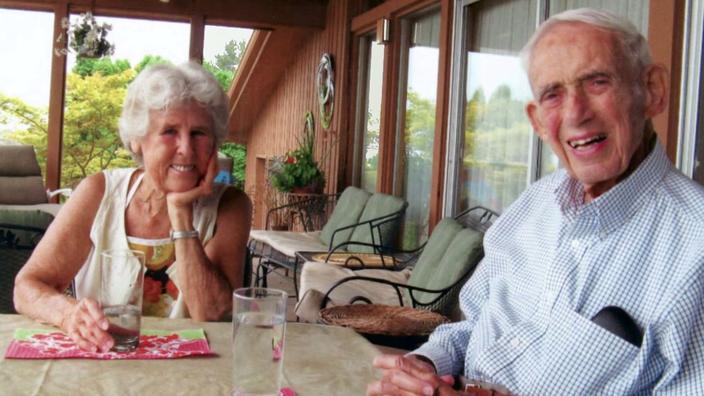 From DSTC to the Manhattan Project

When Nathan E. Ballou played the tuba in the Duluth State Teachers College (DSTC) band and studied chemistry with Professor John C. Cothran, he had no idea that within one year he would be deeply involved in a secret race between the United States and Germany to see which country would develop the first atomic bomb. In an amazing series of events, Ballou found himself working on the Manhattan Project in the summer of 1942.

Here's how it happened. After graduating from DSTC in spring 1941, Ballou attended the University of Illinois to work on his doctorate in chemistry. He remembers "sitting in his dorm room on a Sunday afternoon in December, listening to the radio with some of my classmates." They heard the announcement of the attack on Pearl Harbor. "We realized that it would affect us, but we weren't sure how." War was declared, and the draft was instituted, but it took a while for things to go into motion. Ballou received a student deferment in order to finish out the school year. Shortly after that, a recruiter from the government interviewed students who might be interested in war-time work. Ballou was interested and was hired, but at the time, he didn't know what exactly he would be doing. He left the University of Illinois and went to work in a research lab at the University of Chicago.

"As we got into the job, the nature of the work was revealed," he said. "We were working on the atomic bomb project." It was called the Manhattan Project. The groups were assembled to work on all of the different aspects of creating fuel. The name didn't reveal anything about the nature of the project. The two efforts of the project were to produce plutonium in a nuclear chain reactor and to separate the uranium-235 isotope from the more abundant uranium-238 isotope. Ballou worked in one of the groups in the plutonium program.

The first objective of the plutonium program was to produce a nuclear chain reaction by the end of the year. The world's brightest scientists assembled in Chicago. "We worked with the luminaries," said Ballou. "Enrico Fermi, Edward Teller, Leo Szilard, and Glenn Seaborg. They were all there, even Arthur Holly Compton, the Physics Nobel Prize winner."

The scientists established the practice of evening lectures and each presented their specialties. "Szilard, Fermi, Seaboard, and Compton all gave lectures. We became radiochemists together. In the evening we learned, and during the day we did laboratory work."

There was a tremendous drive to get the bomb. "We knew the Germans were working on it," said Ballou. "They started a year ahead of us. Werner Heisenberg, Otto Hahn, and Fritz Strassman, the leading German scientists, were in Germany conducting fission research. There were speculations about how they would do it. We were using graphite as a moderator, to slow the neutrons down. We thought the Germans would use heavy water as a moderator because they had captured the heavy water plant in Norway."

Ballou was put in a group under Charles D. Coryell to separate fission products. "Our group discovered a large number of unknown radioisotopes," said Ballou. "It was fascinating because so much needed to be identified." It is complicated to describe the work Ballou conducted. Physicists and chemists know that atoms of a particular chemical element may have many isotopes with the same atomic number but different atomic weights. If an isotope is radioactive, it is referred to as a radioisotope. In Coryell's group, Ballou examined fission product radioisotopes that had been produced in cyclotron irradiations of uranium. A cyclotron accelerates particles (protons) around a circular race track in a magnetic field with periodic pulses of an electric field.

These high-energy particles strike a target such as uranium and produce fission products, which are dissolved and the radioisotopes of each element are separated into pure forms. Then Ballou and others in the group analyzed them to measure the half life, decay routes, and radiation characteristics of their beta- and gamma-rays. "We were responsible for identifying and characterizing hundreds of fission product radioisotopes," Ballou said. "In addition, we needed to determine the fission yield of each radioisotope. What were the most important radioisotopes? How did their yields compare? We had to provide the quantitative data."

The work of Ballou and others in Coryell's group supported parts of the plutonium program. These included the chemical process to be used for separating purified plutonium and evaluation of radiation properties and hazards of products of nuclear reactor operations.

Fermi built an experimental "pile" to demonstrate the feasibility of a controlled nuclear chain reaction. He assembled the components (6 tons of uranium and 250 tons of graphite for use as a moderator) in a squash court in the abandoned University of Chicago stadium, and on the afternoon of December 2, 1942, the pile achieved a self-sustaining nuclear reaction.

From that time until the war's end in the summer of 1945, experiments for the Manhattan Project at the University of Chicago and the Oak Ridge National Laboratory consumed Ballou's life. Each week, he worked from Monday morning until Saturday at noon. "We would even have to come in on Sunday or in the evenings if we were following the decay of a radioactive product," he said.

Ballou stayed on at Oak Ridge for a few months after the war to finish up his research and in early 1946, he went back to graduate school to work on a Ph. D. at the University of Chicago. "One of the nice things about that arrangement was they allowed us to use our wartime research as our thesis. That was a big advantage." Because of his wartime research efforts, Ballou received a National Research Council Fellowship. "I didn't have to teach," he said. "It was very comfortable." Ballou did have to study hard for his coursework and preliminary chemistry exams. Each preliminary exam was a full day, and he took four of them: organic, inorganic, physical, and analytical.

The fission product research done by Ballou and others in Coryell's group was collected and published as part of the National Nuclear Energy Series, which was an account of the research done in the Manhattan Project.

Ballou went on to take a postdoctoral fellowship with Glenn Seaborg at the University of California at Berkeley. A year later, he was hired by the U.S. Naval Radiological Defense Laboratory (NRDL) in San Francisco. His task, one at which he worked for about 20 years, was to look into radiological problems that the Navy might have in the nuclear age. His team looked at the radiological situations arising from explosions of nuclear devices that were occurring in the U.S. nuclear testing program at the atolls in the south Pacific Ocean. He also continued his research in identifying and characterizing new fission product radioisotopes.

During this time he attended a deep underwater explosion of a nuclear device. "We traveled far into the Pacific, to an area with little sea life," he said. Several members of his team from the laboratory were stationed on the carrier as observers. "The detonation was so deep, there wasn't a mushroom cloud," Ballou said. "First a shock wave traveled up to the surface and threw a fine spray several hundred feet into the air. We could feel the shock wave hit the ship. Then a bubble worked its way up to the surface and burst."

In 1959, Ballou took a year and a half break from NRDL and was loaned to the Belgium Nuclear Energy Center, about 50 miles from Brussels, to take over the direction of the chemistry department. At that time, Belgium had control of what was known as the Belgium Congo, in Africa, where there were large uranium deposits. "I was able to expand my knowledge and experience in the nuclear field, as well as to provide some assistance to their research programs," he said. "It was also a chance to live in Europe."

In 1969, Ballou left the naval laboratory and took a job at the Pacific Northwest National Laboratory operated by Battele in Richland, Wash. It is the job he still has today, working more than half time, at age 85.

"I'm working on Department of Energy problems now," he said. Ballou still conducts research in radiochemistry, mass spectrometry, and new analytical techniques. "I work with post docs, and I really enjoy that," he said.

Einstein's relativity theory marked, above all, the point from which there was no return. The harnessing of the atom in the 1940s changed the nature of war forever, but it also offered a new source for electrical power generation, and improved medical diagnostic techniques. Nuclear technologies have stirred emotions and controversy, but the engineering achievements related to their development remain among the most important of the 20th century, and Duluth State Teachers College alumnus, Nathan Ballou, was right there making those achievements happen.

"I'm deeply grateful to the college and to the devoted teachers who gave me such a good start to a full and satisfying career," he said.