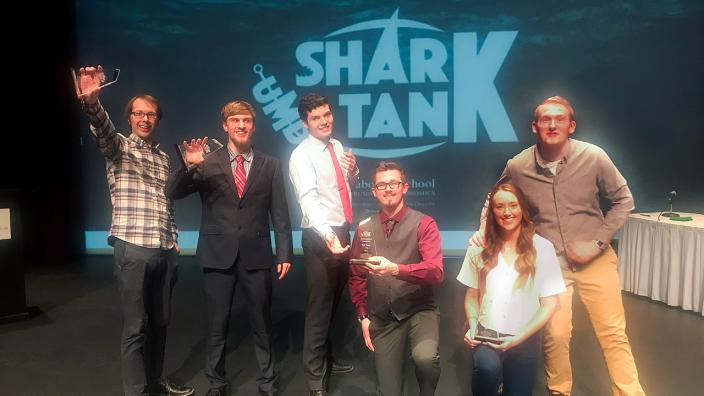 Pairing mushrooms and coffee isn’t something you would typically do. But Kevin Swanberg did think about that very thing and earned himself $1,500.

His entry in the Labovitz School of Business and Economics' Third Annual UMD Shark Tank, called Locaspore, wowed the judges of the event and netted Swanberg the first place prize.

Locaspore, a negative-waste urban mushroom farm, uses waste byproducts from local coffee roasters, such as Duluth Coffee Company and Alakef Coffee, to grow fresh, healthy mushrooms at a price that is competitive to large mushroom farms.

Swanberg, who earned his Masters in Liberal Studies from the College of Liberal Arts in May 2018 and his B.S. in Linguistics in 2015, found that with 50% of the U.S. mushroom supply coming from Pennsylvania, transportation costs are not environmentally sustainable, and the product is not as fresh as it could be. Locaspore’s product is fiscally profitable, environmentally responsible, and ecologically innovative.

Also earning prizes with their product/service were:

Judges of this year’s UMD Shark Tank were:

Learn more about the College of Liberal Arts.

Learn more about the Labovitz School of Business and Economics.